Home > Features > Deal or no deal? 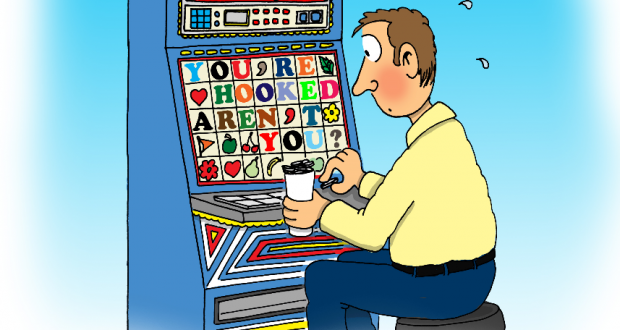 Deal or no deal?

While Queenslanders spend up to $175 million at the pokies each month, some congregations are receiving a portion of the state government’s take in grant allocations. Bruce Mullan explores the ethics of churches accessing gambling revenue.

Australians spend a staggering $20 billion dollars each year on gambling, and in 2013 Queenslanders spent more than $2.1 billion on pokies alone—the equivalent of $464 per person.

Gambling has been with us a long time. The earliest six-sided dice date from about 3000 BC and were unearthed in what is now Northern Iraq. Ivory, porcelain and stone dice (some of them loaded) were found in the ruins of Pompeii after it was destroyed in AD 79.

Now the options are extensive. Punters can choose from casinos, poker machines, lotteries, racing and sports betting, not to mention the meat tray raffle. The introduction of internet gambling has further increased accessibility and television advertising for gambling options is widespread.

The ethical response to this proliferation of gambling options and activity unearths a crucial distinction between those Christians who believe gambling is inherently wrong on moral or religious grounds, or both, and those who believe it is not.

The historic denominational traditions that made up the Uniting Church in Australia had strongly entrenched views that gambling, per se, is wrong.

Traditionally arguments against gambling focus on questions of stewardship of resources, the importance of earning one’s income, the incompatibility of gambling with Christian ethics and Christian responsibility to protect those who are weaker.

But most would agree that the real danger is when individuals engage in excessive gambling. The Queensland Council of Social Services estimates that almost eight per cent of Queenslanders are at risk of developing gambling-related problems (this equates to 68 000 adults), and that 14 000 are already problem gamblers.

Clubs and other gaming machine operators claim that poker machine revenue makes an important contribution to local communities including the operating costs of sporting facilities, football grounds, bowling greens and golf courses; donations to worthwhile causes such as charities, local sports teams, and the reallocation of a small proportion of gambling tax money for community groups.

UnitingCare Australia research in conjunction with Monash University (Assessment of poker machine expenditure and community benefit claims in selected Commonwealth Electoral Divisions, April 2012) suggested while in greatest need of community developments, those communities with low levels of median income are also where the largest gambling losses occur, both absolutely and proportionally.

Gambling addiction is also likely to be a key factor in intergenerational deprivation in disadvantaged communities. The public health and community welfare implications of this are significant, not simply for current users, but for their families, children, neighbours, employers and the community generally.

A number of funds, established between 1987 and 1996, were designed to invest in not-for-profit organisations from the funds raised from gambling taxes but the real question is whether that investment offsets the substantial damage caused by the gambling that funds it.

The UnitingCare research suggests the community benefits claimed by gambling operators do not offset these impacts to any serious degree, if at all, and while churches have generally condemned gambling, some congregations and agencies have been the direct or indirect recipients of gambling proceeds.

In 1980 the Queensland Synod reaffirmed its complete opposition to gambling which “encourages a spirit of acquisitiveness in the community” and particularly opposed the introduction of any new gambling initiatives such as poker machines and casinos.

In the same resolution the Synod asked that “ways and means be sought for a percentage of Government revenue from gambling facilities be applied to the rehabilitation of the social victims of gambling.”

Jupiters Hotel and Casino on the Gold Coast was the first casino opened in Queensland in 1986. Poker machines were introduced to Queensland in 1992 under the Goss government.

“The problem with poker machines in my view is that the people who mainly play them are the people who can least afford to do so. I wish I hadn’t done it,’’ he said.

The UnitingCare Australia research confirmed that poker machines are an extremely inefficient and high cost method for funding community sporting and charitable activities.

She described poker machines as “a business model based on addiction”.

“Forty per cent of profits from poker machines come from addicts; it’s morally bankrupt,” she said. Community benefits constitute a very modest proportion of the value of user losses garnered by poker machine operators—less than 1.5 per cent according to the UnitingCare report.

The report concludes that as a mechanism for providing benefits to community, poker machines are “demonstrably extremely inefficient, imposing significant costs and transferring small proportions of the revenue generated from player losses”.

To apply or not to apply

The stated aim is “to allocate funding to not-for-profit community groups to enhance their capacity to provide services, leisure activities and opportunities for Queensland communities.”

While the amounts expended on community benefit purposes appear to be large, they only seem so if they are reported without reference to the total level of gambling losses and harmful impact on individuals and community.

Given that the community benefits received through gambling revenue are very small, and an almost insignificant proportion of the amount of money lost by gamblers, the question remains about how the church should respond.

Some congregations have debated the ethics of applying for and accepting funds from the Gambling Community Benefit Fund and others are invited to do so.

What will your congregation do?

A discussion guide to assist congregations to talk about this issue is available from ucaqld.com.au/social-responsibility/ethics
For more information about poker machines and their impact visit the Australian Churches Gambling Taskforce website gamblingreform.org