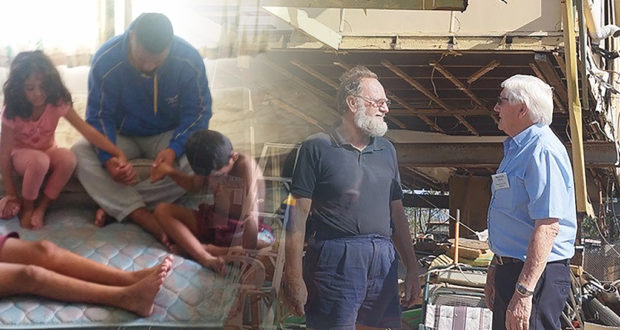 Cyclone Debbie may have vanished from the news but the work of rebuilding and strengthening local communities is gaining traction, thanks to Synod appeal funds from donors nationwide. Dianne Jensen reports.

When Cyclone Debbie let loose its fury on the north Queensland town of Bowen, Uniting Church minister Rev Tevita Mone and his five children took refuge in the church office. As the winds and rain raged outside, six-year-old twins Matiu and Eita kept asking if they were all going to die.

Tevita, a single father whose wife died in 2015, tried to quiet their fears.

“We spent time praying, playing cards, wiggling to Tongan music, munching anything we can munch, and doing anything that could seize their minds off the fierce wind outside. It was scary and so frightening. I had to remain strong and let them see me in calmness with no anxieties, so they can feel peace,” recalls Tevita.

“To my surprise, I was notified that we were to drive to Townsville and dwell in a motel for two nights and acquire proper meals,” says Tevita. “I had the biggest smile I could imagine. We progressed to Townsville and the kids rushed into the room screaming … lights, television, hot water and air con! I walked off to our van, bawled with tears and thanked God.”

The Uniting Church Foundation Disaster Relief Appeal was launched in April to support recovery and build resilience following the devastating effects of Cyclone Debbie on communities in north and central Queensland. Funds are disbursed through the Queensland Synod Disaster Response Committee (DRC) to presbyteries and congregations for local disaster relief projects outside the mandate of government or agency funding.

In the immediacy of the natural disasters, funds were directed to urgent needs such as emergency accommodation and the supply of generators on rotation for communities in North and Central Queensland.

Four months later, the focus of the disbursement of funds is to enable congregations and presbyteries to undertake specific projects to provide pastoral support, rehabilitation and community recovery programs.

One such project is the appointment of disaster recovery chaplain Rev Malcolm Bottrill for a period of three months. Malcolm is travelling within the Presbyteries of Central and North Queensland from community to community in his caravan, providing pastoral and emotional support to people in the Bowen, Proserpine, Whitsunday, Cannonvale, Mackay and Sarina areas.

“Both in Bowen and in Proserpine, the person serving me in a business has seen my name tag and wanted to talk through issues. People have seen my info sheet around town and the article in the Mackay paper, and are responding,” writes Malcolm in his first report.

With a discretionary fund from the DRC on hand, Malcom is able to quietly assist those in need as he heads out to small beach communities such as Dingo Beach and Hideaway Bay or drops into a pub or the local Proserpine show.

“I have found that people are wanting to talk to someone who is not tied to government authorities, insurance companies, etc. Some business people are furious over insurance issues, but most conversations are at the emotional and mental health level,” he says.

“A significant factor is that very often responses are multi-layered, as their Debbie experience has brought other emotional and mental health issues to the surface. Some of those issues go back many years.”

Appeal funds are also supporting the ministry of St Paul’s Uniting Church congregation in Mackay through crisis counselling services. Existing emergency relief services were inundated as soon as the cyclone struck, leaving 60 000 residents without power for several days to a couple of weeks.

Congregation minister Rev Dr Julia Pitman says that while those in stable relationships and accommodation can survive a few days without power, the same is not true for those already living with disadvantage in a community which has had more than its fair share of natural disasters.

“For people who are vulnerable, a tropical cyclone can be an added stress to an already difficult life—its effects can send people into greater poverty and distress than they experienced before,” says Julia.

St Paul’s has also received grants from Assembly and the Redcliffe Uniting Church Community Bequest Fund and vouchers from Target to support its significant outreach program.

“The emergency relief program of St Paul’s involves a team of people in various roles: counselling, packing bags of non-perishable food, assisting in the Bargain Centre (op shop) and the church treasurers who assist with paying bills on an on-off basis,” she says.

“St Paul’s will use the grants and in-kind support to assist people with crisis counselling—many of whom report adverse impacts with long-term consequences as a result of the cyclone. Support offered includes food, clothing, vouchers and payment or part-payment of bills or rent.

“Where possible, the church also provides spiritual support: a prayer, discussion of the Christian faith and an invitation to become part of the church community. As a result of our emergency relief program, people who have sought assistance from the church are attending church services, becoming church members and their circumstances are improving.”

When Synod chief fundraising and marketing officer Raushen Perera sits down to write letters of thanks to the individuals, groups and churches who continue to respond to the Uniting Church Foundation Disaster Relief Appeal, she’s still inspired and moved by the heartfelt generosity of donors.

“Although the disaster occurred in Queensland, there has been a ripple effect of support from congregations in New South Wales, South Australia, Western Australia, Victoria and Tasmania. Interstate Synod offices and churches have helped spread the message by organising collections and this has resulted in a wave of support even from those who are far from the centre of crisis,” says Raushen.

“Our appeal has always been grounded in the church’s commitment to support communities beyond the immediate crisis, and that vision of empowering people and building resilience at the grass roots level strikes a chord with many different people.

“From someone living interstate who once lived in one of these affected regions to non-Uniting Church organisations renting Uniting Church premises to church members who give sacrificially—our call for help has been met with generosity and compassion.”

Donors to the Foundation appeal include Pastor Ian Ness from Burdekin Uniting Church (Ayr and Home Hill) who gave a personal donation in addition to the special purpose collection by his congregation. Ian is one of the volunteers at the church’s Bluey’s thrift shop.

“We gave because anyone who works in a thrift shop knows how tough people are doing it, and we know from personal experience in the Burdekin how much harder it is after a cyclone. We also know people who are in areas affected by Cyclone Debbie,” says Ian.

“We would like people to know that help is available, and that people still care long after the cyclone has gone from the headlines.”

“I read in your newsletter highlighting a need to make a donation for those affected by the natural disaster—Debbie Cyclone. Our board and I agreed to donate on behalf of our church,” says Alex.

A donation by the congregation at Argent Uniting Church in South Australia strikes a poignant note. Their final offering on the day of the church’s closure on 30 April was for the Queensland Synod disaster appeal.

A pearl beyond price

Rev Linda Hamill from the DRC says that recovery will be a long-term process as the economic impact on business and primary industries unfolds across the region. In this fraught space, the local church is in a unique position to reach out to those who are struggling.

“Recovery takes five years or more,” she says bluntly. “Often, people feel forgotten in the year or so after the event and do not feel they have anywhere to turn for help. The church can be present and in dialogue with community to determine what needs there may be a couple of years later and request funding at the time a need is determined.”

And while the financial costs of recovery are inescapable imposts on these crisis-weary communities, the value of the support of the wider church is a pearl beyond price.

“The ways that other congregations can help are as creative as the people who want to help,” says Linda. “Some time ago, city churches had a long-term relationship or partnership with a country church. Many of these connections have been lost over time. If you are serious about helping, the help should be long-term and rebuilding those old partnerships could be one way of always knowing what is going on and how to help.”

For more information contact the Synod office at disaster.relief@ucaqld.com.au 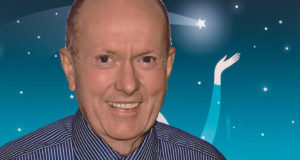