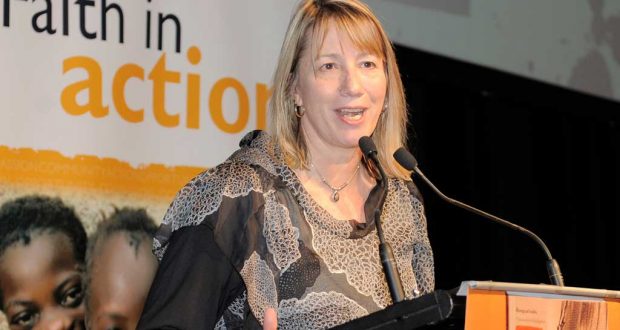 Carolyn Kitto’s fourteen-month trek around Queensland to take the pulse of presbytery life has produced a wide-ranging report which doesn’t pull any punches about what lies ahead. Journey talks with Carolyn about what she discovered.

Uniting Church member and mission consultant Carolyn Kitto doesn’t mind being on the road. Her three-decade career in youth work, Christian education and strategic planning and consulting for churches already has taken Spirited Consulting (the ministry she and Fuzz Kitto operate) to 24 denominations across 43 countries.

“Moving around a lot as a child gave me a huge curiosity about people and an appetite to understand their different contexts and motivations—and hopefully also a capacity to relate to all different kinds of people,” says Carolyn.

In 2015 the Presbytery Synod Interface—which includes presbytery ministers, the moderator and general secretary and UnitingCare Queensland’s director of mission—engaged Carolyn to conduct a hands-on survey of the life and mission of Queensland Synod presbyteries.

Over the following months she undertook workshops at presbytery meetings, site visits with congregations, face-to-face interviews with ministers and pastors and meetings with various executive committees, building a picture of the Synod’s current context and helping to foster a framework for understanding the church’s overall mission.

This time, it was her own church home in the spotlight.

“The thing I love most about the Uniting Church is that we are a church, when we’re at our best, where people who come from entirely different theological positions and platforms on a whole range of issues can agree on what the mission of God is,” Carolyn says.

As the consultations unfolded, the job began to take on a “prophetic” dimension.

“The role of the prophet is to give people reality of the context that they’re in and to help them to hear what God might be saying to them in that context. I found the vast majority of people appreciated that, and there was a willingness to engage the future in a different kind of way.”

Like every prophet worth her salt, Carolyn says that the church must not sugar-coat the significant challenges of the next decade.

“The church is going through a huge time of upheaval and the reality is that much of what we have currently we don’t need for the next stage of our lives. The ridding of that is very painful.

Doing nothing is not an option

The report notes that change involves hard questions about where the church strategically focuses itself around the state, as well as re-articulating what a successful congregational ministry looks like in the new millennium.

“We either have lost or are fast losing where our strengths have been,” says Carolyn. “We’ve had churches who have been larger, that have been high mission capacity, generated leadership—many of those churches are slipping to be churches which no longer have that strength. So we need a concept of what successful congregational ministry looks like, and we need to make some decisions that strengthen what has been historically our core.

“We also need to help congregations move beyond the victim mentality of ‘This is all going to happen to us, please just make us feel better as we slide into the demise’ into thinking about the future that we can create together,” she adds.

“The best case scenario is that we build over the next five years and we identify the strategic places where we want there to be strong churches and we look to build.”

Carolyn identified that the Uniting Church has strong and vibrant community services agencies that need to partner with strong faith communities to be addressing the spiritual aspects of life.

It’s no surprise that one of the major crisis areas Carolyn identified was the church’s youth and children’s ministry and the knock-on implications for a decline in adult numbers.

“We need people going into ministry in their twenties so that when they’re in their fifties, they’ve got 30 years of experience. I think that’s one of the key things that we need to invest in. Is it a risk? I think the risk is much greater if we don’t.”

Carolyn found some inspiring signs of life in churches both big and small.

“There were so many churches that are doing great things. We need to rediscover how we recognise those things and affirm them … lots of churches who move beyond the idea that this is all about getting the bums on seats and meeting a budget and [who are] saying, ‘Actually we’ve got to find another way of doing this and we’ve got to take some risks’.

“The memories of hope with which we created the Uniting Church to be a true Australian church which engaged our culture and helped to transform it for the sake of the kingdom of God are strong, but what is even stronger amongst our people is the hope that they have for their children to have faith and for their grandchildren to have faith.”

Starting on the same page

Presbytery Minister of The Downs Neil Thorpe says that the consultation process has provided an opportunity for congregations to talk about their experience of being church in their communities, and the ways in which the presbytery could or could not assist them.

“Carolyn also spoke with some of our major committees, standing committee, presbytery pastoral relations—and they were very good conversations which sharpened our focus around mission,” says Neil.

“The most valuable thing coming out of the report were the models for how to understand our churches. Carolyn also provided us some very good biblical information, particularly around the church as it developed around Acts and the type of ministry Paul exercised. So we’ve got a number of biblical as well as missional models which give us a common language about how we talk about the mission of our congregations throughout the presbytery.”

Following Carolyn’s presentation to The Downs Presbytery in November, a mission task group was appointed and has undertaken a workshop.

The Presbytery Synod Interface is currently reviewing the findings of the consultation.