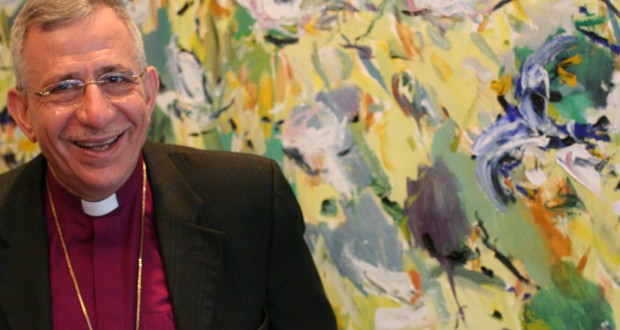 Bishop Munib Younan, Bishop of the Evangelical Lutheran Church in Jordan and the Holy Land, in Brisbane in September. Photo: Mardi Lumsden

Hope for the Holy Land

The Holy Land is stitched into the fabric of the Christmas story. Could Mary and Joseph make their way to Bethlehem in today’s conflict-ridden West Bank? Mardi Lumsden explores hopes for peace in Israel and Palestine.

From its beginning, Jerusalem has been a city in conflict, and the regions around have been conquered and fought over for centuries. Despite this, people of different faiths and cultures have lived side-by-side for hundreds of years. Israel and the Occupied Palestinian Territories are the backdrop of much of the Bible. Consequently, each Christmas thousands of Christian pilgrims journey to Bethlehem.

Bishop Munib Younan is the Bishop of the Evangelical Lutheran Church in Jordan and the Holy Land and the President of the Lutheran World Federation. Based in Jerusalem, he is also on the Council of Religious Institutions in the Holy Land, a group comprised of Jerusalem’s Jewish, Muslim and Christian communities.

The bishop was in Australia in September fresh from receiving the Al-Hussein Decoration for Distinguished Service from the King of Jordan for his work promoting peace in Israel, Palestine and Jordan between Christians and Muslims.

Australian media coverage of Middle Eastern conflicts focuses on religious extremism, but the bishop insists the problems in the Holy Land are political conflicts, not religious ones.

“What is going on in Jerusalem is different to many parts of the world. In Jerusalem, I would say that we have freedom of religion, in Jordan, Palestine, Israel. Certainly we have some issues with our government, like any church in the world,” he says.

The Palestine Israel Ecumenical Network (PIEN) is a network of Australian Christians who seek lasting peace for the people of Palestine and Israel. Past Uniting Church President, Rev Gregor Henderson, is the co-convenor. Executive Officer Jessica Morrison says Palestinians’ daily lives are impacted in many ways by Israeli occupation.

“Israelis control whether Palestinians can build houses, where they can live, whether water flows in their taps, whether they can travel overseas, and indeed whether they can even get through a checkpoint to work in the morning. Perhaps access to water is where the disparity is most stark. Palestinians in the West Bank live on one sixth of the water than the illegal Israeli settlers on their land, and in Gaza 90 per cent of the water is undrinkable. This is not due to a lack of water, but the lack of access to water resources.”

There are currently 4.8 million Palestinian refugees registered with the United Nations (UN) Relief and Works Agency for Palestine Refugees living in 60 camps in the Middle East. Some camps are in cities, including Bethlehem, making the refugee crisis part of daily life in the Holy Land.

In 1979 and 1980 numerous UN Security Council resolutions called Israeli settlements (the building of mini cities on Palestinian land) illegal. In 2004 the International Court of Justice, the UN’s primary judicial body, also found the settlements to be illegal under international law.

“Settlements are a claim on land,” says Ms Morrison. “Each announcement of a settlement expansion reduces the chance of a viable Palestinian state.

“While the building of settlements is condemned around the globe, there has been little action to back up these words. Israel and the USA together are very powerful―militarily, financially and therefore diplomatically. If we really want to condemn settlements we need to follow the lead of the European Union who is refusing to trade with settlements.

“We must challenge any theology that suggests that God condones a military occupation, or requires anyone to leave lands for God’s will to be fulfilled.”

The Uniting Church in Australia Assembly Standing Committee resolved in 2011, on behalf of the Assembly, to join the boycott of products produced in Israeli settlements within the West Bank. This resolution was made in answer to a call for peaceful action from Palestinian Christians and in response to resolutions of the World Council of Churches and National Council of Churches in Australia.

Christians make up around two per cent of the population of the Holy Land. Bishop Younan says many Christians are leaving (if they can) in frustration or fear.

“They don’t see that peace based on justice is at all on the horizon. They have lost hope in any solution because they believe that the process is only for the sake of the peace process, not for finding a solution,” says Bishop Younan.

“Every politician in the world, who is in power, knows the solution,” says Bishop Younan. “Who of those politicians—Australian, United States, European Union, Arab countries or in Israel—dares to implement those?

“Some politicians think that we must solve the Arab Spring before they can solve the Palestine-Israeli conflict.

“If there is no solution and no peace in Jerusalem, the whole Middle East will not have a solution. Jerusalem is the core of the whole problem.”

The bishop says the Palestinian church is very clear on a peace solution.

“We believe in the two-state solution: the state of Palestine living side-by-side with the state of Israel on 1967 borders, living in peace, justice and reconciliation.

“Jerusalem must be shared. This is not only my position; it is the position of the 13 heads of churches in Jerusalem. It must be a city for Jews, Christians, Muslims, Palestinians and Israelis. No walls, no soldiers; an open city with free access to holy places for every human being.

“Neither Israel nor Palestine can live on their own.

“The value of the two-state solution … is a bless[ing] for both Israelis and Palestinians. If we miss that this year or next year, I am afraid we are getting into a darker stage.”

Absence of the global church

The bishop is alarmed at what he sees as the abandonment of the global Christian church.

“Sometimes we feel that western churches abandoned us. They give us lip service, they exchange smiles, but they don’t see the importance of keeping the Christians,” he says. “They talk to us about finances and the difficulties they are facing, but I think the difficulties we are facing is a question I would put to all Christian churches. If there are no Christians in the Middle East, and if all of us were to emigrate from Jerusalem, what is Jerusalem without the Christians?”

Indeed, what is the Holy Land and what claim do Christians have on holy places if there is no Christian presence there?

“The world is responsible because they did not solve the Palestinian-Israeli conflict to date. You cannot abandon the church that is trying to witness in this difficult and harsh reality.”

Bishop Younan knows a thing or two about the plight of displaced people. Both his parents were displaced as children after the creation of the state of Israel.

“They never taught me to hate the Jews or the Muslims. They taught me to love them. To love is not weakness. In such a political situation, to have the spirit of love is the strength.

“This is what my parents taught me and this is what I continue to carry in my heart, in my DNA; to love the other who is different.”

Bishop Younan’s message to the Australian church is clear.

“We are your sisters and brothers in Christ. Our mission is yours and yours is ours. Don’t leave us alone.”

For information on Jewish-Christian dialogue visit the Relations with Other Faiths section of assembly.uca.org.au 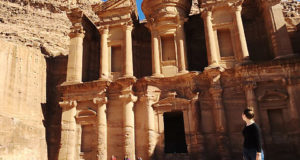