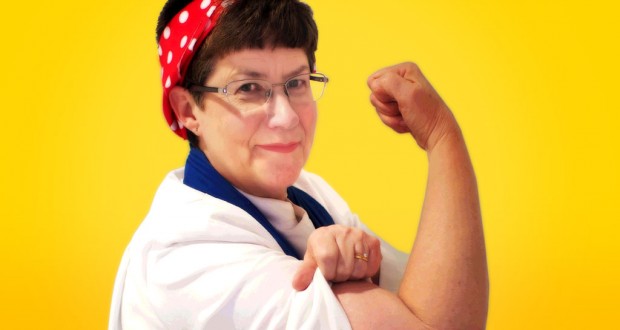 The dreaded “F” word: bra burnings and angry women are so last century yet the stigma around feminism remains. Ashley Thompson speaks with four Christian women reclaiming feminist values for ministry and mission.

Simply put, feminism is a stand for the political, economic and social equality of the sexes. It is the belief that men and women should have equal rights and opportunities. So why are so many women—and men—reluctant to ascribe to the label?

On this journey of discovery, we asked four women of faith “Do you identify with feminism?”

Rachel Held Evans, author of New York Times best-seller A Year of Biblical Womanhood, writes “I am an accidental feminist, for my liberation did not come from Simone de Beauvoir or Betty Friedan, but from Mary and Martha, Junia and Priscilla, Phoebe and Tabitha. It came from the marvellous and radical recognition that if the gospel is good news for them, then maybe it is good news for me too.”

“I don’t like that question!” responds Australia’s first female Samoan minister, Rev Faye Talatonu, “If I say I’m not a feminist, I’d probably offend a lot of females and if I am … look, I am in a sense but it was a struggle for me to even think about ordination because in my culture women are not accepted [in that role].”

The Queensland Synod’s first female moderator, Rev Kaye Ronalds reflects, “I am a feminist if it means inviting everyone to bring their gifts to the table and seeking to get the best people with the right qualifications and attitude to fill roles—and have them fairly compensated for their contribution.”

These are the beautifully diverse thoughts of four women working through what it means to be both a follower of Jesus and a feminist. They, like many women today, walk through a cultural minefield of trying to own gender equality while avoiding falling victim to popular misconceptions about the feminist movement.

According to gender scholars Charlotte Krolokke and Anne Scott Sorensen, the modern western feminist movements can be divided into three “waves”: first, second and third.

The misunderstandings and stereotypes perpetuated in recent decades are largely due to one particularly loud wave of feminism: that is “second wave” or “liberal feminism”.

In 1970s Australia, this was characterised by academic and journalist Germaine Greer’s first book, The Female Eunuch which declared women in the “traditional” suburban, consumerist, nuclear family to be repressed and controlled by men. Greer’s book, while an important text in the feminist movement, alienated women who were offended by or disagreed with her thesis.

“I didn’t see myself as a Germaine Greer—wanting to go out and ‘take ‘em on’. Mine was a much more subtle approach,” says Norma Spear of her trailblazing life in ministry.

“It was survival in the area I wanted to belong. If I had gone in confrontationally I would not have survived.”

Today many women continue to reject the feminist label as contemporary culture fails to distinguish between the true meaning and the characteristics associated with famous feminists like Greer. Misconceptions that all feminists hate men, are angry and aggressive, see themselves as superior, are anti-marriage, pro-abortion and reject motherhood still linger in popular culture.

“I think we have an old boys’ club here in Queensland. It is very strong,” says Norma.

As a female candidate for ministry, Norma experienced both patronisation and sexism. One Sunday a male minister told Norma after her sermon, “I found myself saying; even a man would listen to this!”

Norma’s response was to buckle down and let her work speak for itself. “It’s very hard to criticise somebody whose ministry is producing fruit, even though you don’t agree with them.”

The resilience of this ministry pioneer has been a blessing to those she’s mentored, including Kaye Ronalds, with whom she has a close connection.

“I had the luxury of stepping through the doors flung open by older women who had to prove their ability and worthiness,” says Kaye of her experience as moderator.

“There were many worthy female candidates before me who did not get that opportunity. So I had a real sense of privilege, and awareness that I carried some of their hopes and dreams with me into my term.”

Current Uniting Church Queensland moderator, Rev David Baker reflects, “I sit around the leadership tables and my sense is that we sit around those tables as equals but from time to time I am reminded that maybe it’s not as deeply equal as it could be.”

While Australia has already experienced female political leadership at its highest level, the island of Samoa is said to have the lowest levels of female political participation in the world—according to a 2015 research paper by the National University of Samoa.

The study entitled, “Village government in Samoa: Do women participate?” noted that village church communities are led mainly by men as the “long-established mainstream churches in Samoa do not ordain women; even if their Protestant counterpart churches in other countries do so.”

Brought up in New Zealand before moving to Australia and settling into Logan Multicultural Uniting Church, Rev Faye Talatonu’s Samoan heritage has made her path to ordination a long and considered journey.

“When I was growing up women were just like young people: they were seen but not heard,” says Faye.

It wasn’t until Faye was challenged by her family and her (male) Tongan Uniting Church minister that she truly considered ministry to be a legitimate calling.

“They didn’t look at my culture, they looked at God’s call upon my life and they believed it was ordination,” she says.

“My culture is a big part of who I am but in that is God—so it wasn’t about breaking my culture, it was about being obedient to God’s call.”

“I am a follower of Jesus first and a feminist second,” writes Rachel Held Evans in a blog post titled “Confessions of an accidental feminist”. She is renowned for eloquently articulating the hearts of young Christians, both male and female.

“I always laugh a little to myself when I receive a Google alert informing me that someone on the internet has criticised me as a ‘bitter, angry woman’ intent on destroying the church with my ‘radical feminist agenda’. I don’t hate men or burn bras or crave power, I—like most feminists—simply believe that women are human and should be treated as such.”

Rachel concludes, “It isn’t feminism that inspires me to advocate gender equality in the church and in the world; it is the gospel of Jesus Christ.”