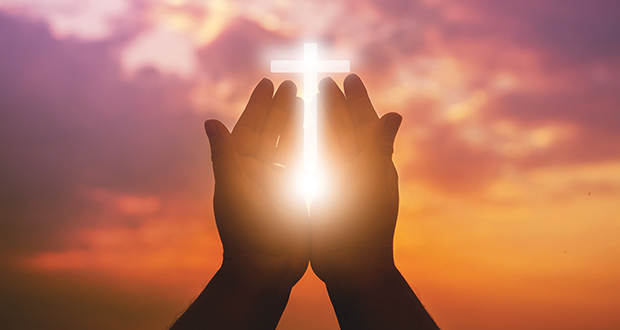 Jesus, light of the world

Rev Shane Kammermann reflects on the life-giving light of Jesus, illuminating the darkest places in a broken world and surprising and blessing us beyond comprehension.

The first words of God recorded in the biblical narrative are “Let there be light”. From those first words, creation emerges with goodness, order, purpose and life extending right down through the ages.

A history that includes the dark chapters of broken relationship with God, evil, suffering and ultimately the coming of Jesus the Messiah and a new beginning as the eternal Word and Light of God is incarnate in human history.

The Apostle Paul, reflecting on the meaning of Jesus’ death and resurrection, tells us that the same God who spoke those first words has now shines in our hearts to give the light of the knowledge of the glory of God in the face of Jesus.

Jesus may be rejected, his presence mocked or contested. His hand at work is hidden, denied or suppressed, but the risen Lord is present in all the world.

Our view of Jesus can be so small! His good news may not be experienced as good news to everyone, but his presence is good news nonetheless. Paul (Saul) on his way to persecute Christians certainly came to know this when Jesus met him on the road to Damascus.

Suddenly a light from heaven flashed around him and he fell to the ground and heard Jesus speaking to him (Acts 9).

A theophany very much like the various revelations of God to his people in the old covenant—light, and the gracious word of God!

The light shines in the darkness

With other preachers I have often focused on “Jesus, light of the world” at Christmas when we read the opening verses of John’s Gospel and sing “Hark the Herald Angels Sing” with reference to light and life.

But right there in the opening words of John, we get more than a hint that “Jesus, light of the world” is as much about Easter as it is about Christmas. In Verses 3 and 4 Jesus is directly connected with the life and light of God in creation. In Verse 5 we hear that the light shines in the darkness and the darkness did not overcome it. Though it certainly tried!

Getty and Townend’s famous hymn “In Christ Alone” expresses this conflict so well:

There in the ground his body lay,
Light of the world by darkness slain:
then bursting forth in glorious day
up from the grave he rose again!

With the coming of Jesus, a contest, conflict, and a final victory at the cross over all that is dark and evil has taken place. No wonder unjust rulers and evil spirits opposed him and still do. This victory is ready to be fully revealed at the end of this age.

The Basis of Union says that those who belong to Jesus are a pilgrim people on the way to a promised end; Jesus feeding us on the way with word and sacrament, and giving us the gift of the Holy Spirit that we may not lose the way.

I often fear losing the way. Do you? Jesus is the light and life of God shining in the darkness, and the darkness has not overcome him, even though we feel the danger of being overcome.

I had a set of driving lights on my last four-wheel drive called Night Eaters. They were so bright that they really did appear to eat darkness! Jesus is not just a quaint candle, he is a night eater! Heaven’s champion! He came to destroy the works of darkness.

I met a family two years ago through a funeral. They gathered to mourn. One brother came 20 minutes late and was full of shame. Some had not talked to each other for more than 10 years.

At that funeral many spoke openly of when the Gospel of Jesus came to their island communities in the late 1900s. Of how they stopped killing each other and began to love. They celebrate every year in July “The coming of the light”.

And at that funeral the light was still coming, and as the story was told, I witnessed brokenness and shame give way to reconciliation and forgiveness. Grown men humbled and faces lifted. Dignity restored by love. Though I led the funeral service, my Indigenous sisters and brothers were witnesses and servants of Christ to me that day and I went home rejoicing.

I recently heard first-hand the experience of a pastoral care colleague who lives in a housing commission community. She had been working diligently, trying to bring together the residents, many of whom are lonely and isolated. Sounds like a normal street.

She had been collecting 10c bottles and cashing them in to buy food for a Christmas party (budget goodies kept in a locked fridge in a common area). Not long before Christmas someone stole the lot, including about 400 bottles yet to be returned. She was so upset and full of despair. Her hope of bringing the isolated and lonely together was dashed. Or so it seemed.

But something remarkable began to happen. Residents, including some who had openly mocked her efforts, heard of the theft and were filled with indignation. They rallied around and contributed far more than had been stolen. People who never spoke to each other and hardly ventured from their houses were meeting together and planning for the party. And joy was beginning to bubble over, as the focus of the party took over. Sounds a bit like the great wedding banquet at the end of history in the Bible.

Last I heard, God had done what had seemed impossible. Evil was the servant of good! Theft was the means of a greater gift. Darkness was being overcome with light. Is this not what Jesus is doing in our life and in this world, even if we don’t perceive it?

This story has echoes of the Easter story, though Easter is far more horrific and magnificent than stolen Christmas ham and cheese restored. At the cross, evil looks to have triumphed in the death of Jesus, but in fact evil is exposed for what it really is as it plays its hand.

The power of this sacrificial love

You might recall the scene in The Lion, The Witch and the Wardrobe at the stone table as the evil creatures gloat and mock Aslan as he is willingly slain by the White Witch. Depicted there in the darkness, the light of God triumphs not by brute force, but by sacrificial love as Jesus bears the crushing guilt, shame and forsakenness of humanity.

He has been to the darkest places, even the depths of hell, and overcomes evil with the life and light of God.

There is no dark place you will ever go where Jesus is not present. Even in death! In the darkest moments, Jesus is there to save, and restore life in the brightness of the presence of God. To restore relationships and vocation. To bring hope and deep peace. And all the while, it may feel and seem like disaster is at hand.

Wherever you are this Easter, whatever dark avenue may be before you, may you be surprised and blessed beyond comprehension. And may you be led to find companions to walk with in the light and presence of Jesus, broken communities of light shining in the darkness.

May grace, mercy and peace be with you in the name of God, Father, Son and Holy Spirit.

Rev Shane Kammermann is a Minister of the Word living in Cairns. He has been the minister at North Church on the Northern Beaches of Cairns, and this year is full-time hospital chaplain to the Cairns hospitals.