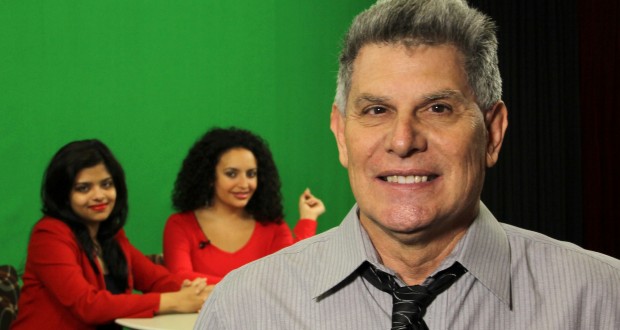 Sons and daughters of the manse grow up living and breathing the mantra of mission and service. As adults they can end up living out their own Christian witness in surprising places.

Dr John Harrison is Senior Lecturer in Journalism and Communication and Undergraduate Program Director at the University of Queensland (UQ), and has weekly segments on local Brisbane ABC and 4BC talk-back radio. He is a son of Rev Duncan Harrison, who became moderator of the Queensland Synod in 1980, and later general secretary.

A well-known commentator on communication strategy and ethics, John has worked in print, radio and television and is now engaged in teaching and researching cutting-edge communication technologies. His most recent book is Communication and New Media: Broadcast to Narrowcast.

John Harrison describes himself as an active and occasionally antagonistic member of both the Uniting Church and the trade union movement, organisations suffering a similar malaise as their power base declines.

He’s also a theological conservative mentored in the Presbyterian tradition of social activism.

“There was an enormous amount of cultural capital around the dinner table,” he recalls. “Because we were in the country, we had an almost unceasing flow of people through the manse who provided us with windows on the world. Wally Thompson was a visitor to our home in Bundaberg in the 1960s, he was an AIM patrol padre; people like Colville Crowe who had been a missionary in Timor in the 1960s … in 1968 Ian Kerr came to Bundaberg and he had been a missionary in the Church of South India, so this opened our eyes to the whole ecumenical dimension of life as well to the importance of Asia.”

John was inspired by the vision of the outback legend Rev John Flynn, and began his academic career with a BA honours thesis focused on the Indigenous communities on the Western Coast of Cape York: Aurukun, Weipa, Mornington Island and Mapoon. Later, he and his wife chose to go to the Bowen Basin; he as a teacher, she as a physiotherapist.

“We knew that there were new towns springing up and the church’s presence was limited or struggling, so Julie and I volunteered to go and we went to Moranbah which was a new school and a new community with few medical services. I had only been there for a year when the Australian Inland Mission came calling, and they said we want you to set up this new community development education program funded by the mining company, which we did for two years. I still regard myself as being one of Flynn’s mob.”

Following their return to Brisbane, John took up the role of editor of the Uniting Church newspaper Life and Times. He also did a series of broadcasts on ABC called Diary of Outback Suburbia, in which he talked about their experiences in remote communities.

Like his outback inspiration, John Harrison was passionate about the importance of communication and frustrated by the disinclination of the church to adapt to the rapidly changing social landscape.

“I spent 10 years in the Uniting Church and we tried to develop the profile of the church in ways that were quite contemporary,” says John.

John left his Uniting Church role to finish his PhD, a historical and sociological study on former Queensland premier Joh Bjelke-Petersen and the religious culture of Queensland. He began working in a variety of communications roles including the National Council of Churches and Radio National, and was appointed by Queensland University of Technology (QUT) to teach business ethics.

In 2002 he joined UQ to teach professional communication and journalism, developing research interests in new media, the scholarship of teaching, and media ethics.

He is adamant that the essentials of good journalism are even more important in the evolving media landscape.

“The old verities of journalism are still essential; what has changed radically is the practice and it has changed in two ways. The first is that the platforms have changed and the devices and so on, but the other thing that has changed is that the ‘he said she said’ model of journalism is no longer good enough. Therefore we expect journalism to be information based, not opinion based, and that is a very strong principle in our curriculum. That means that the old news values, conflict and proximity and all that sort of stuff, go out the window in favour of a paradigm that is actually quite strict about data.”

John describes the current generation of students as having a passion for social justice and engagement that was not evident in Generation X.

“Part of that is because cheap flights have allowed them to travel, and most have travelled around the world far more than I have, so they are engaged. I have students who are involved in an unbelievable number of social justice causes across the board, and I don’t just mean engaged online. Their risk is that they think you can actually destabilise an African warlord by pressing ‘like’ on Facebook.”

Engaging with this generation requires Christians to reclaim their place in the public discourse about how we should live, says John.

“That is what it is all about; it is about asking theological questions without the baggage of theological language, and you can do it. It is possible to do that. It is not about making statements; it is always about asking questions.”

John remains critical of the way in which churches, including the Uniting Church, have failed to harness the possibilities presented by new media such as Twitter.

“Religious institutions, certainly the Uniting Church, which has the oldest demographic of any of the denominations that still exist, have completely missed the boat in terms of the transition from old media to new. Why when we have theologians on Q&A, do we have George Pell; why don’t Andrew Dutney and Geoff Thompson and our other leading theologians have such a public profile? Where is the theological insight on the Q&A Twitter feed?”

The fact that data about the social media engagement of religious institutions is non-existent points to systematic failure, he says.

“What it means is that strategically, councils of the church have not prioritised new media and the argument has often been, ‘Well, most of our people aren’t on the internet’. They may be late adopters, but they are on the internet!” says John.

“The bottom line about the churches and social media is that at a congregational level and an institutional level, there is no serious attempt to deploy social media effectively. Yet phenomena like Twitter are one of the most powerful instruments we have in engaging in questions of morality and ethics.

“It is a fact that we don’t know how to use this new media; for example Twitter is two things, it is a broadcast medium but it is also an interactive medium, so if you take Twitter you have to be prepared to engage.”

John is married to Julie and has two adult children, Caitlin and James. He has written several books including Baptism of Fire, a history of the Uniting Church.
Connect with John on Twitter @thedoctorsaid