Home > Features > Ken Ham: A Queenslander with all the Answers 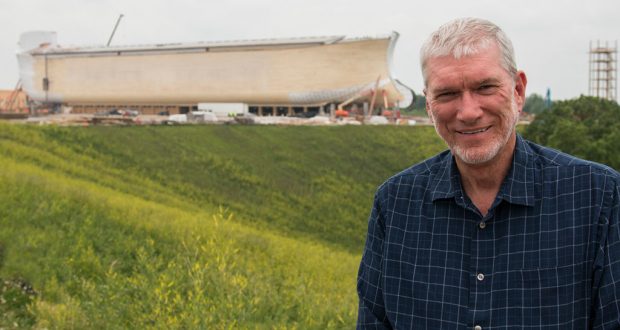 When it comes to divisive Australian Christians, they don’t get much bigger than Ken Ham. Ben Rogers interviews the Queensland creationist who is grabbing news headlines for his $100 million Noah’s ark replica.

The reactions have been a predictable mix of awe, shock, skepticism and horror. Atheist groups have used the unveiling as a rallying-point to decry creationism and its appearance in classrooms as a viable alternative to evolutionary science. Families of faith looking for a fun day out have been left inspired and impressed by the ark’s rebuttals to the doubters.

The project—years in the making and boasting a structural monolith that Ken claims is the largest timber-frame building in the world (built to the exact specifications laid out in Genesis 6:15)—is providing ammunition for both supporters and opponents, but ultimately there’s no ignoring it which is precisely what Ken wants: attention and lots of it.

There’s no doubting Ken is a polarising figure, and one which many Journey readers may question why we would bother giving him further press.

After all, to his detractors (Christian or otherwise), his fusion of questionable scientific claims with biblical text is dangerous, especially when taught in the classroom, and risks tarnishing the image of Christians who integrate evolutionary science and progressive social positions in their faith.

But there are many out there who see Ken’s hardline stance on Genesis as literal-history and intense zeal to spread the gospel as nothing short of heroic in a world of secularism and humanity’s reinterpretations of God’s word.

Regardless of where you stand on Ken, most will agree he’s a deeply fascinating figure, not to mention a very savvy businessman and promoter, and as a Christian Queenslander in the international spotlight, he opens up an important discourse Journey readers should have about science, faith, literalism and how to promote the Bible in a world where corporations, politicians and religious institutions are jostling for the short attention spans of incoming tech-savvy generations.

On the defence in the classroom

Ken grew up in a Queensland household heavily influenced by Christian apologetics, and his school teacher father would inculcate in his children an attitude of not just believing the Bible, but knowing why you believe it and “knowing how to defend it”.

Like his father, Ken also became a school teacher, and was soon confronted with a need to defend his faith in the classroom while teaching science at Dalby State high school.

Ken recalls one instance where the students flat-out told him the Bible wasn’t true because of, “what we’re taught in our textbooks about evolution, millions of years, we came from ape-like creatures, obviously the account of Adam and Eve is not true.”

“I was able to teach the students about creation, about the Book of Genesis, about evolution. It wasn’t an issue at all back then from a teaching perspective in the schools, and I taught my students what they were supposed to learn in their textbooks,” says Ken.

From Sunnybank to Kentucky

After starting a creationist ministry out of his Sunnybank home to cater to increasing demand for his origins teachings, Ken eventually moved his family to North America in 1987 to work at the Institute for Creation Research.

America, with its immense Christian population and vast sums of investment capital, was a perfect breeding ground for growing the creationist movement, and Ken founded the Answers in Genesis (AIG) ministry in the mid-nineties to spread the message.

Since then, AIG has become an empire of books, DVDs, radio broadcasts, the 75 000 square-foot Creation Museum and now the Ark Encounter theme park.

For Ken, the motivation for building the Ark Encounter is simple: “I see this as a way of publicly opening up the conversation about Christianity, of impacting millions of people. We can get people talking about the Bible, talking about the Christian faith, because our whole motive is, as Christians, we do want to see people saved and won to the Lord Jesus Christ.”

Given the sheer volume of resources—financial and otherwise—the Ark Encounter required, Ken has a response to those, including this author, who question whether such expenses are justified in a world where so many struggle with crushing poverty or economic hardship.

“Some of the secular world has said, ‘what a waste of money’ because it should have been given to the poor and needy, well, the reason they say that is out of prejudice because they don’t agree with the message,” Ken argues.

“And the reason I say that is because do they say that to Hillary Clinton who is spending $2 billion on her political campaign? That’s how much they’re raising, $2 billion! What about all these cruise ships that are being built just for entertainment? Some of those cruise ships are nearly a billion dollars to build. I mean we could talk about any facility, what about a church auditorium that costs fifty million or a hundred million? So it goes on. We could look at everything like that.”

Ken also points out that AIG supports other missions and their Vacation Bible School program partners with the Children’s Hunger Fund to, according to Ken, “supply nearly three million meals to those kids.”

Christianity and the current culture

Our conversation turns to the current state of society and how government interacts with the church on topics such as marriage and freedom of religious expression.

“From a Christian perspective when you look at what the role of state is from what God says and the Bible, it’s to maintain law and order, and what we see is the state is getting, in the whole western world, more involved in legislating morality. That’s where the state is, in a way, dictating a state church and those things do become issues. We live in this world, we’re to obey the government, but when it comes down to obeying God’s word we have to obey God’s word first obviously.

“Many of those who want gay marriage, they don’t want to be just free to believe what they want, they want to enforce that others have to believe it too, that’s what I see happening, and that’s where the problem arises, where it then takes away from the free exercise of religion and someone saying, ‘Look, I should be free to say I don’t agree with that, I believe God made Adam and Eve, he made the first marriage, Jesus quoted from that, that’s why I believe marriage is a man and a woman.’”

Finally, for the non-creationist Christians Ken stresses that “salvation is conditioned upon faith in Christ, not what you believe about the age of the earth or the days of creation” but offers a challenge for them to reflect on.

“I do take a strong stand on taking Genesis as literal history, but that doesn’t mean that we’re saying, ‘If you don’t believe what we believe, you can’t be a Christian’. We have never said that.

Read more at The Scoop. Our online-exclusive expanded interview with Ken explores his past, the stories behind the Ark Encounter and his experiences with atheist comedian Bill Maher. 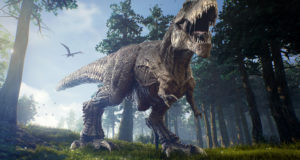 Walking (and reading) with Dinosaurs