Home > Features > Ring in the changes 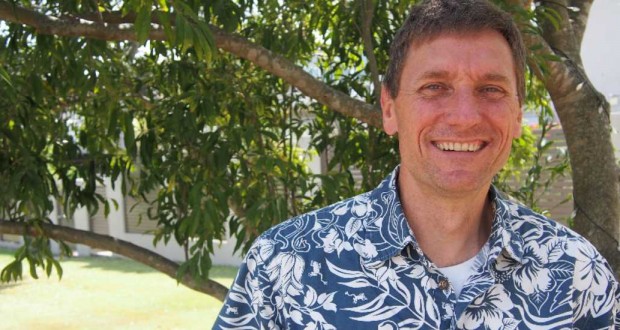 Ring in the changes

After a career in media Phil Smith has found himself lay pastor to a kind of faith community not often found in the Uniting Church. Rohan Salmond talks to him about faith, ecumenism and the future of church.

“I have just turned 53 and really would not have expected to be in this activity in this season of my life,” says Phil Smith.

Phil is a part-time campus minister at Unity College, a combined Catholic-Uniting school in Caloundra on the Sunshine Coast. He is also community pastor of BELLS faith community which, although only one year old, received considerable attention at the 31st Queensland Synod meeting in October for being an alternative form of church and a potential model for the future of ministry.

Before undertaking his current lay ministry positions, Phil spent most of his life in communications roles, first with the Royal Australian Air Force and most recently ABC radio, where he worked as an announcer on 612 ABC Brisbane. He is also a highly sought after speaker and MC.

Lay ministry seems like quite a departure from his previous work in communications, but Phil sees a common thread.

“For me, I’m a story teller. That has always been a gift of mine. Whether I use that in radio terms or in television terms or in information terms or in preaching, there is something in that which seems to be a gift that God can use in different circumstances,” he says.

Phil grew up a “PK” (pastor’s kid) and at 16 was one of the last people to be confirmed in the Methodist Church in 1977.

“I look back on that period in the 70s—my high school years. There was the charismatic revival under way, there was a lot of powerful stuff going on in Queensland. A lot of cheese cloth, a lot of long hair, the Jesus bus,” he laughs.

“It’s funny, I look back on it now and there are a number of people who came to faith at that point who are still on the journey in different places and different ways but are still believers and we still stay connected.”

Phil met his wife Kayleen through the Uniting Church. Kayleen boarded with Phil’s parents in Townsville when she moved there to attend dental college, while Phil wound up worshiping with Kayleen’s parents at North Rockhampton Uniting Church while he completed his arts degree. “But it was a lot of years later that we decided we were in love,” he says. They’re now grandparents and have been married for 29 years.

“The Uniting Church and its ethos has in one sense been formative and important to me,” says Phil, “but my life journey has been such that I have always felt fellowship and belonging in a much broader sense in the body of Christ; I have never been particularly brand conscious.”

Phil’s ambivalence about denominational identities gives him a lot in common with Generation Y, members of which—data from Barna Group and National Church Life Survey suggests—do not strongly identify with a particular denominational tradition within Christianity.

“I think if we are honest, there is an aspect of denominationalism that is just ego-based; we make certain choices and stand by them. On the other hand we are born into some of this stuff and it is just part of who we are, it’s just a cultural thing.”

Even so, his work as part-time campus minister at an ecumenical school like Unity College has been illuminating and at times, challenging.

“There have been a lot of good things in that but equally there are challenges in an ecumenical school such as ours,” he says.

“Working cheek-by-jowl with Roman Catholics, I probably had a whole bunch of Protestant preconceptions, stereotypes when I started. Some of them have been confirmed, others have been incredibly challenged.”

It’s not your grandma’s church

Working at Unity College in Bellvista opened a lot of opportunities for Phil and influenced the founding of BELLS, a faith community in Bells Reach, a new Stocklands housing estate in Caloundra South. In addition to referencing its location, BELLS stands for: belong, eat, listen, learn, serve.

“There were people at Caloundra Uniting Church, which is our mother ship, who said ‘What do we do when 50 000 people move to this part of the Sunshine Coast in the next 15 years? We are never going to have another million for another building!’

“Rev Dr Rob Bos, who is currently in central Australia, has been thinking and exploring the idea of fresh expressions of church that don’t have buildings and what that would look like in the 21st century.

“Other pastors and ministers from around the Caloundra area said, ‘We think it’s the Uniting Church [who should start this community], and Phil you have already got this connection with the neighbourhood, is it you?’

“I was studying with Adelaide College of Divinity about chaplaincy in the neighbourhood, incarnational ministry and all these things. The pieces really came together. Kayleen and I happened to be the two people in the right place at the right time, so I said yes, look this is exciting we need to pick it up and run with it.”

Phil says that although the Uniting Church could be a natural home for more church communities of this type, there are some attitudes that need to change.

“Sadly I have had people come and tell me, ‘I have seen this fail before, it’s not going to work’ ” he says, “but I sensed something happening at Synod this year that indicates a large part of us is now ready for something like this.

“If we go back to our roots and the basic documents, the Uniting Church says we want to be engaged with other people, we want to do things ecumenically and we want to do it at a local level. Those things matter a lot.

“But the challenges are, how do you do things without a building and on a shoestring? And how do we train people for this kind of thing that isn’t the same as what we thought people’s ministry experience would look like?”

Something exciting is happening

The demographic changes affecting churches mean the future is uncertain, and a more adaptable, pan-denominational idea about what makes a church is necessary in order to grow.

“We had a table full of young people last Sunday [at our dinner meeting] and I looked at that group and thought, ‘I don’t think we can run a youth group for them. What would that even look like for us?’ But I had breakfast with the Salvation Army guy and asked if he would mind us sending them along. It’s just next door at Sugarbag Road, so cooperating makes sense.

“Last night I was down in the community garden and half the people there had actually had contact with BELLS. We could be there digging veggies together on Sunday afternoon—would that be church? I don’t know what we would call it but I think we have to explore this stuff.”

Ultimately Phil is optimistic about the future of the Uniting Church.

“We’ve got a lot of smart people with all kinds of skills at the moment. That’s a part of my sense that there is something new and exciting is happening in the Uniting Church in Queensland.

“The next couple of years are going to be really important.”

As part of their 1.2.3.4 campaign BELLS is asking Uniting Church members to empty their change jars and invest in the mission of their fledgling community. Find more information at bells.org.au