Home > Features > Tear away the tinsel 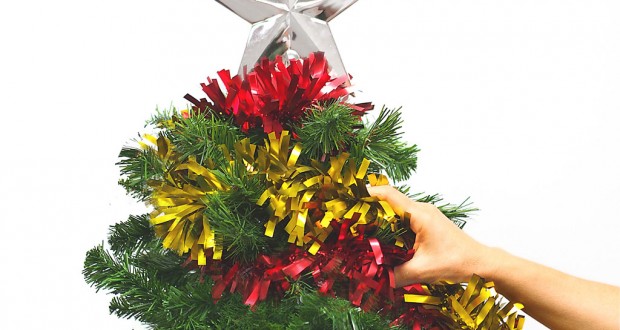 Tear away the tinsel

Christmas marks the time God physically became part of the human story. What does it actually mean to live out the spirit of Christmas? Rohan Salmond explores.

Gleaming light softly illuminates a huddle of people gathered around a sleeping baby as he lies nestled in a small box of yellow straw. Three bearded men in crowns and turbans and a young shepherd gaze upon the infant along with a small assortment of barn animals. The child’s mother, head bowed, has an expression on her face a bit like Mona Lisa. Her fiancé stands behind her with a hand on her shoulder. Some angels in white robes fly overhead. The whole idyllic scene is made of plastic and sits in your local shopping centre. The place is packed. JB Hi-Fi is having a sale.

Among the saccharine sentiments and stress of the holiday time it can be difficult to focus on what Christ’s birth really means. We have told and retold the story for nearly 2000 years, smoothing out the wrinkles and overlooking any unpleasantness, but rediscovering the radical truth requires us to peel away the glittery decorations.

“I think we need to strip the tinsel from the Christmas tree and see the raw guts of the story,” says Rev Susan Pickering, minister with West End Uniting Church.

“I don’t think it’s named: We have a teenage girl, unmarried, giving birth. The stigma that’s still attached to that, it’s all there—it wouldn’t have all been sweetness and light.”

Christmas is the time we celebrate the birth of Jesus—God become flesh. Far from the plastic nativity scene, it’s messy, surprising and full of life.

The idea that God, who is perfect and all-powerful, would become a human and get involved with the world from a position of weakness is moving and shocking for Rev Dr Malcolm Coombes, assistant director and lecturer in New Testament at Trinity College Queensland.

“The exciting thing about Christmas is the fact that we honour a God who is so willing to be engaged with humanity,” he says.

“Unlike most other religions we have a God who is able to be a human being in every sense of that word. So being vulnerable enough to sit with us, to be with us, to share with us, to undergo the joys and hassles that we endure in our lives, and finally being so vulnerable to be open to the instigation of violence.

“It’s so topical these days in our violent world that Christ would come and be exposed to that violence that we show towards each other. I think it’s just a great display of love in human form.”

That a God so powerful would become so vulnerable and subject himself to his own creation is a mind-bending idea. The radical vulnerability of the Christ child continued to characterise Jesus throughout his life, and was ultimately borne out in his death. Christmas and Easter are intimately connected, says Susan.

“Ultimately, if you have the Incarnation without the Easter event then it really does just become the hype that is mince pies and Christmas trees.

“God in the flesh, if we really do look at it, is a vulnerable child who needs its mother to care for it. So we’ve got the vulnerable God who’s come to change the way of the world. That’s how I see the Incarnation.”

In the gospel of Luke, when Mary is pregnant with Jesus she travels to see her cousin Elizabeth. When they meet, Mary sings the Magnificat, now one of the most famous and widely-used hymns throughout Christendom. She talks about the mighty being humbled and the lowly being lifted up. It’s a promise of drastic, surprising change to the way the world works.

“Think about Luke 4, ‘I came to give sight to the blind and set the captives free,’ and in Matthew 25, ‘When I was hungry you fed me’. This is what was born. This was the beginning of it.”

Malcolm says Jesus is the personification of the kingdom of God, and that Jesus demonstrates what is possible for humanity.

“I see in the person of Jesus what the reign of God is meant to be like—what kingdom life is meant to be like. What is God’s will for humanity? How does God want us to live together? God doesn’t give us a list of do’s and don’ts; we actually see what God wants for our world in the way that Jesus has acted and spoken and shared.”

Malcolm particularly likes how the gospel of John talks about the coming of Jesus.

“It’s the Word becoming flesh,” he says, “[Jesus is] what God wants to communicate to us about his love … God’s desire for humanity is being expressed in this person Jesus as something that can be seen and felt and touched and smelled and listened to and obeyed and followed and all of that.

“It’s not the cute manger story, but still behind it is this presence of this Word of God, this plan of God for our world. So even in all the Christmas paraphernalia that happens, I try to see through that to the underlying message of God becoming a human.”

As we tear away the tinsel, we do the same to the protective layers that shield us from pain, disappointment and the suffering of others—following Jesus’ new way of life is no small task. But as God has become vulnerable for us, so we need to be vulnerable for others.

“It seems to me that the presence of Jesus in this world was representing the very presence of God among us,” says Malcolm. “It’s drawing us constantly to something that is totally exciting, totally loving, totally caring, and totally a great model for what our behaviour is to be towards each other as well.

“I think incarnational ministry for me comes down to being present; to follow the way is to actually be mindful of how we’re being present and standing against injustice. When we say, ‘My identity is in Christ’, we need to think about well what does that mean? To be Christ to others is to meet them where they’re at.”

Malcolm says, “Our care for each other and love for the world is meant to be an expression of Christ’s love. We love because God first loved us, and we see that love in Jesus Christ coming in human form and expressing God’s love for us in very human ways.

“We are encouraged to share that same love with the whole world. Not just to those who love us back, but for those who don’t. We need to be able to respond in love to all sorts of actions done against us.”