Home > Features > Wellsprings of hope in a scorched land 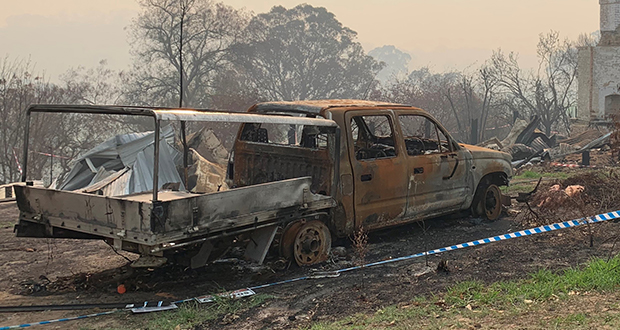 Wellsprings of hope in a scorched land

This report is adapted from Uniting Church in Australia Assembly media sources with additional information by Journey writers in the Queensland Synod.

Heartbreaking images and stories of the unfolding bushfire crisis were the backdrop to late spring and summer across Australia. Many of the affected communities and properties in Western Australia, the southern states and Tasmania, and up to New South Wales and Queensland were already suffering the grip of a long and debilitating drought.

As the first distressing visions filled our screens, so too did the stories of kindness and courage. Firefighters, emergency personnel, community volunteers, neighbours and strangers stepped up to help.

And alongside them, sitting quietly with anxious evacuees, supporting exhausted workers and working with local congregations to provide practical care were the Uniting Church coordinated chaplains, the church agency crisis responders and local church members.

Chaplains on the front line

Chaplains are almost always on the heels of emergency response teams when a disaster occurs, and the bushfire crisis was no different. In fact, Uniting Church National Disaster Recovery Officer Rev Dr Stephen Robinson estimates that the emergency response across the country constituted the largest scale disaster chaplaincy response on record in Australia.

Stephen worked around the clock to coordinate the ecumenical and multi-faith chaplaincy into evacuation and recovery centres and disaster assistance points in NSW. He then travelled to affected areas to run information, strategy and support workshops with church leaders as they began to move forward to support their communities.

“It’s been beyond anything we’ve ever done before. Just since the beginning of this year for instance, there’ve been 36 assistance areas, whether they’re evacuation centres or recovery centres or community meeting points—that’s in the last 11 days. Sixty-three chaplains involved and as of last night 1677 hours of chaplaincy face-to-face, which is just mind-boggling considering that’s less than two weeks.”

Stephen’s role over the last decade has included equipping chaplains to work in disaster relief and to support local ministry agents coping with crisis. The result is a planned and integrated system which was ready to swing into action.

“The idea is to train people who are already capable pastoral carers … and we add to that a couple of intensive days training and then put a framework around, an organisation which enables them to be integrated in the government response so that they work as partners alongside Red Cross and Salvation Army and other groups.”

He also coordinates the NSW/ACT Peer Support Team and trains in other Synods for this work.

“The local clergy are disaster-affected themselves. And many of them have been evacuated and have had an impact on their homes or families or their parishioners. So the idea is to simply come beside and add support for them and add capacity to their ability to work. And then as it moves into the recovery phase to give them what they might need for the future.”

As communities moved into the next phase, chaplains began working through recovery centres in places like Cobargo, the small town that was engulfed in a massive blaze that claimed the lives of father and son, Robert and Patrick Salway, and Quaama in New South Wales.

In South Australia two new ministry placements were established to support recovering communities, one in the Adelaide Hills and the other on Kangaroo Island, both funded by the Uniting Church in Australia South Australia Relief Fund.

Frontier Services has launched an appeal to support the East Gippsland community in Victoria, where 4000 people were trapped in Mallacoota on New Year’s Eve. Money raised will go towards providing an additional bush chaplain in the region to assist with trauma counselling.

In consultation with the Moderator of NSW/ACT, Stephen is hoping to put in a number of long-term part-time chaplaincy positions down the coast concentrating purely on recovery.

“The local ministers are already tired, they’re disaster-affected and they are going to be feeling the weight of that recovery,” says Stephen.

“And this is not just with the Uniting Church, the conversation we’re having now is with other denominations, and they all agree the sense in having a joint approach and being able to jointly fund and operate this in concert with all the churches of those areas.”

Congregations do their part

Uniting Church congregations across Australia were quick to act during the bushfire crisis.

One of the many acts of generosity came from Aspley Uniting Church in Brisbane who in early January donated $2000 to Eurobodalla Uniting Church to provide immediate assistance through supermarket vouchers.

Batemans Bay Uniting Church on the NSW South Coast provided shelter when other evacuation points were full or could not be accessed. Retired minister Rev Yvonne Stevenson said 100 people came through the doors and 40 slept the night inside the church.

“We have soft pews, so we were able to turn them around and make a double bed out of them.”

Families with special needs were accommodated inside the church’s squash courts, including a family with a child with autism. Another family came with a child on a hospital bed needing aspiration every hour. Space was found for them and the medical equipment was recharged at the local hospital.

In Queensland, UnitingCare Community provided immediate and ongoing support through the Lifeline Community Recovery team. The team is activated in the wake of a crisis or natural disaster at the request of state or local government authorities or local community leaders.

The specialist workers provide “psychological first-aid” or “counselling” to support people who have been overwhelmed and put them in touch with the appropriate services.

“Stanthorpe started the ball rolling in early September and we were soon to receive a call for support from Blue Care. This was responded to by the Department of Communities, Lifeline Community Recovery and Red Cross attending the Blue Care centre in Stanthorpe to help those affected, with Blue Care workers (some of which had been affected by the fires) bringing their clients in to see the recovery workers and then returning them home.”

The UnitingCare Disaster Appeal funded the Connection and Care program in Stanthorpe, which enabled Lifeline Community Recovery worker Ruth Adamovics to spend two days a week there for about five weeks.
Ruth worked closely with Rev Kaye Ronalds and the Stanthorpe Uniting Church.

“The Uniting Church was so supportive. Kaye helped connect me with the schools, she was very informed on who the chaplains were and gave me a list of chaplain’s names and principal’s names if they didn’t have chaplains. I would pick up groceries from the local supermarket and drop them off to the Uniting Church and Kaye arranged for a group of ladies in the church to make up lunch packs,” says Ruth.

The initiative began with three schools and grew to 13 as Ruth began visiting schools with the Lifeline Goody Bags filled with food.

“Sometimes if there was a family they might put in a week’s worth. I know one of the main schools in Stanthorpe which Kaye has a bit to do with, they have a breakfast club so they would use those lunch packs for those and also they had children who would come to school without lunch.”

As Ruth walked around the town she began chatting with the locals in shops and businesses like the laundromat.
“Lifeline had purchased some cafe vouchers so when I was chatting with people in town including those waiting for their laundry, if they were very low or tired, I could just give them a voucher to go and sit in a cafe and have a drink and a cake. People felt like you’d given them the world!

“I did find a few businesses that were struggling so I informed Kaye, and she acted on that immediately and arranged to deliver hampers, because it was getting near Christmas, and gift cards, which was wonderful. At times she would let me know of a particular need, someone who may be struggling, and so I dropped in to offer emotional support and some practical support as well.”

UnitingCare Queensland was at work after the fires on the Sunshine Coast, again with the support of the local Uniting Church.

“We had great support from Leonie Gaffel after the fires in the Tewantin/Noosaville area,” says Clarice. “Leonie helped to link us in with services, organisations, and other churches and people that enabled Lifeline Community Recovery to provide food parcels to people in need in the area.

“Then in Esk we were able to use the Uniting Church hall as a base and to see people impacted by the fires in this region for four days a week from the end of November until Christmas Eve.”

The power of listening

For recovery worker Jennifer Hill, her time at Esk and Jimna reinforced the importance of the role.

“I spent a large amount of time with people who have suffered drought, fire, evacuation and isolation. They spoke of feelings such as being unable to provide for families, keep business going, watching livelihood disappear and being helpless watching stock die and crops fail due to lack of water and feed,” she says.

“I had repeat visits from many and was astounded to learn how they valued ‘just’ being heard and how this helped their emotional state. Some also stated that they thought Lifeline was about selling clothes or supporting people with suicidal ideation and not for people like them. All were so grateful for Lifeline being there in their time of hardship.

“I truly now understand the power and strength of being there and hearing someone’s story.”