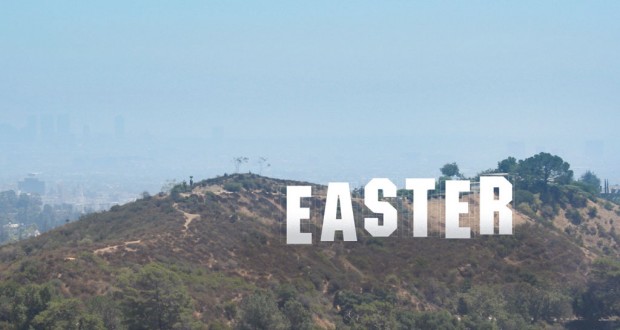 Blatantly biblical or subtly current—Easter themes of sacrificial love, redemption and resurrection are being told and retold in modern cinema. Ashley Thompson explores.

Undertones, analogies and parables—not all Biblical retellings of the Easter story are as obvious as The Passion of the Christ (2004) or The Lion, the Witch and the Wardrobe (2005).

In fact, if evangelism is the goal, producers of the ten-hour miniseries The Bible (2013), evangelical box office hit Son of God (2014) and recent release Risen (2016) may be shooting themselves in the foot.

“Two years ago faith-based production company, Provident Films released Saving Christmas (2014), a film about the real meaning of Christmas—which is that it’s not about money. This is what the whole film was about and yet it’s a blockbuster evangelical film … that’s making millions of dollars at the box office.

“It’s very tricky—how do Christians retell these stories and reach an audience without participating in and through mechanisms of power and money?”

Crucially, how do they manage to convey Christian imagery or ideas without alienating non-Christian viewers?

Film enthusiast and lay education officer for the Anglican Church’s St Francis Theological College, Jonathan Sargeant admits that he is “much more interested” in Easter retellings that head into metaphor, analogy and what he likes to call “echoes”.

“The first is Superman Returns (2006) and the second Spider-Man 2 (2004) which—it really surprises me—not a lot of people talk about.”

Jonathan recounts scenes from both films that echo Easter story themes of sacrifice, redemption and resurrection, drawing particular attention to crucifix poses made by both Superman and Spider-Man in the act of sacrifice.

“One of the reasons people didn’t like Superman Returns—and generally speaking it is not remembered well—is because of the Christian symbolism. For me personally however, that’s actually one of the reasons I really like it,” he says.

While citing the draw of the analogies present in Star Wars (1977–2019), The Matrix (1999–2003) and even Alien 3 (1993) Jonathan says what stands out in Spider-Man 2 is how the witnesses of Spider-Man’s sacrifice become “inspired to carry on his mission”—a metaphor for the Great Commission often not seen in direct parallel to an echo of the Easter story.

Dr Janice McRandal however, finds issue with retellings of “this pure white salvific figure” as it “continues to participate in an order that Jesus actually rebukes.”

“Jesus dies because he will not participate,” argues Janice.

She believes heroic retellings “nearly always of a man who lays down his life” are problematic as they “lead to the celebration of acts of heroism that are themselves embedded in acts of violence and patriarchy.”

“The Easter story isn’t some violent uprising,” she explains. “It’s a resistance to participate in the production and power of evil in the world.”

Janice’s two favourite Easter-inspired films, Snowpiercer (2014) and Mad Max: Fury Road (2015), subvert the ubiquitous “masculine, heroic, salvific figure” to bring the viewer a “more nuanced reading of life’s situations that is not always black and white”—something she is aware does not sit comfortably with “conservative evangelical Americans”.

These films carry out “not necessarily the theme of death and resurrection explicitly but themes of liberation”.

“I believe this is what the gospel and the Easter story are about: liberating the current world order from the oppression of the systems of power. I think the most powerful retelling of this kind of liberative message is when filmmakers refuse to participate in that.”

So who is the audience for biblical retellings of the Easter story?

“Whether you’re satisfied with straight Biblical depictions in film depends on the same issues that plague every movie that tries to adapt a text—you read it in a certain way and the film doesn’t match up to how you imagined it,” says Jonathan Sargeant.

According to Jonathan, a Hollywood filmmaker’s fascination with retelling the Easter story is an artistic expression of “wrestling with who they are and what gives them meaning”.

“I think there is a formula for making conservative evangelical Christians happy,” she says, acknowledging their box office pull, “and that formula is based on having very clear boundaries on good and bad.

“So I think these more nuanced movies that show you that life is complicated and characters are complicated—and good and bad isn’t always clear—are far more realistic retellings of the message of Jesus.”

Janice believes that superhero and “chosen one” stories such as Harry Potter (2010–2011), Star Wars and The Matrix, while rich with sacrificial symbolism, “trade off a really imperialistic notion of victory”.

“That exact thing that we see in all these movies is the one thing that Jesus wouldn’t do because it wouldn’t liberate creation,” she says.

“It’s so unsatisfying and we don’t know how to tell this story.”

Jonathan runs workshops at the Anglican St Francis Theological College to help people recognise God moments and scriptural themes that are present in their everyday lives.

“I look to an ideal world where people of faith can not only enjoy films but also see the way in which they can share parts of their Christian story with others,” he says.

Janice reiterates that while the Easter story themes “aren’t unique or the exclusive purview of a Christian story”, the radical edge of the gospel is a liberation of mankind that brings about a new world order, for everybody. And that is certainly worth sharing.