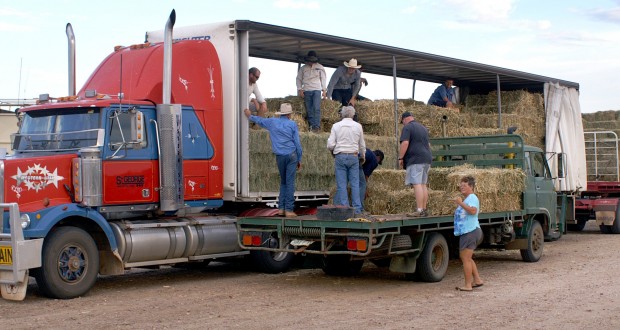 Transfer of the hay begins from the road train to local farm vehicles in Longreach. Photo: Jenny and Peter Coombes

Confirmed by the ABC as Queensland’s most widespread drought on record, Frontier Services and members of two churches have independently taken action to alleviate the enormous cost of providing hay to Queensland’s starving livestock.

“In six to eight weeks you can really get through about $150 000 of hay feed. It’s definitely high risk,” says cattle farmer and Longreach Uniting Church member, Rosemary Champion.

Mrs Champion and her husband Warwick have received just 62 millilitres of rain in the last 11 months, the lowest rainfall on their family’s 100-year-old property.

“The people of Murgon thought, ‘Well if Jenny’s going out to Longreach maybe we can busy around and get some hay’, so they did a magnificent job raising enough money to buy 1100 bales of hay, massive loads of groceries and even some home-baked goods.”

“We thought this was a good way for us to be the hands and feet of Christ on the ground,” says Mr Ryan, “because faith without action is a pretty empty thing.”

Although not a traditional part of their role, Frontier Services is open to the immediate needs of regional Queenslanders. A vast cohort of their own employees are also currently subject to the effects of the drought.

“It’s also about raising greater awareness about remote issues to a largely urbanised Australian population who sometimes fail to appreciate that our vast interior is the country’s bread basket,” says Mr Ryan.

Both Mr Ryan and Mrs Champion agree that two-way communication is necessary for any aid to succeed.

“I think the worst thing that can happen in a drought is that people shut down and they don’t want to see anybody. The minute that communication with your service provider shuts down, you are looking down a slippery slope,” says Mrs Champion.

For more information or to donate to Buy a Bale, visit buyabale.com.au