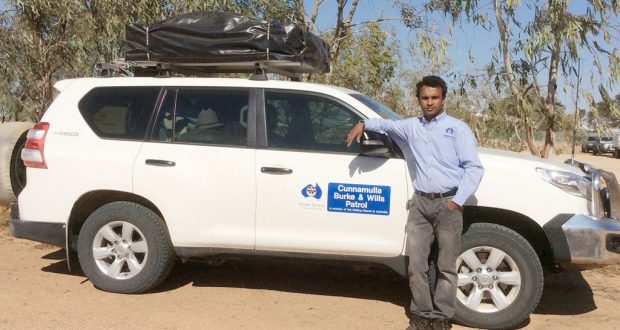 A church partnership between the Cunnamulla and Karana Downs Uniting Churches has resulted in a much-needed building upgrade. Journey reports.

This restumping project is the result of a spontaneous association between the two churches which began back in September 2014 when Karana Downs Uniting Church member Russell Dwyer met patrol minister Sunil while in Cunnamulla on business.

“Their conversation began a friendship that has united two congregations and brought the city and outback closer together,” recounts Megan Walters, another Karana Downs congregation member.

“Since that September day in 2014, working parties from Karana Downs Uniting Church have helped repair the Cunnamulla church and hall, donations of winter woollies have rolled their way westward and now, the extravaganza that is Music on the Hillside!”

First held in November 2015, the Music on the Hillside benefit concert attracted 150 people and raised over $4000.

“This money will be used to fund a number of projects including restumping the Cunnamulla church, whose sixteen perimetres concrete posts were split, cracked and rapidly crumbling.”

Based in Cunnamulla, the Cunnamulla Patrol covers an immense area extending 230 km north to Wyandra, 180 km east to Bollon, 570 km west to Innamincka on the South Australian border and 630 km south-west to Cameron’s Corner.

Rev Sunil Kadaparambil has always had a passion for mission. “From my childhood onwards I had a dream to become a missionary, and at age 15 I joined the seminary for priesthood training.”

After working as a Catholic priest for nine years in India and almost three years in Australia, Sunil joined the Uniting Church so he could work with people in remote Australia.

“I enjoy each and every moment of my ministry in this beautiful part of the country and I love that the people welcome me as part of their family.”

After the success of the 2015 Music on the Hillside concert, Karana Downs congregation members will continue to support Sunil and the Cunnamulla Patrol ministry with planning already underway for another concert on 6 November 2016.

Project chair Ray Crompton extends warm thanks to all the congregation members involved and is proud of how this community of faith has pulled together to support patrol ministry.

“It is indeed our privilege that we as a congregation can support this work,” says Ray.

The next Music on the Hillside will be on 6 November 2016. For more information or early bookings email Ray Crompton at rbcrompton@bigpond.com