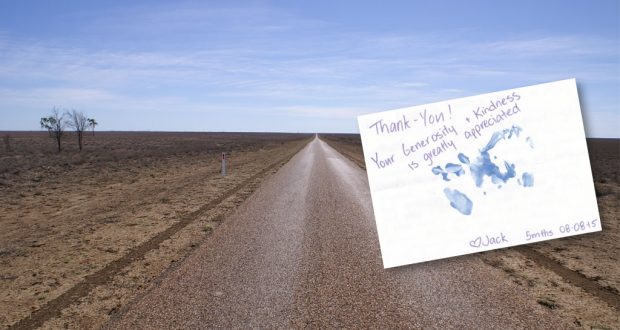 Hope was on the horizon when winter rains brought smiles back to the faces of western Queenslanders. Ashley Thompson checks in with Longreach Uniting Church minister Rev Jenny Coombes.

Although 80 per cent of Queensland remains drought declared, the Longreach community has had their spirits lifted by the wettest winter on record.

“Since the rain has come, morale has lifted enormously,” says Rev Jenny Coombes. “The graziers know they have a long road ahead but there’s just that feeling that this is the beginning of the end of the drought.”

In the two and a half years Jenny has been placed in Longreach, her congregation has helped distribute over $200 000 to struggling farmers primarily through gift cards.

“The big thing that comes through from all our farmers is the sense that they know that others in Australia are thinking about them and that they are not alone,” she says.

Overwhelmed with support from churches of all denominations along the east coast of Australia, Jenny has been a grateful intermediary of cash donations, prayers and notes of encouragement.

While there is good intention behind the donation of physical goods such as hay bales, she says that at times these gifts have caused more harm than good where weeds and mould are found—and also feeds into the misconception that “the only people that are being affected by the drought are the people on the land.”

“It affects the whole community so whatever people do it needs to be based on helping everyone,” she says speaking of the businesses, community groups and jobs affected. “It’s a real domino effect.”

Moreover, visiting Longreach and supporting its tourism may be one of the most valuable gifts non-locals can give as it’s one of the industries currently keeping rural Queensland afloat.

“The outback itself is amazing: the size of it, the openness, the vastness … people in the city don’t realise how many stars there are and just how big the sky is,” says Jenny.

On the recipient end, Longreach congregation has received numerous thank you cards and letters from farming families eager to thank those who have donated.

“Congratulations on the wonderful work you are doing to help individuals and businesses during the drought,” wrote in one recipient. “Please pass on our gratitude to the donors and fundraisers!” penned another.

The one that stands out to Jenny most was a card accompanied by a couple’s five-month-old son’s hand print which read “I got the [gift] card on my birthday and it just put a smile on my face”.

“And then I walked around the house the whole day with a smile on my face,” says Jenny.

How does your church connect congregation and community? Email journey@ucaqld.com.au
Donate to drought-affected graziers on wqda.org.au or email Jenny at longreachuca@gmail.com