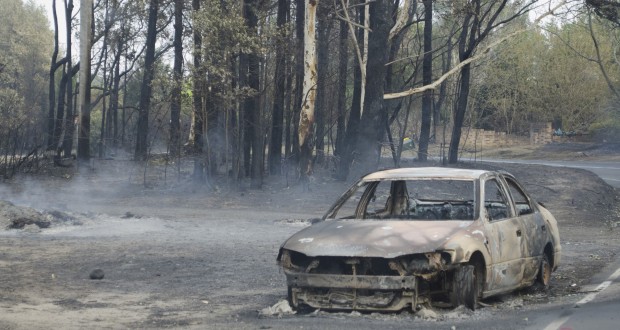 President of the Uniting Church in Australia Rev Dr Andrew Dutney has launched a national appeal to support those facing loss and hardship from the recent bushfires in New South Wales.

“The fires have destroyed or damaged hundreds of homes in the Blue Mountains,” said Dr Dutney. “We ask Uniting Church members across the country to pray together and to offer their support for all the people affected.”

The October fires were the worst that the region had experienced for at least 45 years and a state of emergency was declared across New South Wales. There are ten Uniting Church congregations and faith communities in the Blue Mountains area, and several congregation members lost their homes.

National Disaster Recovery Officer Rev Dr Stephen Robinson has coordinated the New South Wales Disaster Recovery Chaplaincy Network (DRCN) since its formation in 2009. The network is trained, resourced and coordinated by the Uniting Church, and its chaplaincy teams were working in all major evacuation centres as soon as the emergency began.

Dr Robinson worked around the clock to ensure that chaplains from a variety of denominations and faiths were available at evacuation and recovery centres.

“Teams of chaplains from a wide range of denominations have been active in five communities, some on a 24-hour basis,” he said.

He described the fires as “the most serious I’ve experienced in 17 years of involvement in bushfire response” and said that resources would be stretched to the limit to support local communities.

Dr Robinson and Dr Dutney are encouraging people who would like to assist to make a donation through the National Disaster Relief Fund.

“Donating money is much better rather than donating goods,” said Dr Robinson. “It makes it easier for workers to meet needs on the ground quickly and efficiently.”

Donations of $2 or more to the National Disaster Relief Fund are tax deductible. A variety of donation options including a secure online donation facility are available via the Assembly website at assembly.uca.org.au/bushfires