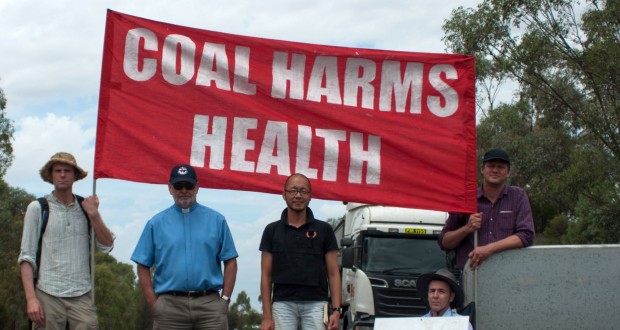 Anti-coal activists at the controversial open-cut coal mine at Maules Creek, near Narrabri, New South Wales are at times surprised to find themselves accompanied by a Uniting Church Minister. Rev John Brentnall joined a blockade for the third time on 26 November, together with three Buddhists and another Christian, this time at the gate of a coal processing plant in Gunnedah. On a previous occasion he was arrested.

Why would a Christian Minister work in such unlikely ways? John explains, “Like many other Christians, I interpret the word ‘neighbour’ to include not just the people who live next door but all of humanity. Not just the ones who are alive now, but the ones in the generations to follow. I also include all living creatures.”

John cites the various objectionable impacts of the coal mine. He is concerned about the health impacts of toxic dust; the mine’s heavy use of water in a drought-prone agricultural area; the destruction of the last remaining intact  Box Gum grassy woodland, habitat for dozens of endangered species; and the destruction of various sacred sites of Gomeroi Traditional Custodians.

John’s second principle area of concern is the global environment. “I am against the development of any new coal mines because the burning fossil fuels leads to global warming and sea level rise. Between 60–80 per cent of coal, oil and gas reserves need to stay in the ground if the world is to have a chance of staying under 2 degrees Celsius warming.

“Underlying all of the above is my Christian faith” says John. “A narrow interpretation of ‘dominion’ in Genesis 1:28–30 gives a basis for ruthless exploitation of nature, but this needs to be seen ‘through the prism of Jesus’ saving mission’, as Christian ethicist K.C. Abraham puts it.” Violence against creation caused by greed will be redeemed in Christ.

Why civil disobedience? John believes all other options have failed in this case. His church’s code of ethics states that “the first allegiance of Christians is God” and that “sometimes this allegiance may bring us into conflict with the rulers of our day.”

“To summarise,” says John, “this as a social justice issue as well as an ecological justice issue. It is a matter of justice for my neighbours—the people of Kiribati and Tuvalu, the farmers and residents of Maules Creek, and all other communities threatened by big, dirty coal, including the other creatures living in the Leard Forest.

“As a Christian Minister, a father and grandfather I have a responsibility to do my bit to ensure that the environment in which my grandchildren and great grandchildren live is bearable and sustainable.”

John is a member of the Australian Religious Response to Climate Change. His essay can be found in full here: http://www.arrcc.org.au/uniting-church-minister-why-i-protest