Home > Opinion > A new hope or a spiritual decline 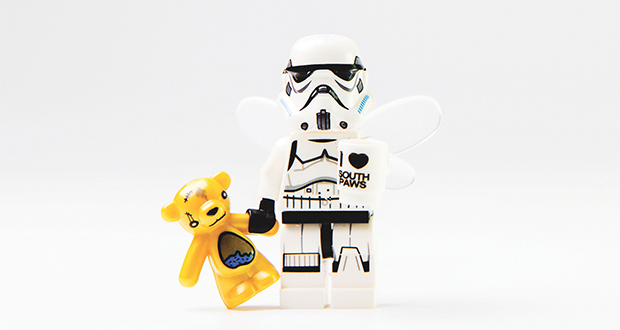 A new hope or a spiritual decline

If Star Wars is a significant spiritual and cultural text for our modern world, what does that say about our dependency on pubescent fantasy to make sense of things (including Christianity)? Ben Rogers argues that the popular science-fiction series is perfectly acceptable for young people but is hardly the stuff of serious contemplation for anyone beyond teenage-dom.

Unless you’ve been living off the grid in a secluded cabin in the woods for the past decade or so (and with the general state of our political and cultural landscape, maybe you’ve been very lucky to have that privilege), you would have noticed that the pop culture juggernaut Star Wars has approached its long awaited conclusion (do these money-makers ever really conclude though?).

Star Wars: The Rise of Skywalker is the official cinematic conclusion to a space opera saga that started “a long time ago” in 1977 when George Lucas—at that stage a moderately successful filmmaker behind American Graffiti and THX 1138—had the canny sense to dump a bunch of well-established film genres in a blender, sprinkle a bit of Akira Kurosawa (think The Hidden Fortress) to the mixture and serve up a visually-dazzling concoction of comic book fantasy and swashbuckling adventure.

Perhaps the smartest thing Lucas did during this period (and far more impressive than anything he committed to the screen) was to work out a merchandising deal for the intellectual property which ended up being a cash bonanza given the amount of Star Wars-related toys, collectibles, household items and games which spawned from the franchise.

Fast forward to 2019 and the House of Mouse (aka Disney) owns the Star Wars franchise (as well as Marvel and Fox properties like The Simpsons, Alien and Predator) and it’s a key strategic part in their well-oiled business machine, ruthlessly dominating our wallets and minds. With theme parks, video games, books, clothing, movies, TV series and other merchandising flooding the marketplace you cannot escape Star Wars’ visibility in our stores, on our screens, on our social media channels and in our households (picked up your Darth Vader toothpick dispenser yet?).

You’ve probably known one or two uber-fans in your lifetime so you’ll know the kind of veneration Star Wars attracts—for many Christians and non-Christians, Star Wars is a religious calling, an intergalactic golden calf which has gently ambled side-by-side with them during childhood, puberty and adulthood (some might say “kidulthood”). I’ve yet to meet a person in my four decades on this planet who can critically champion the films in a measured and historically-astute manner and boast that they don’t own any related merchandising; the fandom is intrinsically linked to a consumer ecosystem of action figures, Lego, video games, clothing, statues, you name it.

And is there anything really wrong with this? I guess not. I’m more of a libertarian spirit and don’t honestly care what people choose to spend their money on (within reason) or what they champion as high (or low) art, but I can’t ignore the fact that the Star Wars circus might just indicate something a tad concerning about the state of our culture and the broader spiritual environment in which the church finds itself.

Full disclosure: I loved Star Wars as a kid, I had the action figures and would mimic all kinds of battles with them in the living room, imagining the sofa to be a Death Star platform and our thick carpet some distant planet’s terrain. The key part of that sentence is “as a kid”. When I was a child, I spoke as a child, I understood as a child, I thought as a child … and I played with childish things. But has the broader culture of adults put away their childish things when they’re not interacting with children? The Atlantic was so bold as to proclaim that “for at least two generations, the Star Wars saga has served as a kind of secularized American religion”; many cite “Jedi” as their religion on census forms, too. It would appear that generations didn’t get the memo about childish things. In fact, it would appear like big sections of our society have not only kept their “childish things” displayed proudly but have started to treat them and think about them with adult reverence.

Two tweets in particular got me thinking about the spiritual swamp in which Star Wars swims, one by British actor Richard E. Grant and the other by The Last Jedi director Rian Johnson. In the former Grant wrote, “Just seen the 1st cast screening of @starwars #THE RISE OF SKYWALKER. What it achieves, weaves and resolves, is a total emotional meltdown & resurrection of the Spirit.” In the latter Johnson shared a tweet by a woman (who has been posting something she loves about The Last Jedi every single day) who commented, “You just need hope & love. That’s what Star Wars has always been about.”

“Hope”, “Love”, “Resurrection of the Spirit” … sound familiar? This is the kind of language you might expect to hear in a Sunday service around Easter but is now being used in the service of a science-fiction soap opera. If Star Wars has “always been about” needing “hope and love”, did we really need over 22 hours of cinema (not to mention the TV shows) to preach to us this generic, bland, humanist platitude? Is “hope and love” the grand cosmic revelation we should take away from it all?

And let’s be very clear: the Christian faith is not only “about hope and love” and, contrary to what some may like to preach, Jesus was not all “about hope and love” as abstract disembodied concepts either. The Christian faith asserts that true hope and love are found in the person of Jesus Christ. Out of a relationship with Jesus, in which he not only rescues us from ourselves and the destructive impact of our self-interest (as saviour) but also directs our lives as we assume a posture of obedient discipleship (as Lord), then we catch a glimpse of transforming hope and divine love which easily transcend the temporal definitions we might place around these words.

For the Christians excited to integrate their devout faith with the franchise, you might be better served joining the Buddhists if you really want to make the mythology rhyme with your own spiritual predilections. True, there are elements of the story which echo Christian narratives (not to mention other cultures’ mythology and storytelling) but the original series of the 1970s and 1980s was far more interested in Eastern-tinged pop-mysticism than exploring the Christian faith. And if you’re still a Zoroastrian, then you are also going to have a great time thinking about how Star Wars fits in with your faith.

George Lucas has gone on the record declaring himself “spiritual” (whatever that means) but maybe the director of the critically-loved The Empire Strikes Back, Irvin Kirshner, drops a bigger hint to the spiritual dimensions of the saga when he said of Yoda, “I want to introduce some Zen here because I don’t want the kids to walk away just thinking that everything is a shoot-‘em’up.” One Austrian academic, Christian Feichtinger, even wrote a paper on the “Space Buddhism” which argued that the series promoted Buddhist elements such as mindfulness and the overcoming of attachment while cultivating an “orientalistic” approach to making the Jedi a “mysterious and fascinating” other.

Carrie Fisher—Princess Leia—wrote in her autobiography The Princess Diarist that the act of parents showing their kids Star Wars is like “they’re introducing the child to a tribe”. “There’s a ritual … it’s as if (parents) know they have this great gift to bestow, and they want to bestow it as perfectly as possible—the perfect time, the perfect place, the perfect situation for passing on this life-defining experience,” wrote Fisher. “And the kids will always remember for their entire lives how they first felt when they first saw their now favourite movie. And they were given this gift from their parents, and now can share it together. Truly a family affair.”

You might be fooled into thinking Fisher is talking about that time when parents talk to their children about Jesus and the faith, an experience that can be truly “life-defining”. Alas, we’re talking about Wookies, robots, space ships and lightsabers.

Again to be very clear: I’m not making the case that you cannot enjoy Star Wars, enjoy Star Wars with your children or empty your wallet on the merchandise. But if you’re over the age of, say, 16, you don’t need to be obsessing over this series, you don’t need to be wokeness auditing the recent films to ensure they conform to whatever progressive orthodoxies are currently in fashion, you don’t need to be trying to find Jesus on Tatooine or expending huge amounts of intellectual energy thinking about the Jedi in the context of Christianity. Hearing grown adults talk about Star Wars like they’re dissecting Dostoyevsky is as baffling to me as if I heard a 13-year-old intellectualise The Wiggles and discuss the broader sociological impacts of Emma Wiggle riding in the Big Red Car.

I know some use Star Wars mythology to talk to others about Jesus and the Christian faith but if you really need science fiction to act as some kind of décolletage to attract churchgoers to the Bible what does that really say about the state of our society and culture, and those spreading the word? Isn’t the awesome power of the Bible’s storytelling enough to hold and enthral generation after generation without the need to think about how Jesus would have been like Obi-Wan Kenobi?

Harry Potter is not great literature. The Marvel movies are not great cinema. And Star Wars should not operate as a quasi-religion of any significance for somebody in their late teens and beyond. Go watch Pasolini’s The Gospel According to Matthew or a few Robert Bresson films if you want to explore an adult relationship between faith and cinema. Read something written before 1900. Start a Twitter debate on utilitarianism if you want to argue with people online about something more valuable than whether The Rise of Skywalker had enough LGBTQ representation.

If you’ve got kids enjoy the series with them and then celebrate the moment when they become adults, put aside such childish things and graduate to a higher understanding of the world, art and the faith. If more adults started to seriously grapple with adult issues without the need to have their childish golden calves accompany them we might be able to confront the very real (and adult) challenges facing the planet. You shouldn’t need Star Wars or Captain America to be able to enter into discourse with other adults about the tensions between economic progress and environmental decay (or to talk about Christianity for that matter). If we are so in need of pop culture comfort blankets to be able to confront the real world, then I’d say the biggest existential threat to our society may not be climate change, it’s mental regression.

Journey always welcomes interested writers to submit their proposals or articles for content that explores the faith and the broader culture.

Do you agree with Ben Rogers’ take on Star Wars and the faith? What relationship should (or could) the church have with the wider popular culture and how do churches respond to problematic mainstream entertainment with a generous orthodoxy? Please let us know your thoughts with letters to the editor.