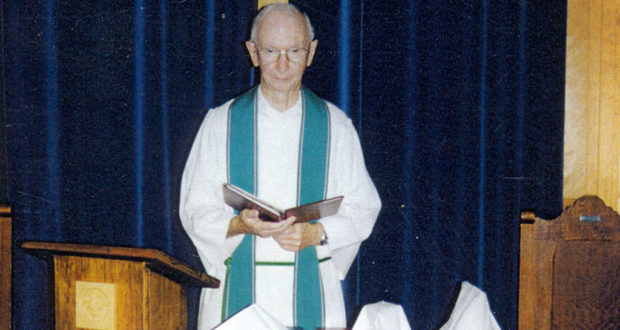 When the Uniting Church formed in 1977 three distinct denominations came together but the focus has largely been on the Presbyterian and Methodist perspectives due to their larger sizes and influence at the time of union. Rev Dr Bruce Upham—one of the Congregationalist Church’s representatives on the commission which drew up the Basis of Union—reflects on his experiences leading up to the inauguration.

Although the Congregationalist Church was small in size, we were able to act as honest brokers, mediating between the two larger bodies, the Presbyterians and the Methodists. They trusted us.

Nationalist interests did enter discussions to a limited extent, in that the Presbyterians were very conscious of their Scottish background; for their part, the Methodists emphasised the place that the teachings of the Wesley brothers had played in their theology and worship, and wanted it to be evident in the Uniting Church.

Regional differences also played a part. For example, in the St George area on the south side of Sydney, the Congregationalist churches tended to be more evangelical than most, with the result that some churches from that area did not enter the Uniting Church.

Bishop Lesslie Newbigin—one of the first bishops of the Church of South India—visited Australia at the time when the discussions were going on between the 21 representatives who were preparing the Basis of Union of the Uniting Church. He spoke to us, was very encouraging, and made several helpful suggestions from his experiences during the Church of South India’s union between Anglican, Congregational, Methodist and Presbyterian churches in 1947.

Newbigin’s visit may have also prompted the approach that came from the General Synod of the Anglican Church of Australia, seeking to join in the discussions. This had to be referred to the three federal bodies.

The Congregational Union of Australia voted in favour. The Methodist and Presbyterian bodies voted against, mainly on the grounds that it would delay what had already been a long process.

My personal view is that it was a great pity that the vote went that way; an Anglican element would have led to a much richer church in terms of outlook and tradition, and may have helped avert some of the problems and weaknesses that have appeared in the Uniting Church.

It certainly would have led to a much stronger church, able to exert more influence with governments.

While the Uniting Church has been very active, for example, in reminding governments of their responsibilities, there is one area where I personally have been disappointed, and that is in the quality of worship in many congregations.

I trained in Camden College, Sydney, during the time when Raymond Abba was principal. One thing Raymond passed on to me has never left me: the importance of worship, of being immersed in the mystique of Christ’s presence.

That is the centre, the powerhouse of the Christian life: there is no substitute.

My hope for the future is that God’s spirit will lead us to growth in our understanding and practice of worship.