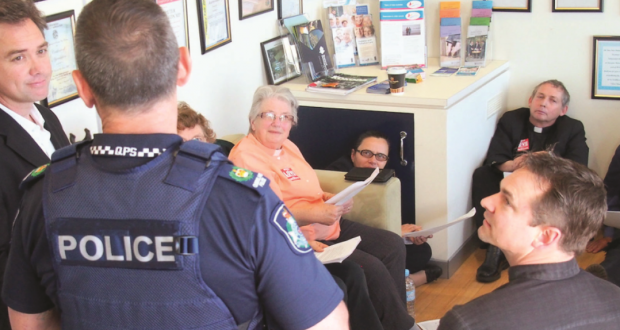 Eleven priests, nuns, ministers and Christian lay leaders were removed by police from the Strathpine office of federal Health Minister, the Hon Peter Dutton on 9 September. The ecumenical group was holding a peaceful prayer vigil protest calling for the release of children from Australia’s immigration detention centres.

The group had declared its intention to continue their prayer vigil and not leave until Mr Dutton had indicated his unequivocal support for the protection and mental wellbeing of children in immigration detention, and had moved to release them immediately from detention.

Police were called, and group members declined to leave as directed. They were detained, led outside the building and then released without charge.

Those participating in the vigil were from a range of Christian traditions: Wesleyan Methodist, Anglican, Uniting, Catholic, Quaker, Baptist and the Waiters Union, a grassroots Christian community network. Rev Dr Charles Ringma of the University of Queensland also attended.

Another 15 people supported the vigil outside, holding placards and praying.

The group is part of a nation-wide Christian movement of prayer and non-violence called Love Makes a Way, which has a particular focus on the plight of children in detention.

Spokesperson for this Brisbane action, Uniting Church pastor David Busch, said, “We believe the federal Health Minister has a duty to advocate for the health and wellbeing of all people in Australia. We have been praying for him, and for the children in detention who experience mental and emotional suffering because of our nation’s policies.”

As part of the prayer liturgy in Mr Dutton’s office, the group read extracts from a report recently published by the Australian Churches Refugee Taskforce, called Protecting the Lonely Children, which concluded that the current treatment of children seeking asylum was “state sanctioned child abuse”.

Mr Busch said, “That report makes clear that these children have nobody to advocate for their needs, and their stories are rarely heard. By taking this action today, these Christian leaders have sought to draw fresh public attention to what that report says is an unconscionable situation.”