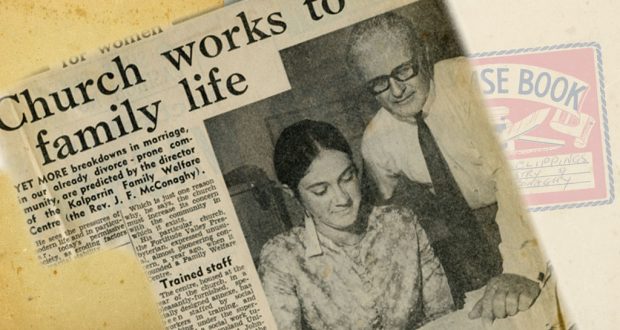 Kalparrin: a legacy of hope

It’s been nearly 50 years since the Fortitude Valley Presbyterian Church in Brisbane established the Kalparrin Family Welfare Centre, a pioneering project in congregational outreach and community care. Marion McConaghy, daughter of founder and director Rev James McConaghy, looks back at how one man’s vision galvanised a community.

When Rev Jim McConaghy began ministry at the Fortitude Valley Presbyterian Church in Brisbane in the 1960s, the needs of the growing number of disadvantaged inner-city residents were immediately apparent.

Jim realised that if at-risk people were going to find their way towards independence, they needed targeted counselling sessions from professionals such as social workers, psychiatrists, doctors and solicitors. How could the church help?

The Kalparrin Family Welfare Centre was born, a place of hope and healing for individuals and families. Its name was based on an Aboriginal word meaning “to bear another person’s load”.

“The fundamental purpose of the centre was to provide encouragement, support and counsel to families and individuals in personal, social and economic difficulties so that they could develop strength, confidence and resources to manage their own affairs independently,” wrote Jim in a letter to the Honourable S.D. Tooth in 1968.

The centre was opened in February 1969, financed by the church with the assistance of a $5000 grant from the state government. Jim collaborated with the University of Queensland to establish a Social Studies Training Unit in the centre. Professional legal, psychiatric, financial and marriage guidance facilities were operational.

Clients were drawn from across the inner-city suburbs, including people referred from hospitals and other agencies. Within a short time Kalparrin had undertaken more than 700 interviews and was carrying a capacity case load of 40 people.

Kalparrin continued to grow and when Rev Richard Diffin and his wife Wendy began their ministry at the church in 1971, they added a community legal service and women’s refuge.

“To finance this, five thrift shops were opened and many stalls were held along with progressive dinners, fashion parades, dinners with guest speakers etc.,” says Wendy, who recalls that there were nearly 100 volunteers involved at the time.

“The Fortitude Valley Rotary Club donated a truck to pick up donations of furniture and clothes … the club also donated a 12 seater bus to pick up women and children escaping from domestic violence.”

In 1980 Kalparrin was placed under the control of the Queensland Synod of the newly formed Uniting Church. Fortitude Valley Presbyterian Church later closed and was sold to a private concern.

Marion McConaghy is a member of St Andrew’s Uniting Church, Brisbane and convener of the Vera Wade Gallery. She is currently compiling information about Kalparrin. To share your story contact marion.mcconaghy@bigpond.com