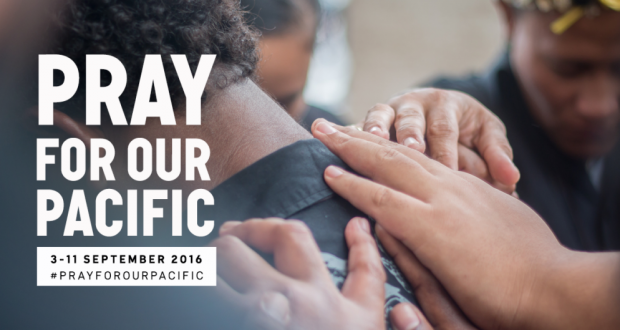 Pray for Our Pacific. Photo: 350pacific.org

The Pray for Our Pacific campaign from 3–11 September is encouraging Australian faith communities to host a special service or event to highlight the region’s ongoing challenges of climate change and environmental damage.

Pacific Island nations, which are particularly vulnerable to the impacts of climate change, face a range of environmental threats such as cyclones, floods and droughts. Thousands have already left the region due to poverty brought about by poor crops, tainted water and structural damage to homes and businesses from dangerous weather conditions.

Rev Alimoni Taumoepeau, minister at Strathfield Homebush Uniting Church, says, “People in villages scattered across the Pacific and other low-lying lands are suffering from the results of the decisions and lifestyles of others in lands far away.”

“This is an injustice. More than that, when the sea has swamped their land, there is no high ground to which they can flee. This is terrifying. People of faith have a long history of praying for, and standing in solidarity with, people on the receiving end of injustice. Pray for Our Pacific has really struck a chord with us.”

A recent survey jointly undertaken by the United Nations University Institute for Environment and Human Security and the United Nations Economic and Social Commission for Asia and Pacific found that more than 70 per cent of households in Kiribati and Tuvalu and 35 per cent of households in Nauru reported family members who would migrate if climate stressors worsened. Alarmingly, only approximately a quarter of households surveyed had the financial means to migrate if required, which could lead to a major humanitarian challenge should conditions worsen with many unable to leave.

Some of the ways your congregation can get involved include dedicating a prayer during your service, conducting a Pray for Our Pacific prayer circle, sharing stories from relevant scriptures during Sunday School and sharing local stories about the impact climate change has had on the community.

Rev Seforosa Carroll, a Pacific Island migrant and Uniting Church minister with UnitingWorld, says, “Pray for Our Pacific will bring the realities of human-caused climate change to the front of congregants’ minds in our churches, where other initiatives have attracted limited interest. We’ve welcomed the opportunity to promote this.”

For more information on Pray for Our Pacific visit 350pacific.org/prayforourpacific