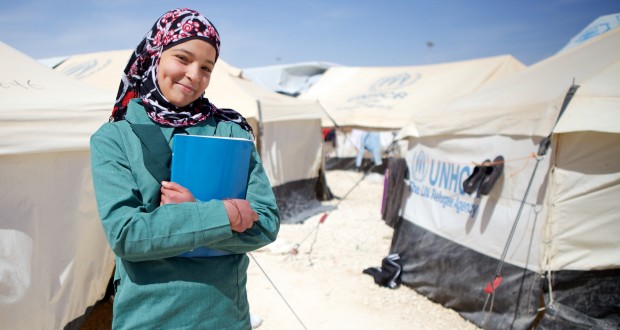 Hana, 16, fled Syria after her house was bombed and some of her relatives tortured. Photo: Act for Peace

Churches called to act for peace in Syria

Act for Peace, the international aid agency of the National Council of Churches in Australia, visited the Za’atari refugee camp in northern Jordan, supporting Syrian refugees fleeing the crisis. As the conflict worsens, Act for Peace asks for continued support from the Christian community, writes Karen McGrath.

Just over a year ago there was only sand, dotted villages and a school where the Za’atari refugee camp in northern Jordan stands today. The Syrian uprising which began just 40 km away in the town of Dara’a rapidly changed this as thousands of Syrians began to cross the border on foot each night to flee the worsening conflict.

In August 2012 the population of the camp was 15 000. Just over one year later, Act for Peace visited the Za’atari refugee camp and saw the astounding impact of the Syrian crisis. In the wake of chemical weapons attacks, the United Nations refugee agency UNHCR now estimates camp numbers to be over 140 000—close to the population of Cairns—despite being packed into a space measuring just 3.5 square kilometres.

News of chemical attacks in Damascus and the threat of international intervention have caused Syrians to continue to flee their homes. UNHCR has estimated there are 6.25 million Syrian refugees—the largest displaced national group in the world forming the “biggest displacement of all time”.

Over the past two years many international agencies have reported evidence of war crimes on both sides of the conflict, but Act for Peace maintains the priority needs to be civilian protection and a political solution to the crisis, not military intervention.

Act for Peace condemns the use of chemical weapons but also condemns the justification of violence in the name of peace. Rev Tara Curlewis, Secretary of the National Council of Churches Australia, is seeking a peaceful solution.

“External military intervention will only increase the suffering of the people and increase the risk of escalating sectarian violence,” she says.

Without further action by the international community to increase humanitarian access and protection through safe areas, far too many people remain at high risk of more atrocities.

Act for Peace brings together 19 member churches in Australia and unifies Christians to raise vital funds to protect Syrian refugees in the midst of conflict. The combined efforts of churches, including financial support, prayer and peace advocacy, make a tangible difference for those in need. It is the responsibility of Christians in both Australia and around the world to stay committed to a peaceful and diplomatic solution, for the sake of the men, women and children behind the politics of the Syrian crisis.