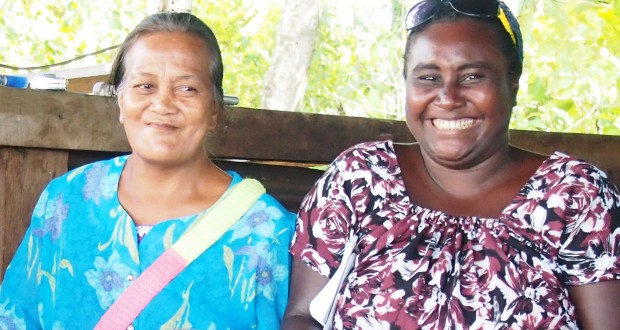 This year, UnitingWorld turns its focus towards gender equality and addressing violence against women in the Pacific Island region. Ashley Goetze spoke with Bronwyn Fraser from UnitingWorld.

A self-described “link and chain” between the Uniting Church in Australia and Pacific Island church partners, last June UnitingWorld facilitated a workshop in Fiji that involved women representatives from the four Pacific nations of Kiribati, Solomon Islands, Vanuatu and Tuvalu.

During this workshop, gender-based violence was identified by women as a dire concern in their communities, backed by an extensive United Nations survey of men in the Asia Pacific region that revealed 45.6 per cent of men admit to engaging in physical or sexual violence against women and 24.3 per cent to rape.

UnitingWorld has partnered with women’s church organisations in the Pacific to tackle the issue head on.

As a result, training courses, such as the Livelihood and Basic Business Skills workshop run in Kiribati earlier this year, have marked the beginning of a long road to change.

“If women are more independent in terms of income and they don’t have to rely on their husbands’ income there’s more likelihood they’ll report violence when it happens,” explains Bronwyn Fraser, Manager, Livelihoods and Peacebuilding Program (Pacific) in the Relief and Development department, UnitingWorld.

These behavioural changes are long-term and therefore in opposition to the First World expectation of immediacy, where tangible quick-fix solutions are often found easier to get behind.

“People want to hear the individual story of change and change takes longer. It’s as though if you can’t tweet it, it didn’t happen,” says Ms Fraser.

Perhaps more indicative of the type of change UnitingWorld works towards is the story of Veera, the elderly lady from Kiribati whose story Ms Fraser recounted as one who left a lasting impression.

“She really spoke to my heart. She talked about the way things had always been, when women couldn’t access knowledge, couldn’t access information, education or training,” says Ms Fraser.

“She knew that the training they had done would kick-start action, she knew that it would make a difference, but what was more important to her in that moment was the dignity and value she felt at her age, to be finally invited to learn.”

Look out for a short DVD from UnitingWorld on gender equality and what that means in the Pacific, coming soon.