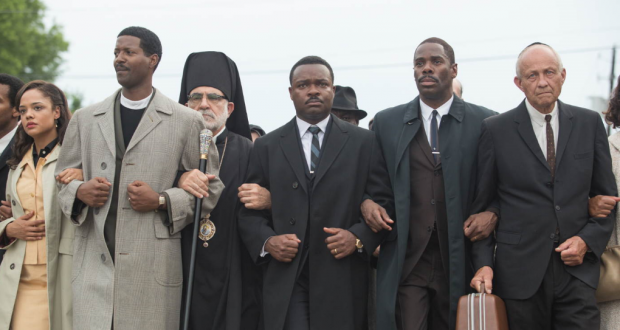 The list of Martin Luther King Jr’s achievements is long, and he looms large in our collective consciousness as a champion of civil rights and nonviolent, direct action. King was president of the Southern Christian Leadership Conference and played a major role in achieving a great shift in civil rights in America. For his great many achievements he is honoured every year on Martin Luther King Jr Day in the United States.

Unlike most biopics, Selma looks at just one small slice of its subject’s life and accomplishment. Director Ava DuVernay focuses particularly on the 1965 Selma to Montgomery voting rights marches and the role King (portrayed by David Oyelowo) played in their coordination.

Unlike other popular Hollywood films about race relations like The Blind Side and The Help, Selma pointedly avoids the white saviour narrative and focuses on how black Americans, through sustained, unyielding, nonviolent action, made great strides towards achieving the same rights and freedoms as white people.

There has been a small controversy over the portrayal of President Lyndon B. Johnson (Tom Wilkinson) as a reluctant supporter of the civil rights movement—sources who knew him say he was much more enthusiastic—but regardless, his depiction serves as a shorthand for the highly strained relationship between King and the federal government. DuVernay is very clear that progress towards equality has not been achieved because a white president took pity, but because black people spoke up and demanded it.

But why nonviolence? Considering its narrow scope, it is not surprising there is little time given to King’s motivation for his particular methods. Little details, like a statuette of Ghandi in King’s house and a tense conversation between Coretta Scott King (Carmen Ejogo) and Malcom X (Nigel Thatch), are a little nod to those in the know. The film also emphasises the responsibility people of faith have to stand up for the disenfranchised. When King calls for a second march to Montgomery, even though the first ended so tragically, hundreds of people of many races answer—and all of them are portrayed as religious.

Although there is a particular focus on King, it’s the resolute citizens of Selma who are really celebrated here. DuVernay has been particularly careful to include the stories of some of the women who were instrumental to the marches including Dianne Nash (Tessa Thompson), Amelia Boynton Robinson (Lorraine Toussaint) and Annie Lee Cooper (Oprah Winfrey).

Selma is a triumph, and will remain an influential film long after it disappears from cinemas.