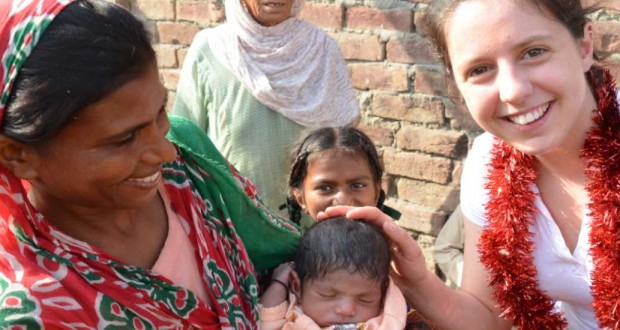 How can I help?

All giving should be rooted in relationship, writes Ashley Thompson.

Last year your aunt gave you ice tongs for Christmas. You didn’t want or need them. In fact you weren’t even aware ice needed tongs! So today, like many other misguided gifts from relatives, they live in a spare cupboard waiting to be re-gifted. You’re positive you’re not the only one who’s been given something you never asked for, and now that you think of it, you’re probably guilty of doing it yourself.

As Christians we are called to show compassion to the poor but sometimes we forget that there are a great variety of ways to give, or that a gift without consideration for its recipient is meaningless.

Rev John Ruhle, minister with The Gap Uniting Church in Brisbane and UnitingWorld National Committee member, understands the damage an ill-informed gift can cause, particularly when Westerners give to developing nations.

“We cause damage when we disempower a local community by doing something for them that they can do for themselves,” says John, “or when we leave them with a resource that they have to physically put their own energy or resources into maintaining. If the local ownership is not there it can actually harm a community.”

Genuine relationship with local churches in Africa, Asia and the Pacific has been crucial to UnitingWorld’s success in developing sustainable projects.

“For me Christmas is about Jesus coming to us and God saying I want to be in a relationship with people. Jesus is God incarnate physically with the world and when he formed relationships with people he waited to find out what their needs were—then if he had an opportunity to respond and help with those situations, he did. But the giving that he did with people began with relationships.”

While short-term missions are commonly becoming a means for linking communities, there is evidence that they can do more damage than good. Fikkert and Corbett’s critically acclaimed work When Helping Hurts: Alleviating Poverty Without Hurting the Poor … and Yourself (2009) cites the potential damage short-term missions can do when lacking cultural sensitivity or putting projects above people.

“By definition, short-term missions have only a short time in which to ‘show profit’, to achieve pre-defined goals. This can accentuate our [Western] idols of speed, quantification, compartmentalisation, money, achievement and success. Projects become more important than people. The wells dug. Fifty people converted … Individual drive becomes more important than respect for elders, for old courtesies, for taking time,” say Fikkert and Corbett.

Among a group of 12 from The Gap Uniting Church, John Ruhle recently returned home from a visit to UnitingWorld’s north Indian partner, the Church in North India Amritsar Diocese. In acknowledgement of these concerns, he believes a trip based on relationship, without an agenda, is the key.

This two-way relationship sees a genuine growth in understanding the needs of our geographical neighbours and likewise invites them to experience Australia’s cultural and economic systems.

“We were in the centre of the Toowoomba floods and Lifeline Darling Downs managed a staggering 75 tonnes of donations that came from all over Australia, from as great a distance as Far North Queensland all the way to Western Australia,” he says.

Derek recognises the heartfelt intent behind the giving and the fact that people needed to feel connected to the Darling Downs during this time. In this scenario however, money would have been easier to manage.

“It took us three years to process it from start to finish,” says Derek. “I certainly had staff crying and distressed when all the stock was arriving and I remember one of them saying, ‘No more Derek, tell them to stop. Where are we going to put this?’ But you can’t say ‘stop’, people needed to be able to donate and we were the vehicle it went to and we had the responsibility to sort it and process it and so that’s what we did.”

Every year at Christmas time, Australians are bombarded with endless charitable campaigns—all from worthy causes. Relationship with a charity or affiliation to a cause however informs us for better and more decided giving.

“Recent statistics show an excess of 56 000 charities are registered in Australia right now so people have a wide choice about where they want to put their dollars and what we are seeing in more recent times is that people limit themselves to maybe three to five charities,” says Derek.

Derek and John both agree Australians are generous and want to give but that they also want to be confident that their giving is going to make a difference.

“One of the strengths of UnitingWorld is that it is actually quite small,” says Rev John Ruhle. “We don’t have the scope of some of the huge relief and development organisations but it is all based on relationships and a very small chain between the support a congregation gives and those we are supporting on the ground.”

The importance of listening cannot be overstated in a space where people tend to assume the needs of another’s cultural group.

Louise Thomas is a theological student and a member of Townsville’s West End Uniting Church. As a member of the Uniting Aboriginal and Islander Christian Congress she too believes relationships inform us for better understanding of each other’s needs.

“Understanding brings unity and it brings support and it also brings help … through churches we are doing it slowly; it is a slow process.”

Louise says the greatest need of her people is social welfare and that while help should be offered it is also up to them to reach out and accept that help.

Understanding, listening and researching the needs of who you’re giving to, whether that is a family member or not-for-profit, is at the heart of better giving this Christmas. Volunteering, unsorted donations, cash and bequests are all helpful but don’t be shy in saying “Thank you but no thank you” to the smiling young advocate at the charity kiosk this December.

“The easy thing to do is slip them a couple of dollars because you feel better and they feel better,” says John, “but the hard thing is to actually say ‘I am saying no because I am already supporting somebody else and I am committed to them and I have a relationship with them.’ ”