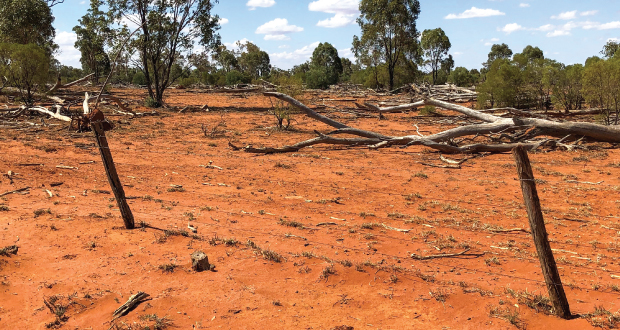 A property in the St George district which has had very little rain at all in the last two years. Photo: Rob Hemming

Drought is a slow-moving, insidious natural disaster which affects the very heart of community. When the rains finally come, recovery will be only just beginning. Dianne Jensen explores how Uniting Church congregations are stepping up to support their counterparts in the bush.

“Well, it’s still brown,” writes Rev Jenny Coombes from Longreach Uniting Church at the heart of Queensland’s drought-stricken west. “There have been a couple of bursts of colour when we got enough showers to get some wildflowers growing in winter 2016, and this gave me a taste of what it could be like.”

Rainfalls at the beginning of February will bring another flush of green and perhaps fill dams on some lucky properties. But make no mistake: the long shadow of drought, with its deep-seated economic and social impacts, still falls across central and western Queensland.

Journey visited the region in June 2015, accompanying Moderator Rev David Baker and hosted by Jenny and her husband Peter. We visited properties where shearing sheds were empty and remaining cattle hand-fed, and talked to local business people reluctantly cutting back on staff.

Nearly four years on, Jenny reports that properties are being sold and businesses closing and as families leave, schools lose teachers and sporting and community clubs shrink.

“Longreach was partially drought declared in September 2013, and fully in January 2014. People have said that they have a drought plan for three to four years, maybe five, but not six to seven and still going. The length of the drought is really bringing people to breaking point.”

Rural churches, the traditional sources of community support and cohesion, are also struggling.

“Any organisation that relies on donations for funding is impacted—and that includes the local churches. As people’s income drops so does their offering,” says Jenny.

“There is great concern about what will happen when it does rain—will the banks foreclose then? For the moment, people just keep on keeping on.”

Uniting Church members and congregations are continuing to respond to the crisis by raising funds and establishing connections with rural churches.

Drought relief continues to be a key focus of the Uniting Church Foundation through the Disaster Relief Fund, which channels individual and congregational donations to local churches who act as agents in providing assistance (both financial and pastoral) to local communities in need. This fund offers grants of up to $5000 per congregation for drought relief in local and surrounding areas.

Synod Chief Fundraising Officer Raushen Perera says that this wider church support has been key to keeping hope alive for many.

“The heartfelt response across Queensland is enabling drought-stricken congregations to provide practical support to their community. Knowing that the wider church has their back shares the burden and lifts spirits during these dark times.”

Community comes together in Buderim

One of the Queensland congregations supporting the drought appeal is Buderim Uniting Church. The special events team led by Treasurer (now retired) Ron Hall hosted a mini fair on the church grounds in August last year.

It was an opportunity for the congregation and Buderim community to rally together.

“The desperate drought conditions and distress of the farmers weighed heavily on our hearts, challenging our congregation into action,” says a church representative.

“We were much encouraged by the generous donations from local businesses in providing meat and rolls and items for the barbecue and morning tea. A local strawberry grower gave a most generous donation of punnets of strawberries for sale.”

When the going is tough

Buderim funds are going to Barcaldine and surrounding areas in Central Queensland as well as to St George Uniting Church in Queensland’s west, which was formerly twinned with the Buderim congregation. St George church council chair and local farmer Rob Hemming says the money will help those doing it tough—whether they be a farmer, grazier or business in town.

“We decided, through a process of prayer and discernment, to aim at helping a small number of people in a significant way rather than try to help a lot of people in a token gesture. We realise that no amount of available money can fix a drought problem of this magnitude but a decent donation can show that someone really does care.”

With rural communities demoralised and just plain tired, Rob believes that there has never been a more important time to present the Christian message of hope.

“If our hope is in rain or prosperity, this drought will shipwreck our faith; but when our faith is in Christ—our hope is secure in the true riches of an eternal relationship with Christ. Please pray for us.”

The role will administer funds donated to Longreach Uniting Church for areas in and around Longreach, liaise with community groups and donors and provide pastoral care. Jenny has already met with federal, state and local representatives.

“By having the chaplaincy position linked to the church, it raises awareness of the Uniting Church’s presence and the fact that we are here for the long term. We live here, and so we can build trust with locals.

“It’s great to have someone in the street walk up and say, ‘Hi Jenny, I’m …. Thanks for the work the Uniting Church is doing.’ ”

Jenny’s role will try to ensure that donations have a positive rather than a negative impact.

“Bringing in food or grocery items can tip small local businesses over the edge and lead to waste. Donors also need to consider handling costs—and whether items are needed or wanted.”

Gifts from the heart

Drought Appeal Coordinator Jann Niven at Saint Andrew’s Uniting Church says their fundraising started with a message to a church member from a rural friend struggling to come to terms with the failure of their farming venture.

“The final straw was the comment, ‘We can’t even afford the bullets to shoot our animals dying from lack of food and water,’ ” says Jann.

“Another congregational member set about enquiring about ways to help. We settled on the idea that we should collect money donations.”

The donation request was over two Sundays, and the Social Justice Group directed the proceeds from their regular monthly stall after worship. The church council added a further contribution.

“We requested that the money be distributed in a reasonable amount to fewer people, to provide a reasonable level of assistance, rather than spreading our gift thinly among many,” says Jann.

At Albert Street Uniting Church the congregation harnessed its musical talent in October last year to host “A little water music; a concert to break the drought”, organised by church organist Greg Hartay-Szabo.

“The organ solos, provided by my esteemed colleagues Denis Wayper and Ross Windsor from the Organ Society of Queensland and myself, displayed a colourful variety and ‘water’ was a returning theme throughout,” reports Greg. “Other highlights included items performed by Full Spectrum Brass, also featuring a tribute to the centenary of Armistice Day by a work inspired by the words of the Te Deum, ‘Lord, Save Thy People’.”

Greg says that the concert was part of the mission of Albert Street and Wesley Mission Queensland to support others during tough times.

“The message of the Albert Street congregation, together with guest musicians, is that they are not alone—as children of God we will never hesitate to help our brothers and sisters in such times of trial as this nationwide drought.”

Turning on the tap

Funds from Saint Andrew’s and Albert Street have been directed towards the Granite Belt Uniting Church project to pay for water costs for struggling families.

Rev Kaye Ronalds, congregation minister and Chair of the Queensland Synod Disaster Recovery and Response Committee, says the idea was seeded when a rural congregation member commented that he had purchased water three times in 2018 to fill his tanks.

Congregation leaders talked with the local water contractor who suggested families who needed water, but had no capacity to pay the average $300 cost.

“Mostly these people living on small farms or on rural blocks and working in town or industry get enough rainfall to fill their tanks for domestic use. However, last year there simply wasn’t sufficient rain,” says Kaye.

These are the ties that bind

“Visit these iconic towns and experience some country hospitality. Every dollar you spend at a motel, a café, at the small shops in the main street helps keep these communities alive. And drop into the local Uniting Church and say ‘Hello, we’re thinking of you and praying for you in Bundaberg or Kenmore or Cairns or wherever you’re from.’ ”