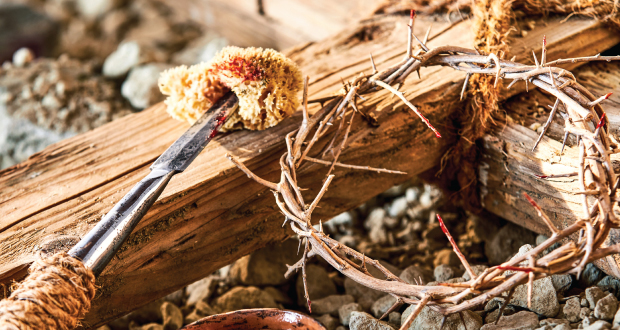 As the famous quip goes you can be assured of two things in life—death and taxes—and we all recognise that in many ways death signals the end, closure, finito. But as Simon Gomersall argues, the death and resurrection of a thirtysomething man thousands of years ago in the Middle East revolutionised our thinking around death and signalled we should never consider all hope lost in the face of dying.

Phillip Yancey talks about a horrible childhood experience, where he received as a gift one Easter a six-week-old kitten, named “Boots”. It was his first pet which he immediately fell in love with. But tragically the same day he received it, some neighbours came over for an Easter egg hunt, bringing with them a Boston terrier, which by instinct, before anyone could stop it, seized the kitten in its mouth, shook it like a sock, and dropped its lifeless form on the grass. Yancey says, “I could not have articulated it at the time, but what I learned that Easter under the noonday sun was the ugly word ‘irreversible’. Boots was dead, irreversibly dead.”

In Western society we spend an enormous amount of time and energy distracting ourselves from the inevitability and the irreversibility of death. Sociologist Ernest Becker in his Pulitzer Prize-winning book, The Denial of Death suggests that most people in western society spend much of their lives trying to distract themselves from the reality they are one day going to die. Our obsessions with entertainment, looking younger and the acquisition of material possessions are attempts to side-track ourselves from our own mortality.

Death is our enemy. It takes from us those we love. It cuts short the development of time, gifts and talent. We have virtually no control over it except sometimes deferring slightly its inevitably through medical intervention. Observing a friend’s death, Samuel Johnson penned: “At the sight of this last conflict, I felt a sensation never known to me before: a confusion of passions, an awful stillness of sorrow, a gloomy terror without a name.”

Contrast Samuel Johnson’s words with these from the Apostle Paul, “Where O death is your victory? Where O death is your sting. The sting of death is sin, and the power of sin is the Law, but thanks be to God who gives us the victory through our Lord Jesus Christ. Death has been swallowed up in victory.” (1 Corinthians 15:54,55)

What makes the difference between these two contrasting attitudes to our great and final enemy of death? The resurrection of Jesus.

After Jesus Christ was crucified and his death confirmed, he was laid in a tomb, which was closed with a large stone, Roman guards were placed outside, to deter Jesus’ followers from acts of civil disobedience. In the minds of the Jewish and Roman authorities, this whole Jesus episode was over. For three years Jesus had been travelling around Palestine, drawing huge crowds; he had done a lot of good. But in a day and age of civil unrest, he had also made some dramatic claims about himself which the authorities simply couldn’t ignore. A few decades either side of Jesus’ life there were at least a dozen individuals who made messianic claims about themselves (claimed to be a “saviour” of some sort). They started little rebellions or movements to try to free Israel and all of them met the same end as Jesus: executed by the governing authorities, which very quickly and successfully halted the movements they commenced.

In Jesus’ case, that normal strategy failed miserably. Within a few days of his execution, Jesus’ tomb was found empty. Jesus’ followers were transformed from a group of dejected, defeated, fearful failures into a dynamic unstoppable force that began transforming the world, all because they were utterly convinced Jesus had appeared to them alive and that presence had been confirmed by an experience of the dynamic power of God’s Spirit.

They believed not in a resuscitation (that Jesus hadn’t quite properly died on the cross and recovered), nor a reinvigoration (that although Jesus was dead they had been newly motivated by his memory or teaching) but a resurrection. They believed Jesus had been fully dead and, by an act of divine power, Jesus’ physical body had been recreated, given a new life, a new form that would allow it to experience life on earth but also transcend life on earth; to appear within the limitations of time and space, but not be bound by time and space.

Of course, it is possible to mythologise the resurrection stories and suggest that rather than a physical resurrection, it was the memory of Jesus’ teaching or the spirit of Jesus’ person that came back to life in his followers’ hearts. These theories generate as many questions as they answer, especially with regard to making sense of our existing historical data. As theologian Adrian Warnock asserts in Raised with Christ, “Few historians doubt that the church was founded on a belief that Jesus had literally risen from the dead. Any contrary theory needs careful explanation.”

CS Lewis put it this way in God in the Dock, “The Christian story is precisely the story of one grand miracle, the Christian assertion being that what is beyond all space and time, what is uncreated, eternal, came into nature, into human nature descended into his own universe and rose again, bringing nature up with him. It is precisely one great miracle. If you take that away there is nothing specifically Christian left.”

Mel Blanc was the voice behind virtually every Looney Tunes cartoon character. At the end of every cartoon, Porky Pig would come onto the screen, with Mel’s voice always saying the same thing: “That’s all folks!” When Mel Blanc died, you can guess what epitaph his family put on his tombstone: That’s all folks!

This raises perhaps the most important question that any human being can ponder: Is death the end of existence or is there something more? Must we shudder under the finality of a “That’s all folks!” or is there a greater hope?

Two men were visiting an art gallery and came across a painting of a chess game. One character in the painting looked like a regular man but the features of the other were slightly adjusted to embody an otherworldly evil. A man playing chess with the devil. The man in the painting was down to his last piece on the chess board. The painting’s title: Checkmate.

However, one of the two observers was an international chess champion. Something about the painting intrigued him and he began to study it. He became so engrossed that his companion grew impatient and wandered off. He returned to find the champion still intensely examining the painting. Eventually the chess player stepped back and exclaimed, “There is something wrong with the painting.”

His friend naturally enquired after what he could see. The man said, “The title of the painting is Checkmate. But I can see that the king still has one more move.”

The illustration directs us toward the message of Easter. The king still has one more move. This is the Easter hope. On Good Friday Jesus was tried, whipped, beaten, mocked, scorned and hung on a cross to die; and then laid in a tomb to rot. His enemies said, “That’s all folks! Show’s over. Time to go home. Check mate.” But they were wrong. The king still had one more move.

In the novel, Cat’s Cradle by Kurt Vonnegut, an important book comes to light. It is titled What Can a Thoughtful Person Hope for Mankind on Earth, Given the Experience of the Past Million Years? The chief character is anxious to read it. But when he does, it doesn’t take long. The whole book consists of one word: “Nothing”.

The resurrection smashes that sort of despair, because on that first Easter morning God did something new. He created something he’d never made before. In the resurrected body of Jesus was a new order of creation and the thing we are told repeatedly throughout the New Testament is that Jesus was a prototype of what God one day intends to do with all of us. In his resurrection, Jesus reached into the future to access the fullness of life, power and love that marks and defines the kingdom of God and he dragged that back into the present of this groaning, struggling, failing world. The resurrection was the original “back to the future”.

The resurrection, therefore, is the ground of our assurance, it is the basis of all future hopes, and it is the source of power in our daily lives here and now. It gives us courage in the midst of persecution, comfort in the midst of trials and hope in the midst of the world’s darkness. Hope really does begin here. The resurrection eloquently proclaims there is no defeat that cannot be overturned and there is no loss that cannot be redeemed. The end is never the end. In the mercy and grace of God, any end can simply be a new beginning.