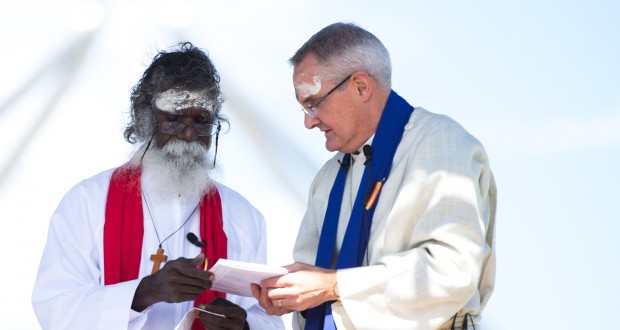 The Destiny Together week of prayer and fasting is over. Bruce Mullan looks at what’s next in the Uniting Church’s journey of reconciliation with First Peoples.

The paint was washed off the foreheads and the chairs packed away but for those who participated in the Canberra prayer vigil and at other Destiny Together—Justice for First Peoples events around the nation, reconciliation will always have names and faces.

In what Uniting Church President Rev Dr Andrew Dutney called a “foretaste of that reconciliation and renewal that is the end in view for the whole creation”, the week and the vigil on the lawns at Parliament House gave new resonance to the Uniting Church’s covenant between Indigenous and non-Indigenous people.

It has been the faith in the power of God in Christ to bring divided peoples together that has kept the momentum of the reconciliation process in the Church moving forward and it is clear that the journey is not over yet.

“We’re very different from each other. In many ways we’re very divided. But in Christ we have been made into one body … and we’re in pain,” Andrew said to the gathering.

For Uniting Church President-elect Stuart McMillan, even though it was held on the lawns of Parliament House, the Canberra vigil was quite a non-political event and very different.

“We weren’t asking for anything, we were praying about something. We were asking God rather than asking politicians to act in a particular way,” says Stuart.

“We were seeking God’s justice and there was something particularly powerful about that. It was kind of hard for politicians to understand what we as people of faith were doing.”

During the Destiny Together week, Chairperson of the Uniting Aboriginal and Islander Christian Congress Rev Rronang Garrawurra spoke to ABC’s John Cleary through an interpreter about how he saw conversation with Aboriginal people being successful.

“We are sitting down on the land and that is where we need you to come and sit with us and listen to us so we can help out and sort out the issues and work together.”

Chairperson of the Calvary Presbytery Rev Dennis Corowa says that Australia is busy trying to find a cultural identity and doesn’t recognise that it’s had one since well before the arrival of Second Peoples.

“Australia wants a bit of costume but we haven’t got any dance or language—it’s all been imported.

“But Aboriginal people have the language; we’ve got the dance and we’ve got the song—all of it available in the spirit of coexisting.”

Dennis thinks the Uniting Church has done reasonable work in the process of recognition of and reconciliation with First Peoples.

“The autonomy that Aboriginal people have within the Uniting Church with self-determination on certain aspects within the church’s life is really good,” he says.

Dennis says the Uniting Church has been helpful not just in the support for pastoral work with Aboriginal people but also through its work with schools providing opportunity for education and training and by ensuring opportunities for Aboriginal employment in the agencies of the church.

For The Gap Uniting Church member Peter Jackson, his volunteer role as Co-chair of Reconciliation Queensland is the current part of a lifetime commitment to the principles of reconciliation with First Peoples.

Peter remembers from his youth sitting around the kitchen table with his parents, family and their friends and having conversations leading up to the referendum on constitutional change that gave Indigenous Australians the vote on 27 May 1967.

Forty-seven years later, the Queensland Constitution acknowledges Aboriginal and Torres Strait Islander peoples but the Australian Constitution still does not.

Advocates say that a constitution reflects the nation’s values, acknowledges its past and provides hope for its future and constitutional recognition of First Peoples as the world’s longest continuing traditional culture would demonstrate that they possess a valued place in our national identity.

Reconciliation Queensland is active in supporting the “Journey to Recognition”: an epic relay across Australia building momentum to recognise Aboriginal and Torres Strait Islander peoples in the Constitution.

“The next thing the church can do is come in fully behind the constitutional reforms and to be very vocal about that,” says Peter.

“Christians should encourage fellow Australians, their families, their friends to get better understanding about what the constitutional changes are all about and to spread the word.”

“Unless we can get it down to that level of discussion with a whole range of people, people will not understand what we’re going in to vote about or have any interest in it, so we’ve got to get it to that level.”

Dennis Corowa also believes constitutional recognition will be an important next step in acknowledging the place of Aboriginal people as the First Peoples in the life of the nation, particularly on the international stage, but he isn’t holding his breath.

“It took 200 years before we were recognised as people—we were flora and fauna before that.”

Dennis thinks the church needs to encourage its people to engage with the issue and to speak to the government to help it along but that significant influence will also come from outside.

“Politicians know [constitutional reform] has to happen but the greater pressure is where Australia sits internationally because it’s an embarrassment to us in those forums,” he says.

Candace says she is “putting her foot down” and taking action, so she joined the “Journey to Recognition” road trip.

“Constitutional recognition is really important to me,” Candace says.

“I want my children’s future, and my nieces and nephews, and my grandchildren and my cousins and brothers and sisters to be recognised and be able to put this issue to bed once and for all that we are here and we are the First People, and we are custodians and we have a real sense of connection to this land.”

“Our history is one of their identity not being recognised—they weren’t people in this nation according to the colonisers and it wasn’t until Mabo that Terra Nullius was overturned,” he says.

“Through our own experience in developing our [Uniting Church Constitution] preamble over many, many years, the Uniting Church has some clear experience and ways of speaking into the discussion that’s in the broader Australian community at the moment.”

But Stuart believes that in the end reconciliation is about relationship.

“We can have all the programs and special events and all those kinds of things we like, but the real thing is about deepening relationship and mutuality.”

Stuart quotes Aboriginal leader Rev Dr Djiniyini Gondarra who said to him, “I’ve found things of value in your society that I value and have shaped me. True reconciliation will happen when you find things in my society that will transform you”.