Home > Features > Screw pretending: Be yourself 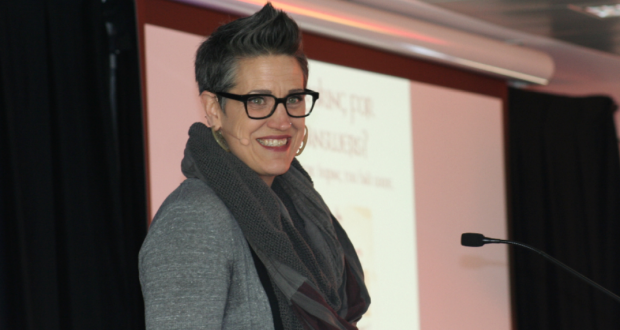 Screw pretending: Be yourself

You are who you are. Ashley Thompson speaks with New York Times bestselling author Rev Nadia Bolz-Weber about why Christians should be authentic and vulnerable. 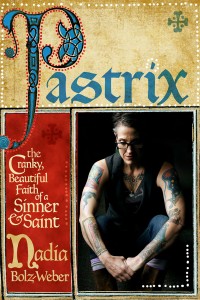 Pastrix: the Cranky, Beautiful Faith of a Sinner and Saint. RRP $22.00

Growing up in 1970s Denver, Colorado, Nadia’s fundamentalist Church of Christ upbringing both founded her strong ownership of the gospel while driving her to reject the way in which it was packaged. In a denomination where women were expected to be silent and submissive, Nadia’s snarky and assertive personality stood out.

“The gospel, the church, these hymns, all of them are mine,” says Nadia. “The really crappy way that was expressed—the narrow-minded, dualistic, us and- them, fundamentalist sectarian way that was presented to me in my youth—doesn’t mean that I have to walk away from the symbol system that formed me.”

This is her view now, almost 30 years after walking away from the church that burned her. In the intervening years she experimented with Wicca and became an alcoholic. She was also a stand-up comic.

Her spiritual memoir Pastrix: the Cranky, Beautiful Faith of a Sinner and Saint bluntly shares her “deeply faithful and deeply flawed” journey towards pastoring the faith community she wished she had growing up: House for All Sinners and Saints.

“This faith helped me get sober,” writes Nadia. “It helped me forgive the fundamentalism of my Church of Christ upbringing. And it helps me to not always have to be right.”

Between the ages of 12 and 16, Nadia was plagued with Graves’ disease, a thyroid-related autoimmune disorder. After corrective surgery, she started tattooing to reclaim her body. Not apologising for who she is or the space she takes up is central to her message.

“We’re not the default gender of it being okay to take up space on the planet. Any woman who has shared an airline seat with a man knows: women will tuck their arms in, they’ll fold their hands and they’ll take up as little space as they can but as soon as a man sits down he’ll take up as much space as he possibly can and neither of them are aware they they’re even doing it!”

Likewise, the Lutheran Church of Australia—who flew Nadia to Australia to speak at Faith Lutheran College in South Australia—does not ordain women or allow them to preach in church.

“I don’t really have an agenda about that,” says Nadia. “I don’t go in there with the thought that I’m going to be a rabble-rouser, that’s not my place. But at the same time I’m not going to apologise for who I am and I’m not going to avoid a question about women’s ordination if it comes up. I’m just going to be me.”

Nadia’s “me” is eccentric. Profiled by major media outlets around the world as “tall”, “tattooed” and “forthright” she is commonly singled out for her looks and by extension the assumption she is “progressive” or “liberal”.

“I don’t really fit those categories. I have progressive social views, like around gender and sexuality, but that’s not the same as being liberal theologically. So I am an orthodox Lutheran theologian who happens to be progressive socially,” says Nadia.

The tattoos that define her public appearance are, on closer inspection, extravagantly Christian. Depicting biblical narratives, Nadia embraces the opportunity they give her to talk about the gospel. When asked what they mean she replies, “Let me tell you about Jesus!”

“There are things about me that stand out. That people see first. But hopefully after they’re done with those things, they hear what I actually have to say.”

It’s this focus on substance that led to Nadia being keynote speaker at the UnitingWomen conference in Sydney in September. There she explained to 500 Uniting Church women that people still want tradition and good liturgy but the delivery system has changed.

“You have to be deeply rooted in tradition in order to innovate with integrity,” she says.

Often presumed to be anti-authoritarian, Nadia laughs: “Are you kidding? I’m the reason we have bishops!” She says she needs one to keep her in check. But Nadia believes that people want leaders who are the same in public and in private, leaders who don’t lie and leaders who are willing to admit to their mistakes.

“I’m anti bad authority. I’m not going to give someone my respect just because they have a title; they still have to be worthy of the respect.

“I think that for a long time we had this system where spiritual authority meant being the person who was the best at being a Christian … and we’re not interested in that anymore. I think we’re interested in people opening a space for us to have questions and to also have belief and community and the best way to do that is to have a leader who is also doing that, alongside everyone else.”

Showcasing a refreshing honesty about herself and the church, Nadia is vulnerable to her audience but also says she preaches from her scars, not wounds.

“The reason I’m so honest about my failings is not to point to myself but to create a space where hopefully the other person is invited into that truth about themselves also. Like, ‘Ok screw it, I’ll go first’,” she says.

“Honesty about our mistakes is important and makes us better leaders.”

House for All Sinners and Saints

Despite being a highly sought after international speaker, Nadia’s first commitments are to her family and parishioners. A collection of “soccer moms, drug addicts, pathological liars and corporate lawyers”, House reflects Nadia’s deep theological belief in inclusion and unconditional love.

“If I was in a nice little lady suit and pearls, the people who I interact with in my life probably wouldn’t interact with me. But it’s not like I got tattoos so that I could seem more relevant! It’s literally just who I am, those are just the places I hang out in naturally, it’s not contrived. So I have access to people most clergy probably wouldn’t and they have access to people I wouldn’t,” says Nadia.

Her unique calling to be the face of sarcastic, deeply faithful sinners everywhere is not one she lightly accepts, but she takes it on solely to testify to God’s grace, the overarching theme in her painfully honest memoir.

Locally, she pastors the faith community she herself would have loved to belong to and internationally, encourages Christians everywhere to be honest with who they truly are.

“Jesus meets us when our feet are dirty, not after we’ve cleaned them up and had a little pedicure for him,” she says.

“Screw pretending, it is finished. Amen.”

Listen to an interview with Nadia from the Radio National program, The Spirit of Things hosted by Dr Rachael Kohn.

Read more about Nadia Bolz-Weber in her book Pastrix: the Cranky, Beautiful Faith of a Sinner and Saint available at Trinity Theological Library.