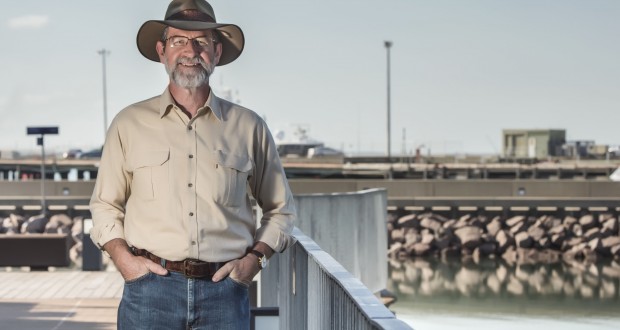 From 12 July Stuart McMillan will become president of the Uniting Church—only the third lay person to ever hold the position. Matt Pulford writes.

Stuart McMillan says he had a really good first week working for the Uniting Church in the Northern Territory. But the way that week started wasn’t promising.

Six weeks after being interviewed in Sydney for an accountant position at the Uniting Church Northern Synod, Stuart found himself standing alone with his swag on the edge of a dirt airstrip at Ramingining. No one got the message that he was coming. No one knew who he was, and more practically, no one was there to pick him up. So he hitched a ride into the community with some locals.

The year was 1982. Stuart was 27 years old. He and his wife Ros, a behavioural scientist, had taken the big decision to leave their comfortable community in Sydney’s suburban northwest to move to Darwin with their young family. Stuart and Ros had known for some time that they wanted to do something in their lives to make a difference in the world and to live up to their shared Christian faith.

Call of the north

Stuart remembers feeling a deep concern for Australia’s First Peoples from when he was in primary school in the 1960s. By the early 1980s Stuart and Ros were active in social justice issues at the former Chester St Congregational Church in Epping, and keenly followed news about Aboriginal land rights that would filter through from Darwin via Rev Jim Downing. From time to time Jim would send telegrams to his friends down south, urging them to advocate for various Aboriginal causes to their local members of parliament. After consideration and discernment, Stuart and Ros’s opportunity came when they spotted the Northern Synod’s job ad in the newspaper one Saturday.

Six weeks later, as he stepped off that deserted airstrip in the middle of Arnhem Land, Stuart began to live out his lifelong passion, and form his personal covenant—to use the modern Uniting Church expression—with the First Peoples of Australia.

“Things went well,” says Stuart, despite the initial logistic challenges. “My job was to work with Aboriginal bookkeepers so that we had a summary of monthly information for various businesses and operations. I learnt a lot that first week about the capacity of Aboriginal people to do things. Everything was in great shape. These people really knew what they were doing, and I’d been led to believe anecdotally that wasn’t the case. They were as good as any bookkeeper that ever worked for me in Sydney.”

Learning from the best

In the 33 years since, Stuart has had many roles: accountant, operations manager, general manager, pastor, cultural awareness trainer, resource worker, community developer and moderator of the Northern Synod. From 12 July 2015 he’ll add president of the Uniting Church in Australia to that list. He will be only the third lay person to serve as Uniting Church president; Sir Ronald Wilson and Dr Jill Tabart were the others. His path to the presidency has been uniquely informed by the lives of Australia’s First Peoples, particularly the Aboriginal people of northern Australia and members of the Uniting Aboriginal and Islander Christian Congress.

“My life has been so deeply enriched by Aboriginal people sharing their spirituality with me. I have been shaped by Aboriginal mentors. They have strengthened and shaped my faith,” says Stuart.

Stuart’s education about Aboriginal Australia has been a long journey. Ten years into his life in the Territory he was general manager of the Arnhem Land Progress Association (ALPA)—the largest employer of Aboriginal people in the NT with a turnover of around $20 million a year. But over time he realised that his inability to communicate with Aboriginal people in their own language was holding him back from deeper relationships. To the people he worked with he would always be bunggawa—the big boss—and a whitefella to boot. So he stood down as general manager and began an intensive course of study in the Yolŋu language.

The relationships that opened up from his language study led to a new level of spiritual connection. In due course the old men of Elcho Island sat down with Stuart in the dirt under the trees and schooled him in their law. A man he knew adopted him as his brother in the Gupapuyngu clan of the Yolŋu nation with the skin name bulany meaning red kangaroo. To complete the induction, the man’s wife adopted Ros as her sister to make sure Stuart and Ros’ relationship was proper in Yolŋu kinship terms. The intricacies and responsibilities of Aboriginal relationships across Arnhem Land and the traditions and taboos that came with them were now fully part of Stuart and Ros McMillan’s everyday lives.

“This meant maintaining protocols—such as not addressing or looking directly at Djiniyini’s wife—because in Yolŋu terms she’s a person with whom I’m in what’s called an avoidance relationship,” explains Stuart.

Stuart worked for Djiniyini Gondarra for 12 years through the heady days after the High Court’s Mabo decision established native title. Aboriginal and Islander groups all around the country were making their cases. This meant a lot of research for Stuart and trips to Canberra to resource Djiniyini and others as they gave their input on the drafting of the Native Title Act under Prime Minister Paul Keating.

While they were drawn ever deeper into Aboriginal Australia, the Uniting Church has remained a constant in the McMillans’ lives. After settling down at Humpty Doo on Darwin’s rural fringe, the McMillans joined with five other couples to set up a new congregation, the Humpty Doo Uniting Church, now the Living Water Uniting Church. After two ordained ministers in placement Stuart was recognised as pastor, presiding over weddings, funerals and “everything a normal ordained minister would”. Stuart and Ros both went on to hold senior leadership roles in the Northern Synod with Ros serving as moderator from 1996–99 and Stuart finishing an extended five-year term as moderator last month.

As a lay president Stuart’s role in worship will be slightly circumscribed. Under Uniting Church regulations he won’t be able to perform baptisms or preside over communion outside his synod without the authorisation of the host presbytery.

So what kind of leader will Stuart McMillan be for the whole Uniting Church? One who will work for a more inclusive, intercultural church across generations to bring about reconciliation and renewal for the whole creation.

“We are challenged to be a community of Christ, to bring that unity of Christ into play across the many different cultures in God’s church,” says Stuart.

“With our Indigenous brothers and sisters, the challenge remains for us to really listen to them and to the Spirit and to find ways to grow our relationship so that it becomes a truly interdependent one.

“I am energised by the way our next generation is embracing our diversity and applying their gifts and talents in leadership right across the Uniting Church.”

Whatever other challenges may lie ahead, Stuart McMillan is set to face them with patience, perseverance and a profound spirituality.