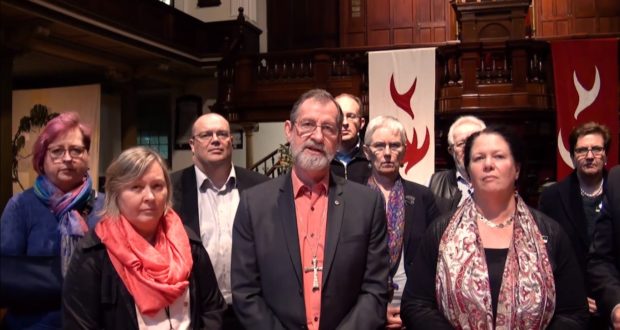 Uniting Church members are being called on to do their part to make our church, agencies and schools the safest they can be for children and all people in our care. Journey reports.

The Royal Commission on Child Sexual Abuse handed down its 17 volume report on 15 December 2017, bringing the landmark inquiry to a close after almost five years.

“The Royal Commission’s extensive body of work means we have a greater understanding about the nature of child sexual abuse now than we ever have in the past,” says Rev John Cox, Executive Officer of the Uniting Church’s National Royal Commission Task Group.

“We, alongside many other organisations and churches, have been challenged to address the issues that have been raised. What the Commission is saying to the whole community is that we need to learn some things and we need to be better, and this means all of us.

“To be a welcoming community of Christ that nurtures people in faith we have to ensure people’s safety. A commitment to making our churches safe for all people is a missional imperative as well as a moral one,” says John.

In a pastoral statement issued to coincide with the end of the Royal Commission, President Stuart McMillan said the church would reflect on recommendations, and implement measures to deliver the best quality of care, service and
support for children.

“Our church’s commitment is that we will seek to make amends,” said Stuart. “Our prayers and a determined focus will be required if we are to build a robust culture of child safety.”

At the Royal Commission’s final sitting, Chief Commissioner Justice Peter McClellan AM warned that the sexual abuse of children was not just a problem from the past.

“If the problems we have identified are to be adequately addressed, changes must be made. There must be changes in the culture, structure and governance practices of many institutions,” said Justice McClellan.

Stuart repeated his apology to those who had experienced abuse in the Uniting Church.

“I would again like to sincerely apologise to all children in our care who suffered sexual abuse in our church, whether it happened after our foundation in 1977 or before that, in our predecessor churches.”

Survivor groups have called for churches and other organisations that do not fully adopt the Royal Commission’s recommendations to have their charity status revoked.

The President’s Pastoral Statement includes prayers for Uniting Church members to mark the end of the Royal Commission in personal or corporate worship. Visit http://bit.ly/2GdO5Im

Discussing these issues can raise difficult emotions and past memories for some people. If you or someone you know needs help, please call: