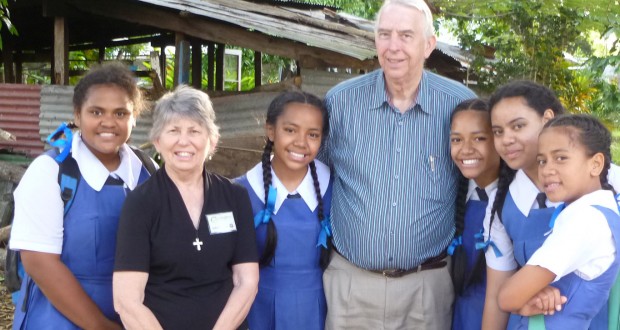 Judy and Alan with students of a Free Wesleyan Church School in Tonga. Photo: supplied

When Cyclone Ian ripped through the Pacific Island nation of Tonga on 11 January, Caloundra Uniting Church member Judy Morrison’s first thoughts were with her friends on Tongatapu, the southernmost island. Ashley Goetze reports.

While the category five storm left no dramatic structural damage on Tongatapu, the north island of Ha’apai, home to the Free Wesleyan Church school and kindergarten, was badly affected.

“Our friends at the Free Wesleyan Church on Tongatapu have been rallying to send goods to Ha’apai on the ferries because things like grocery stores have been ruined,” says Caloundra Uniting Church member Judy Morrison.

Over the past nine years Judy and her husband Alan have helped foster connections between Caloundra Uniting Church and the Free Wesleyan Church, through the help of UnitingWorld.

In that time they have led 17 members of the Caloundra congregation to Tonga on UnitingWorld InSolidarity trips, aimed to grow faith and strengthen partnerships.

“Another aspect of the InSolidarity trips is to help show where the needs are and that people can volunteer through UnitingWorld; that’s really important,” says Judy.

The personal connection the congregation has developed on their visits to Tonga was evident on the Sunday following the cyclone. Judy says she was besieged by people enquiring after their friends’ safety and well-being.

They gave money to Judy on the spot enabling her to send a total of $500 to the principal of Peteli Middle School, which has a special relationship with Unity College in Caloundra.

“The main thing for us is to expose people in Australia to a different culture, and to broaden their understanding of different cultures in the world and different experiences of Christianity at work,” says Judy.

UnitingWorld has since launched an official appeal nationwide to support the Free Wesleyan Church as they organise relief efforts, rebuild and care for affected communities.

“It’s an ongoing thing and we are really committed to working alongside them and helping them to develop their own future. Although there are times when you can give like this in emergencies,” says Judy.

Judy is an avid supporter of UnitingWorld, who organised the Morrison’s year-long stay in Tonga back in 2005.

“Our plan is to go again in August this year as we continue to support the kindergarten and other projects.”