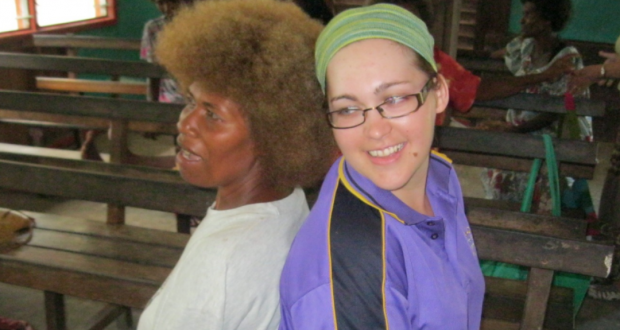 The United Church in Solomon Islands Guadalcanal Circuit and Beenleigh Regional Uniting Church in Logan have nothing much in common except a partnership which has been inspirational and transformative for both churches.

Stephen Haase first travelled with two others from Beenleigh to the remote village of Koleasi in the mountains of Guadalcanal in 2011. He says the partnership is all about mutuality. “It’s always been about that,” he said.

Eleven members of the Guadalcanal Circuit have visited the congregation at Beenleigh over the past three years and 18 members from Beenleigh have travelled to the Solomon Islands. Others who have not travelled have been engaged in hosting visitors and writing letters.

Stephen led the most recent visit to the villages of Kolosulu and Ao where the group carried their bags for four hours with eight river crossings to stay with local congregations.

Having previously participated in a UnitingWorld work party in Papua New Guinea, Stephen finds the partnership concept much more challenging. “It’s hard to get your head around it,” he said.

“I’m a sort of blokey kind of bloke and if you say it’s all about relationships it sounds a bit airy-fairy.

“I still get mates that say to me, ‘Are you going over there to build something?’ and I say ‘No. We’re just going to visit friends’.

The Guadalcanal Circuit has 15 congregations, most located in the rugged, mountainous interior of the Guadalcanal Island. Only three are accessible by road.

School teacher Kristy Coleman travelled to the villages of Kolosulu and Aola in 2012 and hopes to return to the Solomon Islands in 2015. Kristy described it as “a life-changing experience”.

“It opened my eyes to all the different ways people live and still worship the same God,” she said.

For Beenleigh Minister Rev Alan Robinson this long-term partnership has become an important part of the whole congregation’s life and work and has given people a bigger vision of what church is.

“One of the temptations for a place like Beenleigh is that you become pretty much enclosed in the region you’re familiar with and the way you go about doing things and take a lot of things for granted,” he said.

“It’s one thing to read in Journey about places overseas or the churches involved. But now, these are not just people in a photograph they are actually individuals whose names we know and whose children we learn about.”