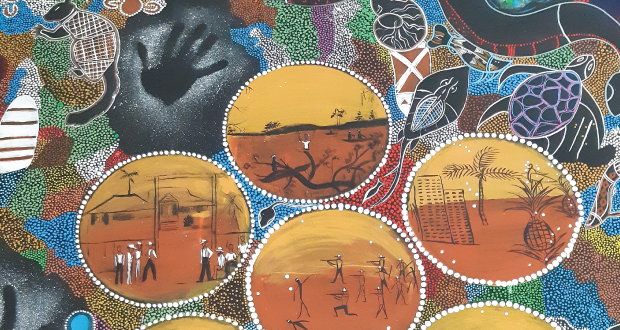 Uniting Church congregations, agencies and schools across Australia observed a Day of Mourning on or around 20 January at the request of the Uniting Aboriginal and Islander Christian Congress, endorsed by the 15th Assembly in 2018. Journey reports on the service held at Tewantin Uniting Church on the Sunshine Coast.

The Murdering Creek massacre at Yandina Station, as depicted in a painting by Sammy Ray Jones, was the focus of the Day of Mourning at Tewantin Uniting Church on 20 January.

Historical records reveal that almost 150 years ago, around May in 1869, the Yandina Station manager arranged for a station hand to lure local Indigenous people to the edge of what is now Lake Weyba, just south of Noosa. Seven men waited in hiding before firing on the Indigenous men who arrived in their canoes.

Revs Jenny and Neil Sims, who were invited to take the service by the local minister Rev Leonie Gaffel, report that the story and evocative painting brought the issues home to many worshippers.

“We were confronted with the need to mourn the suffering of the First Peoples of this nation through this painting—and this year marking the 150th anniversary of that massacre.”

The special liturgy used in the service was provided by the Uniting Church in Australia, with the preacher focusing on Micah 6:8, “What does the Lord ask of you but to do justice, to love kindness and to walk humbly with your God?”

Attendees learnt that the concept of a day of mourning has deep links to the Indigenous human rights struggle in the early-20th century.

“We heard that the first Day of Mourning of Aboriginal people in Australia was in Sydney in 1938,” say Jenny and Neil. “After this, from about 1940 to 1955, a number of churches observed an annual Day of Mourning for the Indigenous people of Australia.”

Neil adds, “I belong to a generation that was not told about the massacres as part of my education—and I think it is critical for the current generation to know the truth of our nation’s history.”