Home > National News > A Destiny Together: Justice for First Peoples 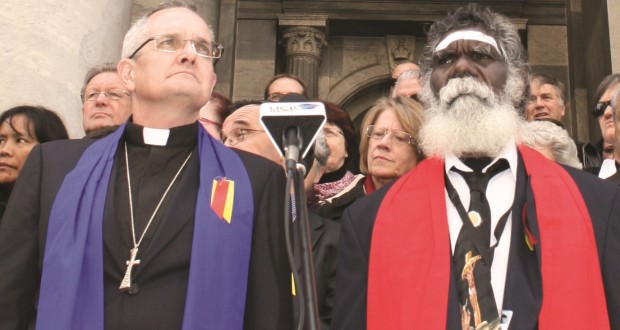 A Destiny Together: Justice for First Peoples

Uniting Church members are invited to engage in the Week of Prayer and Fasting for Justice for First Peoples, writes Jennifer Whyte.

One of the most poignant events of the 13th Assembly of the Uniting Church in 2012 was the silent walk of members through the streets of Adelaide to the South Australian Parliament. Prompted by the stories of anguish told by members of the Uniting Aboriginal and Islander Christian Congress (UAICC), the Assembly prayed and sang in grief at the effects of the Federal Government’s “Stronger Futures” laws.

Assembly also resolved to call the Uniting Church across the country to come together for a week of prayer and fasting for justice for First Peoples.

A Destiny Together, the theme for the week, is a phrase from the Uniting Church’s new preamble and speaks of the Church’s belief that we all share responsibility for building a reconciled nation.

It is an expression of hope that justice will prevail for Aboriginal and Torres Strait Islander peoples and a reflection of the Uniting Church’s commitment to bear witness to the genuine transformation of relationship that is possible though God’s love in Christ.

The heart of the week will be a nationwide movement of Uniting Church members, small groups and congregations exercising a daily practice of prayer, fasting and reflection. Presbyteries and congregations are being encouraged to plan local vigils during the week and special services on the Sunday.

On 18 March a public prayer vigil will be held on the lawns of Parliament House in Canberra, led by the Chair of the UAICC, Rev Rronang Garrawurra, and the President of the Uniting Church, Rev Dr Andrew Dutney. All Uniting Church members are invited to Canberra to be a part of this historic public witness to justice and reconciliation.

The Assembly, led by UnitingJustice working in partnership with UAICC, will provide a variety of resources for the week.