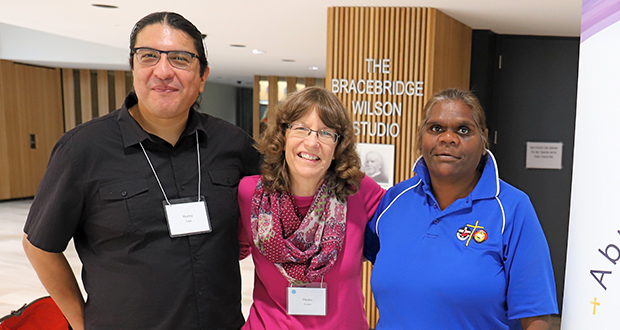 The 2018 Uniting Aboriginal and Islander Christian Congress (UAICC) National Conference saw participants from across Australia gather to reflect on the theme of healing and celebrate the Congress’ vision for the future. Journey reports.

Aboriginal and Islander members in the Uniting Church boosted resources for youth work, mission and evangelism at their triennial national conference held in Geelong over six days in January.

The UAICC will employ a full-time National President and a full-time youth worker for the next three years, to build on the strong work being done by young Indigenous church leaders in local communities around the country. The Congress also rang in a number of generational leadership changes, electing Rev Garry Dronfield to the new role of National President.

Garry is a Bundjalung man in placement at Sylvania Uniting Church in Sydney who served as Deputy Chairperson during on the previous National Executive. Garry has also been the Deputy Chair of the NSW–ACT UAICC Regional Council.

At his installation service Garry preached on Daniel 3:1–30, urging Congress members to stand firm in their faith and be confident in their belief in Jesus.

“Like Shadrach, Meshach and Abednego, let’s stand and be confident in what we believe,” said Garry.

“Don’t back off because this world’s going to keep putting up statues for us to worship.”

The President’s role will be supported by a full-time Resource Worker. Megan O’Connell who has held Policy Officer positions at the Aboriginal Health Council of SA and Uniting NSW/ACT was announced as the successful applicant for the position and will start the role in late February.

Longtime Interim National Coordinator Rev Dr Chris Budden will take up a part-time Training Coordinator role as he transitions towards the reward of retirement.

Outgoing National Chairperson Rev Dennis Corowa is also headed for retirement. He will remain an ex officio member of the National Executive as Chair of the Queensland Regional Committee.

At closing worship both received warm tributes for their decades of service to Congress, with Assembly President Stuart McMillan and General Secretary Colleen Geyer joining to pray for these two faithful servants.

The conference’s theme was “Trauma and Healing: Lessons from Canada” and keynote speaker Harley Eagle’s presentations on the trauma caused by colonisation led to powerful moments of sharing. Rev Denise Champion and Old Testament lecturer Rev Dr Liz Boase of Uniting College in Adelaide provided Bible Studies, with Rev Dr Boase guiding the Congress through the Book of Lamentations.

Anglican Wiradjuri man Rev Glenn Loughrey addressed the conference on the theme “Sovereignty and Treaty—It’s in Our Bodies.”

The incoming National Executive face a busy agenda with questions about membership, marriage, treaty and sovereignty slated for further discussion before the 15th Assembly.

All resources from the Conference will be posted on the UAICC National Conference web page in the coming weeks. To find out more, visit uaicc.org.au