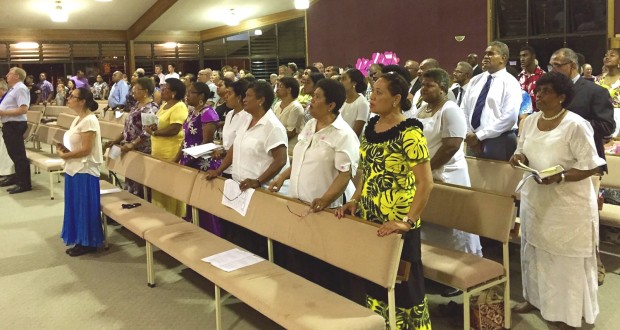 A pastoral service on 20 March at Broadwater Road Uniting Church in Brisbane for those affected by Cyclone Winston. Photo: David Busch

Fijian-Australians and Uniting Church congregations across Queensland have opened their hearts to communities in cyclone-devastated Fiji. Journey reports.

Fijian-Australians could only watch and wait over the weekend of 20 February as news filtered through about the impact of Fiji’s worst cyclone.

Particularly hard-hit by Cyclone Winston were the north and north western coast of Viti Levu, the south coast of Vanua Levu and maritime communities in the east and central regions. More than 40 people across Fiji were killed.

UnitingWorld partner the Methodist Church in Fiji (MCIF) is working with the national Disaster Management Council to coordinate relief and recovery.

“UnitingWorld in partnership with the MCIF will be supporting a ‘build back better’ approach to the longer term recovery effort.”

In addition to financial aid UnitingWorld has provided community recovery training for 55 people through a workshop organised by the MCIF in Suva in early March, led by Assembly national disaster recovery officer Rev Dr Stephen Robinson.

“There was a real hunger from the group to learn, and clearly a great need,” reports Stephen.

“About seven of those present have been heavily affected themselves and face returning to a very tough situation. One minister spoke of seven churches/villages in his area which were wiped out by the tidal surge of the cyclone.

“This will be a long, slow task ahead—particularly in the maritime areas where the level of loss, compounded by isolation is so profound.”

So far, the Synod has heard from 14 Queensland congregations that have responded to the UnitingWorld appeal. These include St Andrew’s in Mt Isa, which took part in a community event that raised $12 000, and the youth group at Northside Mackay which will donate the profit from their first scented Compassion candles sales.

Buderim Uniting Church donated $3701, and St Mark’s, Mt Gravatt will donate over $3000 from the proceeds of their garage sale. The Burdekin Uniting Church is donating funds for a generator for a village in Fiji. Many small congregations across the state have also responded generously.

A pastoral service on 20 March at Broadwater Road Uniting Church in Brisbane raised an offering of $3761 for the Cyclone Winston appeal.