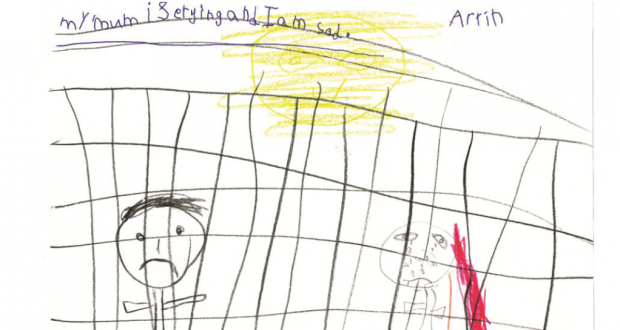 Drawing by Arrith, who was locked up in an off-shore detention centre. Source: Sarah Hanson-Young

The Uniting Church in Australia is calling for the immediate release of all children and their families from Australian-run immigration detention centres, following the publication of a shocking report by the Australian Human Rights Commission. Matt Pulford reports.

The Australian Human Rights Commission has released a damning report, entitled The Forgotten Children, on the largest survey of children in detention ever conducted anywhere in the world. It details brutal and damaging treatment on Nauru and Christmas Island. In the 15 months to March 2014 there were 233 recorded assaults involving children and 33 incidents of reported sexual assault.

“The level of mental distress and long-term harm suffered by children as a direct result of their detention is appalling. These children are losing the most important years for their growth and development and some will be scarred for life by their experiences.

“For the sake of the children, to protect them from further harm, the government must release the children and their families, including those from Nauru, into the community,” said Dr Dutney.

Rev Elenie Poulos, national director of UnitingJustice Australia says the findings of the report are a national disgrace.

“The report describes how children are woken every day at 11 pm and 5 am by guards shining a torch light in their faces as they conduct head counts. Children are being toilet trained in filthy conditions,” said Ms Poulos.

“On Christmas Island, families live in shipping containers with no room to sit or play. The children are surrounded by adults who themselves are suffering shockingly high rates of mental illness, including severe depression and post-traumatic stress disorder. Dozens of children with physical disabilities and mental illness have received inadequate care and 100 children on Christmas Island had no education for over one year. Over 30 per cent of children and parents interviewed described themselves as ‘always sad and crying’.

“A family in which both parents and their child are profoundly deaf were denied hearing aids for seven months, so the parents couldn’t hear the cries of their child,” said Ms Poulos.

“Australia is the only country in the world which imprisons children as the first, preferred option yet both the government and opposition have admitted that the imprisonment of children serves no deterrent purpose.

“These children and their families need to be released immediately,” said Ms Poulos.

The Uniting Church Assembly and synods have signed a joint statement calling for immediate action on the Australian Human Rights Commission report. Read the statement at tinyurl.com/jointngostatement