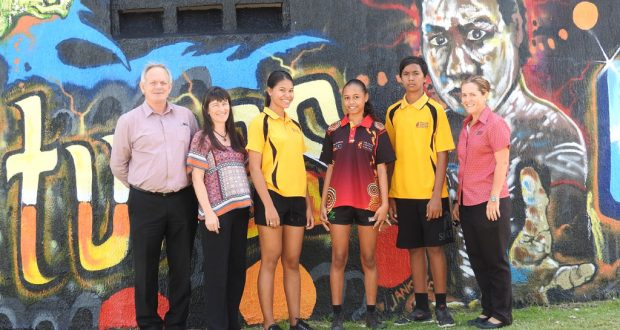 Uniting Church school Shalom Christian College has been in the news lately after participating in a recent Royal Commission public hearing. Mardi Lumsden discovers the school behind the headlines.

As the dust settles on another school year and a small group of students from Shalom Christian College in Townsville celebrate the end of Year 12, they may not realise the pride the staff at their school feel in this achievement.

“I get up every morning and know that I have changed someone’s life for the better,” he says.

Shalom Christian College is a prep to Year 12 co-ed day and boarding school in Townsville, opened in 1992 by the Uniting Aboriginal and Islander Christian Congress. Its vision is to empower Aboriginal and Torres Strait Islander students, to achieve positive futures through providing high quality education and real pathway opportunities.

In 2012 the then governing body, Congress Community Development and Education Unit (CCDEU), went into voluntary administration and requested the Queensland Synod of the Uniting Church to assume responsibility of the school and continue their vision.

While the primary school consistently has around 115 local students attending, around 70 per cent of the 190-odd senior school students are boarders. The number of senior students constantly fluctuates due to transport issues and responsibilities within community.

Shalom board chairperson (and former Synod Schools and Residential Colleges executive officer) Elaine Rae says Shalom is funded by a federal government recurrent grant based on the number of students and Abstudy, with additional funding from the state government and special programs.

Government funding is based on a ‘census day’ where students need to have been enrolled for a certain amount of time prior to that day.

“Because the students travel and because we are dependent on Centrelink organising the travel it makes it very difficult to ensure students are there on that particular day,” says Elaine.

In November, Shalom and the Queensland Synod were involved in the Royal Commission into Institutional Responses to Child Sexual Abuse public hearings looking at responses to children with problematic or harmful sexual behaviours in schools. The Commission heard about the school’s response to the sexual assault of a student by other students in 2006.

The Commission also held a panel specifically talking about the challenges facing students and boarding environments for Aboriginal and Torres Strait Islander students. These discussions were eye-opening for many of those listening, but for the staff at Shalom it was a day in the life of their community.

The Royal Commission heard that a number of students arrive at the school with sexually transmitted infections (STIs) as well as having experienced past abuse. Elaine says the board has been focused on improving the boarding experience and ensuring staff receive high quality training.

“The board has been working closely with the principal and the Synod to see if there are shortcomings that need to be addressed.”

She also says that the school would implement the Commission’s recommendations should any shortcomings be identified.

The school behind the headlines

The school’s motto—“Many cultures, one faith”—refers to the many Aboriginal and Torres Strait Islander cultures that make up the school.

Students at Shalom represent around 30 different language groups and come from as far away as Kintore, 500 kilometres west of Alice Springs. For 80 to 90 per cent of the boarding population English is not their first language; some students even speak up to four languages before English.

According to Chris England, around 80 per cent of the staff also identify as Aboriginal or Torres Strait Islander. This diversity is probably Shalom’s greatest strength, but also presents a number of challenges.

Chris has been principal since 2013 and says students who attend the whole way through senior school learn good coping mechanisms and an understanding of different cultures.

“Different communities have different social norms. One particular look from one would mean something else in another community and in another one it doesn’t mean anything at all.

“If we have students from Year Seven right through to Year 12, most of them turn out fine young men and women and they go on to do other things, to get jobs, further study, traineeships and some of them to university. If we have a student that comes in in Year 10 or 11 we don’t have time to do that.

“The quantity of needs of each of our students is the largest thing,” he says. “We have boarders who come with no toothbrushes,” he says.

Registrar Jodi McLean spoke of a boarder who was washing clothes every night until the house parents realised it was because she only had one uniform and one set of casual clothes.

“While we get paid the Abstudy funding for the boarding and tuition it doesn’t include them getting a bit of pocket money,” she says. “If they go shopping on the weekend there are kids that don’t have any money at all and kids that tend to have too much.”

Chris says there are health needs and emotional needs that need to be addressed.

“We have students who come with infections and skin irritations that need to be attended to.

“Twenty-five per cent of our students are in the care of the State because they have suffered trauma in the past. That trauma has formed their personalities and as a response their social skills at times can be considerably in need.

“Their educational needs are significant, particularly if they have come from community,” he says. “A student who is in Year Seven may well have a curriculum level of Year Two or Three.”

Consequently, the students at Shalom have individualised programs. Chris says in spite of many pressures staff turnover is low.

On any given day Sandy could be assisting a student in emergency need, organising counselling after a fight or managing the ongoing care of high needs students.

Sandy says at-school access to these services means that students’ health needs can be addressed in timely and supportive ways.

“There is a particular focus on ensuring the practices are culturally safe and that the students and their families are involved in decision making.

“Given the very remote communities that students may come from, there is not always good access to many of these health services in young people’s home communities, so having access whilst at Shalom is very important.”

Being on the Shalom board has exposed Elaine to a broader understanding of her own country, including visiting some of the remote communities students come from.

“I’ve learnt how little I knew about the struggles of Aboriginal and Torres Strait Islander people in Australia. I knew it in my head before, but now I know it in my heart.”

Ideas for the future

After nearly four years as registrar Jodi McLean remains full of ideas and passion for the school, its students and their communities.

“These students are coming from remote communities where it’s not normal for them to go to school every day for six and a half hours,” she says.

“When I go out and visit in communities, generally throughout the day you don’t see them much at school and all of a sudden the sun goes down, its cooler and they are out.

“Maybe we should be doing school at night time and during the day let them sleep?”

Jodi also mentioned a school in the Northern Territory that runs to six shorter terms per year, but noted that government funding would not cover the additional travel expenses. She says another issue is students missing school due to funerals and cultural ceremonies.

“If the elders aren’t passing it on to the generation of today then eventually their culture will die out.”

Messages for the church

There is no doubt that the past four years (through administration, active participation in the Royal Commission and the emotion and memories that that uncovers) have been challenging for staff at Shalom and those who support them. Chris thanks the church community for its continued support, prayer, finance “and its love for these children”.

“Shalom is an outreach of the Uniting Church and we would hope that the church continues to pray for that outreach—for staff, students, the communities—as the church reaches into the poorest and most needy sections of the Australian community.”

As board chairperson Elaine has a vision for the church’s relationship with this school.

“My vision is that our church would see Shalom as an opportunity to express our covenantal relationship with Aboriginal and Torres Strait Islander people. It is a real situation where we can walk alongside and share a vision but also invest in the next generation.”

Elaine says there are many ways congregations and individuals could support the school, from visiting, sharing the good news stories of Shalom or being part of a working bee to donating or providing funds for particular projects like travel to a team sport competition.

“The opportunities are only limited by people’s thinking but the first step would be engaging with the website and the most important thing is prayer.” 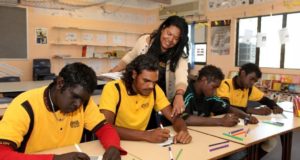 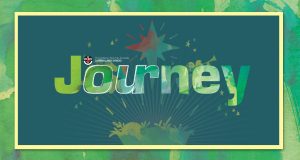 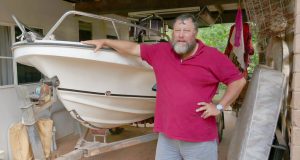