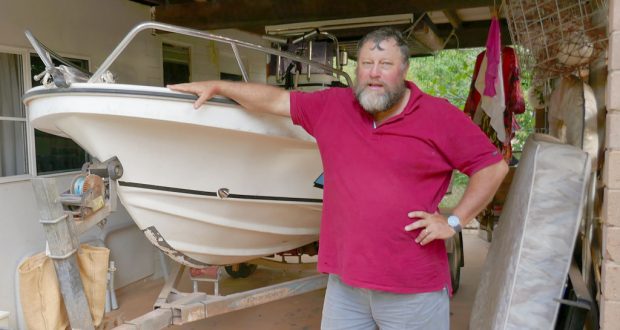 Rev Craig Mischewski began his ministry in a remote cattle camp in the Northern Territory, and he is still more than happy to leave the city lights behind. John Harrison talks to the new Uniting Church minister serving the isolated communities of western Cape York.

New Zealand-born Rev Craig Mischewski is a big man with a big heart and an even bigger parish. He’s a lifelong fisherman who, like Saint Peter before him, has turned into a fisher of men.

In Weipa, Craig is the Uniting Church minister in a dual placement with Calvary Presbytery and North Queensland Presbytery, serving the Anglican-Uniting cooperative congregation at St Luke’s. He also serves the Uniting Aboriginal and Islander Christian Congress congregations at Aurukun and Mapoon and, until the new minister arrives, Napranum.

“I love remote Australia: the more remote I go, the happier I am. I’m not good in towns and stuff like that,” says Craig, who first arrived in the Northern Territory in his twenties, working and living in bush camps with Aboriginal stockmen.

It was there, on a hill above a remote cattle camp on the edge of the Tanami desert, that he encountered God’s call to ministry.

Street work in Townsville followed, then ministry in Hughenden as a non-stipendiary agent. His ministerial training, including time at Trinity College Queensland in Brisbane, led to ordination and a placement at Tingalpa. Craig then spent a decade at Townsville Central, followed by five years as a patrol padre based in Hughenden.

When the patrol was wound up, it was as if his whole life had been in preparation for Western Cape York: his understanding of multiculturalism as a pakeha (white) Kiwi who spent time as an infantryman in the New Zealand Army, the roughing it in the stock camps of the Territory, his lifelong passion for fishing.

“I actually tried to get up here years before as a younger man with a young family and do the patrol. Dennis Robinson in his wisdom said, ‘No, you’ve got a young family, you’ll be out on patrol the whole time, you’ll never be home’. That was some 30 odd years ago,” says Craig.

“When the opportunity came to have Weipa and Mapoon together, I just jumped at it … it’s a stunning place—I love it.”

Sitting in the pews of St Luke’s one recent Sunday, the number of men in the congregation was notable. And young men too. Not a typical Uniting Church congregation.

The following day Craig was out in Albatross Bay fishing in his 60 horsepower boat.

The next day he was off to Mapoon, an hour to the north, by four-wheel-drive on a road mostly unsealed. It’s a community which has been much in the spotlight over the years, and the immediate challenge for the new Uniting Church minister is that there’s nowhere to set up shop.

“There’s no accommodation for me and there’s nowhere to hold Bible studies,” says Craig. “I run a service in the covered area of the school but I’ve got to travel one hour there and one hour back each time I go up there.”

Mapoon was originally a Presbyterian mission. When bauxite was discovered in the 1950s, the area became of interest to mining companies. With the cooperation of the church, the Queensland Government cut services to Mapoon, closing the community.

In November 1963 the government forcibly removed the remaining residents from their homes and burned the mission village. The old church building—the JG Ward Memorial Church built in memory of James Ward, the Moravian missionary who died of fever at Mapoon in 1895—was pulled down by the government in 1964.

Former residents eventually resettled in the area restoring their link with the land. In 1990, then Uniting Church president Sir Ronald Wilson apologised to the Mapoon community for the closure.

At last year’s National Assembly of the Uniting Church in Australia, the church committed itself to funding a new church at Mapoon.

“The people want their own ‘sacred space’ and they name it like that,” says Craig. “They want a spiritual place and so the Uniting Church has a responsibility, particularly given the history of what happened there, to provide that space. They recognise that as a community, they don’t feel like they have their soul until they’ve got their church. That’s very important to them, they have a very elevated perspective of that. That’s a big role that we play there.

“They particularly value work with their children, introducing their children to the Lord Jesus Christ, discipling them and giving them a moral framework.”

He adds, “I’m not going in there with an agenda. I’m there to loiter with intent.”

What makes Craig most proud of the Uniting Church?

“The Basis of Union, our constitution and our regulations,” he replies promptly. “That may sound really crazy but the Basis of Union is a profound theological document and the way in which we’ve structured ourselves is awesome because it’s a structure that empowers the local congregation but protects it … it empowers ministry but it protects it from abuses.

“The Uniting Church is just an amazing organisation and what I love is the breadth of understanding that can be accommodated in the Uniting Church. Our strength is our diversity plus we’ve got a great heritage of service, particularly community service. That’s something we can be really proud of.”