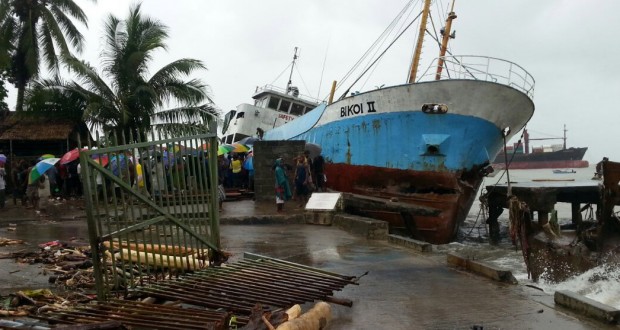 Church aid workers in the Solomon Islands are struggling to care for tens of thousands of people affected by deadly flooding in early April. Mardi Lumsden reports.

Flash floods tore through the Solomon Islands’ capital Honiara and the Guadalcanal Province on 4 April after days of torrential rain, strong winds and rough seas, leaving up to 50 000 people homeless and reliant on international aid for food and shelter.

“Quite a lot of people are still traumatised at the moment, because of the sudden impact of the loss of dearly loved members of the family and of the community,” Dr Bird told ABC Radio AM’s Brendan Trembath.

“The first step is, you know, basic needs; food, shelter, water, clothes,” he told AM.

Dr Bird said that amid a slow response from regional governments, local churches, including UnitingWorld partner church the United Church in Solomon Islands (UCSI), were playing an integral role in responding to the needs of affected communities, particularly the three UCSI congregations in the Honiara Circuit.

“All three congregations continue to cook dinner for three of the evacuation centres within Honiara. Funds for the meals are provided by the government and the congregations cook and serve dinner and hold evening prayers with the families in each of these centres. The total number of people in these three centres is between 800–850,” Dr Bird said on 16 April.

A 7.6 magnitude earthquake hit the Solomon Islands on 13 April and while there were no reports of significant damage, Greg Grimsich from the United Nations Office for the Coordination of Humanitarian Affairs, told ABC news the quake could distract aid efforts in the worst-hit flood areas.

“There’s been a lot of effort put into the humanitarian response for the flood victims, who remain in evacuation centres, and support for them to return to their home areas,” he said.

The Solomon Islands National Disaster Management Office says a key concern is controlling the spread of dysentery, malaria, dengue fever and other diseases related to poor sanitation and a lack of fresh water supplies.

Support UnitingWorld relief efforts in the Solomons by calling 1800 998 122 or visiting unitingworld.org.au