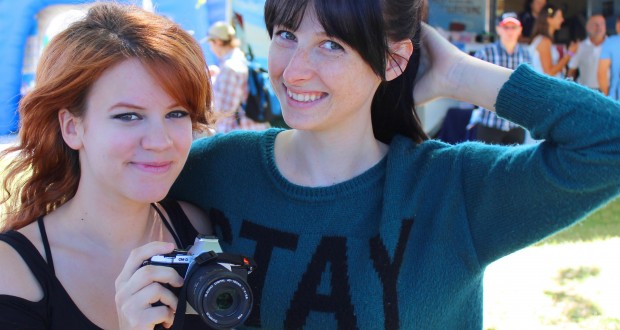 Shawna Howson and Tessa Violet were invited to speak at Easterfest in 2014. Photo: Rohan Salmond

In today’s rapidly changing media landscape, a new wave of writers, musicians and filmmakers are finding their voice and connecting with audiences in ways never seen before. Rohan Salmond spoke to Shawna Howson and Tessa Violet, a creative pair invited to speak and perform at Easterfest.

If you are an artist, you no longer need a studio or professional broadcast equipment to get your work seen. Now, almost anyone with an internet connection can use social media to make and distribute whatever they like without relying on traditional ways to connect with audiences.

“Social media is controlled by the user instead of a corporation,” says Shawna Howson, writer, poet and video maker from Ontario, Canada. “All kinds of art is being freely shared through the internet in ways that are rapidly changing and growing.”

Tessa Violet frequently collaborates with Shawna on her video content. Tessa lives in Nashville, Tennesse and is a musician with a rapidly growing fan base. Neither one of them took the traditional route to promote their work, instead opting to distribute and market their art via social media.

Before starting on YouTube they were completely unknown, but now together they distribute to nearly a million people, and their videos have been viewed more than 200 million times in total. In addition to touring around the United States, this year Tessa and Shawna were invited to appear at Easterfest, an arts festival in Toowoomba.

Creating things has always been a passion for both Shawna and Tessa. They are probably best known for making music videos and “vlogs”—video diary entries documenting their progress as they travel, or shoot on set. These smaller videos have taught them the skills to take on bigger and more complex projects.

“I started on YouTube when I was 17,” says Tessa. “At my high school you have to do a senior project to graduate—20 hours of work in a field of your choice. I was going to Hong Kong that summer and decided I would do a video blog to document it.

“My videos were so boring then; no one was watching but I loved doing it so much. So when I graduated high school I started vlogging almost weekly and that’s when it became a consistent creative outlet in my life.”

Shawna says making things is central to her identity. “Initially I didn’t make a decision to target a mainstream audience, I just made things because it is important for me as a person, and a Christian, to create things—that’s how I was made.

“I want to show young Christian artists that it’s okay to just create and to let God work in and through you without feeling the pressure to have every piece of art point directly to Christ.

“Art has intrinsic value; it isn’t just a portal for the gospel. Art is meant to convey truths, and because I believe the gospel is truth then it certainly bleeds through.

“Every piece of art isn’t about the ultimate truth (the gospel), and that’s okay, because we are creative beings who are meant to create all kinds of things for different purposes and for the glory of God, just like our creator.

“After several years, I’ve seen that making God-honouring content instead of God-specific content casts a much wider net in terms of who I can positively influence for Christ,” she says.

The new ways social media allows artists to interact with audiences has connected radically different people with each other, leading to changed lives.

“I think honesty in art is so important,” says Tessa. “Life is good and bad and it’s helpful to get to discuss both the light and the dark.

“It feels really good to get to be honest and vulnerable like that,” she says. “Christian or non-Christian, the human experience is a frustrating one and I think everyone can relate to that.”

Shawna and Tessa have also been impacted by this process of connection. Overt evangelism has never been part of either of their goals, but Shawna’s consistent, positive presence within her online community allowed barriers to be broken down for Tessa. The pair met on YouTube in 2008.

“I used to think Christians were all crazy or stupid,” says Tessa. “But when I met Shawna I thought, ‘Oh wow you’re so normal.’

“She’s just such a critical thinker and I kept meeting more and more Christians and they were all so creative and so interesting, so I started asking questions and that was the beginning of my journey toward Christ.”

The pair rarely make content with explicitly Christian messages, but they are well-known in their community for the matter-of-fact way they talk about their faith. From time to time they even hold informal Bible studies at conventions or stream them online.

“I’ve had such a positive response from my audience about my faith and the content I make and how it has helped them spiritually and emotionally,” says Shawna.

Because you’re worth it

Shawna and Tessa draw a diverse crowd, but they are especially popular with teenage girls.

“I’m really encouraged by the young women watching my content,” says Shawna. “Connecting with that demographic is all about honesty and sincerity; they’re a group that’s used to being sold to and they’re sick of it. I love that they identify with fresh, complex or strange ideas that they can feel challenged by or identify with.”

Tessa is especially enthusiastic about her viewers. “I’m a big fan of my female teenage audience,” she says. “I like to cheer for them and their mental health, and especially encouraging young women to be creative and find their worth in better things.”

Discussions about self-worth often come up in their vlogs and Q&A sessions; something both women feel strongly about.

“Lately I’ve been extra aware of the impulse to let my worth get tangled up in what I create. Sometimes I feel like if I write a really good song then that means I am really good. If I can’t come up with anything then I must not be very valuable.

“But Jesus tells us that we will succeed and fail, but those actions do not affect how incredibly valuable and loved we are by God. Our worth isn’t based in our actions but based in God alone.

“It’s really freeing to come back to that knowledge. It untangles me from the fear of failure—and the pride in success—and allows me to just make things for the enjoyment of making them.”

Despite attempts to move to the same city to work together on projects on a more permanent basis, Tessa and Shawna have struggled to obtain a Canadian or American work visa.

“Governments have little understanding or sympathy for independent creators in the arts, which means we’re currently living in different places,” says Shawna. “Luckily, we see each other every few months at conventions or on projects.

“Opportunities are starting to appear for us to travel and create together professionally, and we’re both looking forward to what comes of that. Tessa is enjoying pursuing music with all that she has at the moment and I am trying to do the same with film.

“It’s very scary and frustrating a lot of the time, but we’re both trusting that the Lord will take us where we need to be.”

Shawna Howson’s poetry anthology, Insomniatic Dreams is available at tinyurl.com/insomniaticdreams. Her videos can be found at youtube.com/nanalew

Tessa Violet’s first album, Maybe Trapped Mostly Troubled is available now via iTunes. Her videos can be found at youtube.com/meekakitty