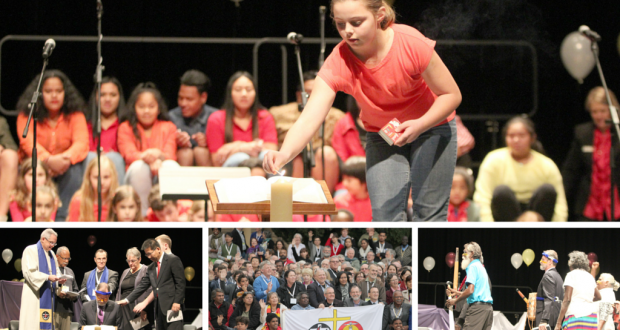 There are those within the Uniting Church who would deride the triennial Assembly gathering as a bit of talkfest.

And there really is a lot of talking. Over six days members deal with a range of issues, both of a social nature and of church polity: how the “church does church” and how it engages with is congregations, synods and other bodies.

But much is achieved and some of those truly special—most powerful—moments actually come in silence before God.

Such was the story of the 14th triennial Assembly in Perth last month.

The gathering tackled weighty subjects such as same-gender marriage, the role of elders within the Uniting Church, church governance, federal government cuts to overseas aid, the Royal Commission into Institutional Responses to Child Sexual Abuse, the treatment of those seeking asylum and federal and state government policies aimed at closing remote Aboriginal communities.

Stuart McMillan was installed as president of the Uniting Church Assembly in a service on the first day of the meeting, only the third lay person to hold that position in the church.

Children from the Synod of Western Australia sang the Assembly’s theme song, “Hearts on Fire” as Uniting Church members gathered for Stuart’s installation.

Stuart, who has lived and worked with Aboriginal people in the Northern Territory for more than 30 years, was presented to the Assembly by members of an Arnhem Land choir. Members of the Birrkili Gupapuyŋu nation, Stuart’s adoptive clan, had dressed him with traditional face paint and a dillybag, representing the constitution, law and title deeds to their land and waters, and their connection to the Creator.

A Yolŋu Matha speaker, Stuart opened his installation address with the words, “Bala limurr roŋyirr ŋorraŋgitjlil”—“Let us return to the white ashes of the fire” as an invitation to the Uniting Church members, both First and Second Peoples, to let the Holy Spirit rekindle the flame of God’s love so they can strive for a more just church and nation.

The most powerful moment of Assembly came on the Wednesday when Assembly members stood in silent respect for all those who have suffered from child abuse.

It came after chair of the Royal Commission into Institutional Responses to Child Sexual Abuse, Justice Peter McClellan had informed members that 399 of the 13 256 allegations within the commission’s terms of reference were in respect to abuse by members of Uniting Church institutions, representing about three per cent of the total figure.

Justice McClellan said the power of institutions must never again be allowed to silence a child, nor must it be allowed to diminish the preparedness or capacity of adults to act to protect children. Those representing the Uniting Church clearly endorsed that position, with Assembly president Stuart McMillan putting those who had suffered at the forefront of the church’s thinking.

“Their wellbeing and the opportunity for those people to be afforded justice, healing and perhaps with time some reconciliation [is our utmost concern],” said Stuart.

“His Honour [Justice McClellan] has outlined the changes in our society over a period in time when children were not to be seen or heard which allowed them to be quite vulnerable.

“Fortunately that has changed as the Christian community understands the value Jesus placed on children and we place that same value on the safety and welfare of children not only in our care but in our community.”

The Assembly has committed to continue to engage in a culturally-appropriate conversation about marriage and same-gender relationships, but did not change its position on marriage.

In addition to this conversation, the Assembly resolved to issue a pastoral letter to the church affirming the Uniting Church as an inclusive church embracing those members who identify as lesbian, gay, bisexual, trans, intersex and queer (LGBTIQ).

If a change to the Marriage Act is made between now and the next Assembly in 2018, the Assembly general secretary will issue a letter to all Uniting Church celebrants advising them that they are not required to celebrate any marriage for any reason, and in their church-authorised role must continue to use the Uniting Church marriage rite.

Members were encouraged by UnitingWorld to advocate strongly for increases in government aid funding and to increase their own support for development aid through personal and church giving, and through advocacy and encouragement of their friends and community.

It followed a massive cut in overseas aid by the federal government in the May budget which will slice $2.7 billion from the forward estimates over the next few years.

Church says “No!” to community closures

The gathering stood as one to oppose the forced closure of remote Aboriginal communities.

The symbolic action was the result of a heartfelt plea by a contingent of youthful members who implored the Assembly to respond to the potential closures.

All members, including the president Stuart McMillan, Nyungar elder Rev Sealin Garlett and Uniting Aboriginal and Islander Christian Congress chairperson Rev Dennis Corowa moved outside the hall to signal their solidarity with Indigenous people in threat of being forced off their land by federal and state government policies.

The Assembly also demanded the Australian Government adopt policies which genuinely support, rather than demonise, asylum seekers and refugees.

In adopting a proposal from UnitingJustice the Assembly outlined a nine-step plan to achieve this goal which included calling for the human rights of asylum seekers and refugees to be upheld at all times and an abandonment of the policy of mandatory detention.

A church from the margins

While at last national census only five per cent of Australians identified themselves as being Uniting Church compared to 14 per cent regarding themselves as Presbyterian, Congregational and Methodist in 1976, members were encouraged not to see being on the margin of society as necessarily a bad thing.

The associate general secretary of the China Christian Council, Rev Dr Lin Manhong, argued that Jesus Christ was the marginal person “par excellence”.  He was born in a lowly stable, was considered an outsider by his own and befriended those on the edge of society—such as Zaccheus the tax collector, the sick, the poor and the woman at the well.

“If Jesus Christ, the incarnated God, was a marginal person, we Christians are definitely called to be the marginal people of God.

“When the church is in a position of being at the margin, it will be more likely to be like Jesus Christ to relate to and embrace those who are marginalised, because the church itself is one of them, as Jesus Christ was,” she said.

“It will be more likely for the church to join the voices from the margins and not just to listen to and speak for them from a distant, central and privileged position.

“It will be more likely for the church to be a more active agent of missionary activities to counteract injustice, inequality and exclusivity that have kept people at the margins.

“It will be more likely for the church to remember its original nature and what it ought to be.”

Being more willing to look for change and renewal in the church was another positive which came from being on the margin of society.

Deidre is currently the moderator of the Synod of South Australia and a member of number of Uniting Church working groups and committees.

Addressing the Assembly, Deidre thanked members for entrusting her with the responsibility of leading the Uniting Church.

“It gives me great pleasure to be serving you as president-elect,” she said.

“I promise to listen to the Holy Spirit, and allow myself to be shaped and empowered by the Spirit.”

She also paid tribute to Dr Jill Tabart, the first woman president in the Uniting Church.

“It is an honour for me to walk in her footsteps,” said Deidre.

The Assembly came to a close with a service of Holy Communion presided over by Uniting Aboriginal and Islander Christian Congress chairperson Rev Dennis Corowa and assisted by Stuart McMillan.

Stuart sent the members of Assembly into the next triennium with a charge to continue the process of reconciliation between all people.

“People of God, go forth from here to live out the covenant that we the First and Second Peoples of this land have entered into with one another,” he said.

“Rejoice in the richness of our diverse cultures and learn from them.

“Celebrate the unity we have in Jesus.”

The next Assembly will be held in Melbourne in 2018. 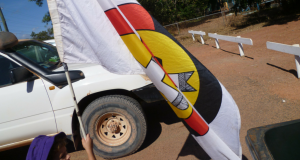 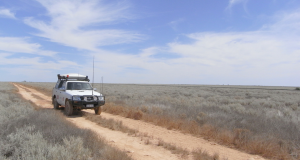