Home > Features > Let them stay with us 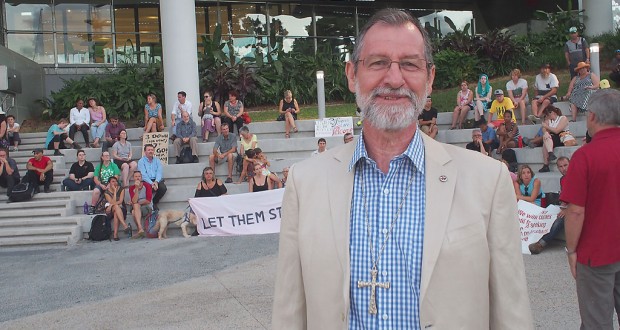 Churches across the country grabbed headlines around the world last month by offering sanctuary to 267 asylum seekers threatened with deportation to Nauru. What does it mean, and why did they do it? Rohan Salmond reports.

Baby Asha had no idea the problem she was causing the Australian government.

Asha was a healthy one-year-old baby—fully recovered from burns accidentally sustained in detention on Nauru—but her doctors at Lady Cilento Children’s Hospital, fearing for her health if she returned to Nauru, refused to discharge her. And so Asha stayed in the hospital just beyond the grasp of the immigration department, unaware of the federal police cars circling the building outside.

Days before, the High Court ruled that the laws which make possible Australia’s offshore detention centres in foreign countries are legally and constitutionally valid. As a result of the decision, baby Asha was among 267 asylum seekers facing imminent deportation to Nauru.

There was community outcry. Lawyers, comedians, artists, trade unions, doctors and religious leaders spoke out against deporting the asylum seeker families. A rash of churches across the country flung open their doors declaring themselves to be places of sanctuary to the 267 people at risk of return to Nauru.

More than 80 congregations across the Anglican, Baptist, Pentecostal, Salvation Army, Quaker, Unitarian and Uniting churches, plus two orders of Catholic nuns and one mosque have registered as places of sanctuary—all adamant the families must stay. It’s the kind of coordinated religious civil disobedience Australia hasn’t seen since the Vietnam War. How did we get here?

We will protect you

In medieval Europe, if a person ran afoul of the government, they could flee to a church and claim sanctuary. It was recognition that there were some places secular authority could not reach.

Rev Elenie Poulos is national director of UnitingJustice, the advocacy and social justice unit of the Uniting Church Assembly.

“Sanctuary is a really longstanding tradition that is connected to places of faith and worship,” she says.

“More recently churches in the US and in Canada have drawn on the concept of sanctuary, particularly around illegal immigrants but also in the US around the time of the Vietnam War where churches gave sanctuary to people who were resisting conscription because they were contentious objectors.”

There’s one problem: The concept of religious sanctuary was abolished from English law in 1623 and has no legal foundation in Australia. Anyone providing sanctuary to an asylum seeker risks ten years prison.

“An offer of sanctuary to people who are subject to deportation is a crime according to the Migration Act,” says Elenie. “It is a very serious act of civil disobedience and it relies on federal statutes, so it’s a federal crime.

“Christian churches have a long history of civil disobedience. It’s sadly not always the case that the laws of the land are just laws.”

One person running the risk of prosecution is Rev Yvonne McRostie, minister with Stafford Uniting Church—the first Uniting Church in Queensland to register as a place of sanctuary.

“We did it out of a sense of frustration with the bipartisan support from both Labor and Liberal federal parties, the major parties, to do offshore detention,” she says.

“It is the right thing to do. We have a gospel imperative to stand so people are treated justly. The doctors and nurses and United Nations officials are starting to say something and if we’re not standing up and saying something too, then we’re just as bad as everyone else. So we need to do this.”

“One of the amazing things about what’s happened recently is the whole world is watching us, it has grabbed headlines around the world,” says Elenie. “This is a chance to show the world we’re better than this.”

Immigration is a thorny policy area. It comprises a nest of moral quandaries, complicated even further by diplomatic tensions and the pressure of the electoral cycle. No single political party can lay claim to Australia’s current asylum seeker policy. It was the Keating Government which introduced mandatory, potentially indefinite detention into Australian law in 1992. In 2001, in response to asylum seekers drowning at sea, the policy was expanded, with Labor’s support, by the Howard Government with the implementation of the Pacific Solution—sending all maritime arrivals for processing on Christmas Island, Nauru and Manus Island in Papua New Guinea.

Under the current policy, Operation Sovereign Borders, there is a “zero tolerance” approach towards illegal boat arrivals. The Abbott Government followed through with Kevin Rudd’s commitment that nobody arriving in Australia by boat without a visa would be resettled in the country, even if they are found to be a genuine refugee. This has left some refugees stranded in Nauru and PNG, unable to return home, yet unable to be resettled in Australia. New Zealand has offered to take refugees from Australian offshore detention centres but it’s an offer the government has so far refused.

The Uniting Church has been a longtime critic of the Australian Government’s offshore detention policy.

“What we have both on Manus and Nauru is the arbitrary and indefinite detention of people,” says Elenie.

“We have people who have not done anything illegal imprisoned without hope of release. They have engaged their right to seek protection, to seek asylum, they’ve fled situations of persecution and violence in fear for their lives and they have a right to do that.”

Do the ends justify the means?

Both Labor and the Coalition insist the policy, while harsh, is necessary to prevent vulnerable people from taking the risky sea journey to Australia. People smugglers, they argue, are taking advantage of asylum seekers, leading to deaths at sea. The only way to protect people is to deter them from making the journey in the first place.

Yvonne acknowledges the complexity of the issue. “There aren’t any easy answers,” she says.

“I just feel we could have done something different before resorting to offshore processing and we can be processing people a lot quicker.

“We’re punishing innocent people for the crimes of other people. It seems wrong.”

“It’s a ludicrous claim to say that these people, including babies and children, have to continue to suffer and give up their lives in order to deter the boats,” she says.

“When this group of people includes women who have been raped and young children, children of primary school age who are so desperate that they have tried
to commit suicide, it’s not acceptable.”

She says while boat turnbacks have curbed the number of asylum seekers arriving in Australian waters, there’s no guarantee this measure protects people either.

“The boats haven’t stopped. The boats are still coming, they’re just not getting to Australia, and in fact we don’t know if people have stopped drowning.

“We’ve got 37 babies that have been born in this country but we won’t give them Australian citizenship, but we will send them back to Nauru which we know, and even the government’s own reports have shown, is a completely unsuitable place for people. The conditions there cause a great deal of harm to people’s wellbeing.”

First, do no harm

Lobbying in parliament continues, but there seems to be no appetite for change in Canberra.

“The church has been engaging in the public space and with successive governments on this matter for a very, very long time and we’ve seen no willingness to substantially change the policy,” says Elenie.

Stafford Uniting Church’s offer of sanctuary has come after a lengthy process of lobbying Wayne Swan, the local member of parliament. Yvonne feels they have no other option but to potentially break the law.

“It’s not something you do lightly but it’s something that you have to sometimes do when you just don’t have a choice. We feel like there’s no other choice,” she says.

It’s unclear if any of the 267 asylum seekers will accept the offer of sanctuary. Some may be concerned that accepting the offer will have a negative impact on their applications for refugee status.

In a pastoral statement, Uniting Church president Stuart McMillan says the church is working with the Australian Churches Refugee Taskforce to ensure that offering sanctuary will not cause harm.

“Our first priority is to ensure that nothing we do has harmful consequences for those people seeking asylum. We are also working to gain clarity about the legal issues involved in offering sanctuary and will keep in close contact with the congregations most likely to have the offer accepted,” he says.

Elenie is proud to support the congregations offering sanctuary, and continues to advocate for a positive regional solution for refugees and people seeking asylum.

“I think the church response to the sanctuary movement has just been a wonderful witness to the love of God in our world. The church believes that every person is precious and valuable and government policies shouldn’t cause harm.

“The solution that the Australian government needs to be putting time and energy into is to work constructively in the region to develop frameworks that allows people to feel safe where they are: a genuine regional system of refugee protection where people’s claims can be processed quickly and where they know there is a future for them somewhere.”

art.com.au/sanctuary-for-asylum-seekers
If your congregation is thinking of offering sanctuary (now or in the future) please contact David Munro, Queensland Synod risk and insurance manager, on 3377 9777 for more information. 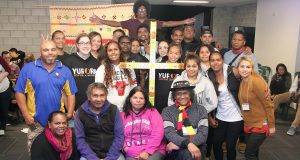 Diversity on show at NYALC