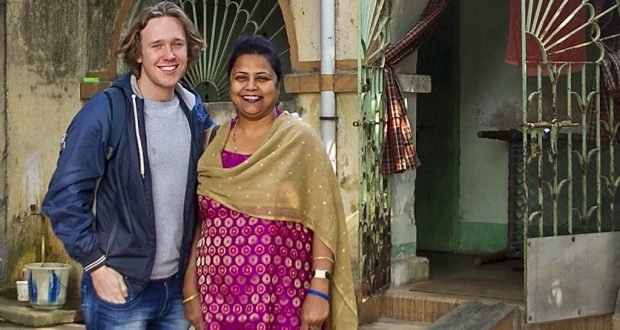 Dr Livingstone, I presume? Forget images of formally clad white missionaries venturing into deepest Africa, the modern missionary could be easily mistaken for a local as they blend seamlessly into the culture of their hosts. Dianne Jensen reports.

Anyone from a student to a mid-life professional to a retired tradie can become a missionary with UnitingWorld, the overseas relief and development agency of the National Assembly of the Uniting Church in Australia. All they need is a sense of adventure, a love of God and a willingness to share their skills with others.

Laura McGilvray, program manager (Experience Volunteers and India programs) at UnitingWorld, says that the contemporary understanding of overseas mission reflects the huge socio-political upheavals which have transformed the contemporary world.

“One hundred, 200 years ago there were lots of missionaries going out into the overseas context spreading the gospel and setting up local churches,” says Laura. “That was really valuable work and a lot of the partnerships we have today started through those connections, particularly in the Pacific where we have long-lasting partnerships”.

UnitingWorld has partnerships in Africa, Asia and the Pacific with Methodist, Presbyterian, Congregational and United churches, alongside newer partnerships such as those in China and South Sudan.

“Today the concept of mission has changed to recognising that God is working through these churches and that we can connect with and build the capacity of those churches and people to share the gospel in their own context,” says Laura. “All of the volunteer placements (and we use ‘volunteer’ and ‘missionary’ interchangeably) are working with those local churches and organisations, recognising that that church and those people are really the experts in that context.”

Through UnitingWorld’s Experience volunteer program, people from across Australia spend anything from a few weeks to six months living and working with overseas communities. The tasks and locations are diverse, from teaching carpentry in Kiribati to financial management with the Methodist Church in Zimbabwe.

Brisbane student Alex Baker first heard about the program at church and was sufficiently intrigued to follow up with UnitingWorld.

Alex was offered a placement as a teacher at Goldie College in the Solomon Islands, returning the following year as well as undertaking a hostel assistant/tutor role for the Diocese of Durgapur (Church of North India) at the end of 2014.

“I love being in the developing world,” he says. “There is a certain type of raw energy about it, particularly in India. There have been situations on placement that have been personally confronting, in which you witness poverty first-hand that you couldn’t imagine before. But this is the reason that NGOs like UnitingWorld work with these partners to set up programs that address issues such as poverty, health and education.”

Particularly important for Alex is the fact that everything he does is at the behest of the partner churches and organisations.

“The great thing about UnitingWorld’s Experience program is that the programs that are advertised and offered are constructed in the best interests of the overseas partners. The placements on offer are designed to be productive for them, with the idea of assisting in areas in which they see a need and helping to grow their capacity.”

Off the beaten track

Retirees Sylvia and Don Wright from the Capricorn Coast near Yeppoon, outside Rockhampton, have recently relocated to Hervey Bay. They downsized to free up their time and resources and have travelled far and wide as UnitingWorld volunteers.

A former TAFE teacher, Sylvia connected with UnitingWorld in 2009, working first in Tonga. When Don—an architectural draftsman—retired along with Sylvia in 2010, the couple decided that the time was ripe to do something different with their lives.

“Early 2011 we had a call from UnitingWorld asking us to coordinate the Orphans and Vulnerable Children project in Western Zambia, Africa for three months and so we agreed to that. There have been lots of things happening like that, and almost every year something pops up,” says Sylvia.

“I’ve had a second placement in Tonga, and we also took our own InSolidarity (short-term visit) group to Zambia in 2013 with a group of seven volunteers. We’ve also been to Bethany Home for the disabled in Perak, Malaysia a couple of times where UnitingWorld has a connection.

“Over the last five or six years, most years we’ll find a placement where we are needed and we’ve kept up that flexibility about our life … we can pick up sticks here, we can be gone within a month.”

The Wrights joke that their CVs don’t represent anything like their current work life.

“We have become jacks-of-all-trades,” says Sylvia. “It’s just a matter of stepping outside your comfort zone and saying ‘yes’ to everything—I’ll have a go at that … you’re not there just trying to turn stones over because sometimes the stones don’t turn very quickly at all in other cultures, but to link with people. It’s also the fact that we have a great love of God and those communities that we join with also have that.”

Laura McGilvray says that the short-term nature of volunteer placements is important.

“We are not sending people over to fill a role, but to build the capacity of the church to do what it does. A lot of that is skills transfer—the phrase that is used in development is ‘capacity building’ and it’s also a more sustainable way of working,” she says.

“If you have a person in a role, even if they are working as a teacher for a couple of years in a school, unless they are training up other teachers or assisting the school or the education system to up-skill or improve the way that they work, once that volunteer comes home, while they’ve probably done fantastic work in those two years, not a lot has changed by the time they come home.

“The focus for our placements is for them to be working alongside, to be strengthening the church, institution or organisation so that when they come home that work can continue within that organisation.”

Many older Uniting Church members have warm memories of those who devoted their lives to missionary service, often at great personal cost. Does that same call to leave home and family to spread the gospel continue to resound in this millennium?

“It is still relevant, there’s just a bit more to it,” says Laura. “I think there’s a call to use your gifts and skills in different ways and in different places, and a lot of our volunteers feel the call—that the church is not just their own congregation or even the Uniting Church in Australia, that the boundaries of the church are not national borders, and that we are part of a global church.”

“Amen, it is!” says Alex Baker. “We live a very content life in Australia and as a church (and society as a whole) we have become too comfortable in our own skin. The call to spread God’s love is something that can’t be done by just preaching the word inside the four walls, but by serving others outside those walls, whether that be overseas or at home.”