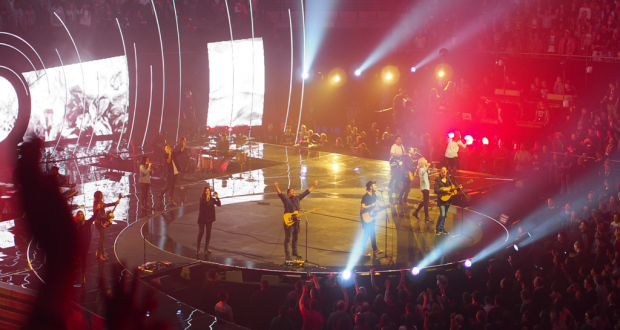 Google suggestions don’t lie. So if popular opinion is calling out Christian movies and music as the “enemy of quality”, “intellectually vacant” and “disconnected from reality” what value does it hold in a world already full of hopeless content? Ashley Thompson explores.

Christians in media are stuck between a rock and a hard place—damned if they do, damned if they don’t. The tension between a Christian’s faith and their work is evident is every industry but is perhaps nowhere as pronounced or scrutinised as on a public platform.

“I don’t think people need to be overt; but I admire those in public life who identify intentionally as people of faith. What is important is authenticity,” says professional communicator and Uniting Church member, Dr John Harrison.

“I would like to see people of faith producing authentic media which reflects that faith in the many diverse ways it can.”

Today, the highly sought after Christian target market is in no way lacking content churned out by omnipresent media conglomerates Time Warner and Sony Pictures.

Old Fashioned, God’s Not Dead, Persecuted, Heaven Is For Real: last year alone Hollywood Christians spat out lacklustre movies which were reviewed as weak responses to current issues. Online Christian resource group the Gospel Coalition described them as “inherently dishonest” and “egotistic castle-building”. Their key offence was identified as an indulgence that projects Christians into the most admirable and ethical characters, without flaw.

Concurrently in 2014, Son of God, Exodus: Gods and Kings and Noah initiated a wave of biblical epics that will continue to dominate our screens in upcoming releases: Apostle Paul, David and Goliath, and Killing Jesus.

In a guest post on Vox.com titled “Why are Christian movies so painfully bad?” Brandon Ambrosino wrote that much of Christian media seems like a knock-off: a cheap alternative that runs contradictory to the doctrine of creation—as artists choose to mimic someone else’s vision, rather than cultivate their own.

Others suggest that Christians cocoon themselves within cultural walls—producing out-of-date content that perpetuates an idealistic fantasy world rather than the one in which we actually live.

So if our mission is to reach beyond church walls and affect the mainstream, how and why are we failing so badly?

What’s in a name?

“I think that there is a problem with the terminology that can frame this conversation. What makes something Christian? Does a car become Christian when we slap a Jesus sticker on the bumper?” asks Australian Christian Channel (ACCTV) general manager, Geoff Bentley.

According to Geoff, of the more than 4500 movies made last year—only 90 movies were major releases in cinemas (films grossing in excess of $70 million at the box office). Of these he is aware of at least six that were written by Christians, or based on a biblical world view, although not necessarily marketed as such.

“It may appear that there is a plethora of poorly- made films in the Christian genre but I wonder if labelling films as ‘Christian movies’ is like the ‘Christian’ sticker on a car—it gives the perception that the reason it’s a bad movie is because it is ‘Christian’, not because it was poorly made or written,” says Geoff.

“I can’t help but feel that as Christians we, to some extent, are to blame for this perception; as we tend to focus on championing the Christian brand despite the integrity of the product under which we place the brand, falling far short of the God we want to be honouring.”

Geoff believes excellence is achieved when artists strive to close the gap between an extraordinary vision and their ability to execute it.

Contemporary music labelled under the genre “Christian” is criticised as insular and completely foreign to secular audiences. Whether it’s pop, soft rock or worship, writers and commenters on religious blogging site Patheos.com describe this music as “cheesy” and “limited” noting it “all sounds the same”.

“Much music under the banner of ‘Christian’ is rubbish replete with ‘Jesus is my boyfriend’ type lyrics,” says John Harrison.

“We need to remember that much of it comes from the conservative American Christian publishing, media and music industry; an industry which does not wish to challenge Christian consumerism.”

Hillsong-affiliated bands are undeniably popular. Young & Free and Hillsong Worship frequently chart on Christian and mainstream bestseller lists, as does Hillsong United, which has received acclaim both at home and abroad. Their latest album Empires hit number one on the 2015 ARIA chart and their song “Oceans (Where Feet May Fail)” set a new record for longest reign on Billboard’s Hot Christian Songs chart.

According to Brian and Hillsong United member Jonathon “JD” Douglass, the ten members that take that stage are first and foremost “members of the church” and “lovers of Jesus”.

“Everything that you see of United comes out of the heart of a local church; they never ever cut those roots,” says Brian.

“The [gospel] message is eternal and we don’t want to touch what the message is but the method completely needs to change and be relevant to society.

“I just think that we need to present that in a way that people can understand and that is covered in grace not law.”

“The world’s changing dramatically around us,” concurs Brian, “Even from last week to this week, it’s changed. A month ago we’ve never even heard of [social media app] Periscope and now it’s the latest and greatest thing; so I feel like unless us older people sometimes get out of the way and give young people room to do things differently, and have creativity, we really will hold back potential.”

Both the Hillsong team and Geoff Bentley believe it is impossible to separate faith and work as their relationship with God frames the lens through which they view the world.

“In my understanding of faith in God, I cannot separate my faith from who I am and all that I do. My faith in God should be the framework from which everything I do is based,” says Geoff, “But it lacks integrity if we do a poor job and ascribe [media] high value just because we have faith or label it as Christian work.

“The temptation is to try to make God famous or defend our Christian position and in doing so we can end up embellishing our faith stories beyond reality. We need to let God do the promoting; he will defend our position when we just keep it real.”

Online critics suggest we stop producing “Christian movies” or “Christian music” and simply have “Christ-followers who create great art”. Put another way, American college professor and artist Gary Wilson says, “What the world doesn’t need are more Christian artists, what we need are more artists who have their Christianity intact”.

John Harrison agrees, “All media can do is challenge and ask questions. I’m sufficiently old fashioned to believe the rest is up to God.”

Hillsong United’s latest album Empires can be purchased through the Apple iTunes store.

John Harrison will be the keynote speaker at the annual Australasian Religious Press Association conference in Brisbane on 28–30 August speaking on the theme, Against the murderous, thieving hordes—freedom, religion and the press. 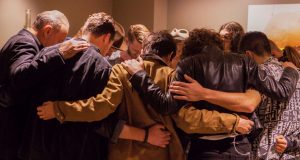 Behind the soundtrack to your faith