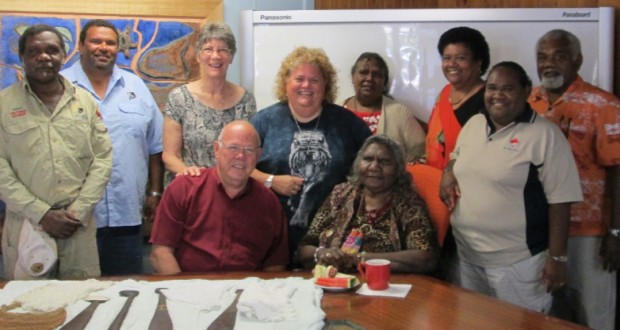 The return of irreplaceable artefacts to the Weipa community has been welcomed by the descendants of Old Weipa Mission. Brooke Prentis reports.

Four woomeras, a dilly bag and some pieces of lacework taken from Old Weipa Mission have been returned to the Weipa community by grandchildren of the missionaries who worked there almost 100 years ago.

On 8 July 2014 a special gathering took place at the Napranum Aboriginal Council where Stuart and Roxane Scott, grandchildren of Presbyterian missionaries Herbert and Florence Mayer, along with Stuart’s wife Irene Scott, made the journey to return the artefacts which, due to their age, are now very rare and an irreplaceable part of the cultural identity of the area.

The Old Weipa Mission, also known as “20 Mile”, operated from 1898 to 1932 with Herbert and Florence Mayer as the missionaries from 1921 to 1928. In 1932 the mission was relocated to Jessica Point in the township of Napranum. The bell from the Old Weipa Mission now stands in front of the Uniting Aboriginal and Islander Christian Congress (UAICC) church in Napranum.

In Roxane’s reflections she said of her grandfather, “Herbert Mayer was a fascinating man—as a grandfather, he told the best stories and as a man he lived what many would say was the life of a dreamer, an inventor, an adventurer, a philosopher, and a man of God. Florence, his wife, was a gentle lady who supported her husband through all his endeavours. In her own quiet and capable way she made a huge contribution to the success of the mission and later in life.”

After the passing of their mother in 2012 the Scott family felt it was important to return the artefacts to where they belong after they had long been displayed in their mother’s lounge room.

Napranum mayor Philemon Mene said that while it was a small ceremony, it held a strong story in the hearts of the local people. A stirring moment was when Aunty Mary-Ann Coconut sang in Thanikwith language “Welcome to Weipa” “Ikki ikki bar thom a Waypa”.

Rev Davui closed in prayer along with Aunty Mary-Ann who prayed in Thanikwith language.

The mayor said the artefacts would be restored and kept in the new library.

Stuart and Irene are part of Stanthorpe Uniting Church and Roxane is a teacher in Boonah. 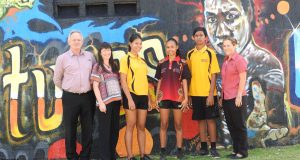 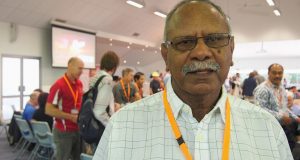 Living the covenant: room to grow in Indigenous connections