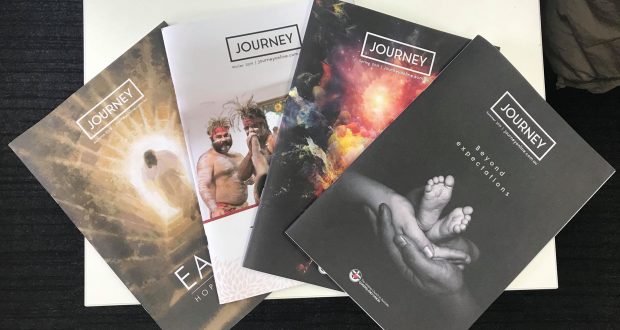 With another year almost at an end Journey editor Ben Rogers reflects on the year that was for the magazine and highlights some of the stories you may have missed from our last four editions.

Is it just me or has it felt like time has been accelerating at a faster rate over the past year? It’s as if someone has hit the 1.5x speed playback option and we’re all moving through life that little bit more quickly.

Events in the news that seemed like years ago are actually only a few months old. I was writing a feature this week and needed to reference a pop-culture event that I remembered being an early-2018 phenomenon; turns out it was only eight-months ago. My colleague was a little surprised when I said Scott Morrison was only elected mid-2019; for a moment we thought he had been in the job for years.

Looking back at this year’s collection of Journey I was a little surprised to see that some articles I remembered as 2018 ones were actually released in early 2019. It was a big year for us. We produced over 150 pages of content over four editions in 2019, covering stories from Queensland and beyond. We introduced a children’s activity page this year, new columns by Rev Peter Armstrong and Simon Gomersall, and transformed the dimensions of the magazine with added pages.

Our first edition of 2019—Autumn—was dedicated to Easter, with Simon Gomersall writing our theological feature exploring the death and resurrection of Jesus and how his story signalled we should never consider all hope lost in the face of dying. It was also the first time a Journey article has been able to reference both Kurt Vonnegut and Porky Pig. Yes, really.

Queensland has been no stranger to environmental disasters and Dianne Jensen covered how Uniting Church congregations are stepping up to support their drought-suffering counterparts in the bush in the same edition.

We also devoted multiple pages to substantial theological conundrums such as what do we do when the Bible says something we don’t like and does the “way” of Christ and his teachings constitute the authoritative Word of God?

Our Winter edition had extensive coverage of the 34th Synod including the election of Moderator-elect Rev Andrew Gunton, the launch of Project Plenty and the celebration of ministries worship service. We hit the beach and waxed our boards with SurfChurch, an innovative approach to worship which takes place on Bargara Beach and attracts dozens of people who can connect with God in a natural, everyday setting. And we took a closer look inside the mind of Carl Jung and his relationship with Christianity and the soul.

This year was the International Year of Indigenous Languages and Dr John Harrison took the opportunity to look back at those who did pioneering work to translate the Bible into Indigenous languages in Australia. We also covered the Queensland Synod’s launch of its Covenant Action Plan and what it means as we journey towards genuine reconciliation.

Spring saw us explore the concepts of science and miracles as Dr Victoria Lorrimar wrote on how an attitude to miracles serves as a litmus test for an understanding of how God operates in the world more generally. We met with Outback Futures, a great initiative helping build resilience and strengthen communities in the outback, whose genesis can be traced back to Toowong Uniting Church; and we welcomed Trinity College Queensland’s new principal, Dr Paul Jones.

Speaking of Trinity College Queensland, we reported on the college’s latest educational resource Trinity on Tap, which has opened up a world of theology for people who don’t have to step foot in a lecture room to learn more about the Bible.

Finally, our recently released Summer edition contained the usual reflections on Christmas, with Dr Paul Jones, Cath Taylor and Rev David Baker all writing on the importance of Jesus’ birth. Four Queensland Uniting Church members all shared the stories on how multicultural church enriches us all; we checked in with Trinity College Queensland’s Activate Gap Year Program; and visited Hatton Vale Community Uniting Church where members have formed a creative crafting group to serve others and model the love of God.

I’ve only covered a small sampling of what we wrote about in 2019 so I encourage you to take a look back at the four editions from this year and celebrate the full array of incredible accomplishments and fascinating people in this church.

In 2020 we will continue to provide the same level of editorial variety and will be there to cover all the news from the 35th Synod. We’re hoping to broaden our pool of opinion and feature writers next year but, as ever, we rely on your tips and contributions to let us know what you want to see more of in the magazine and who are the new writers we should be showcasing.